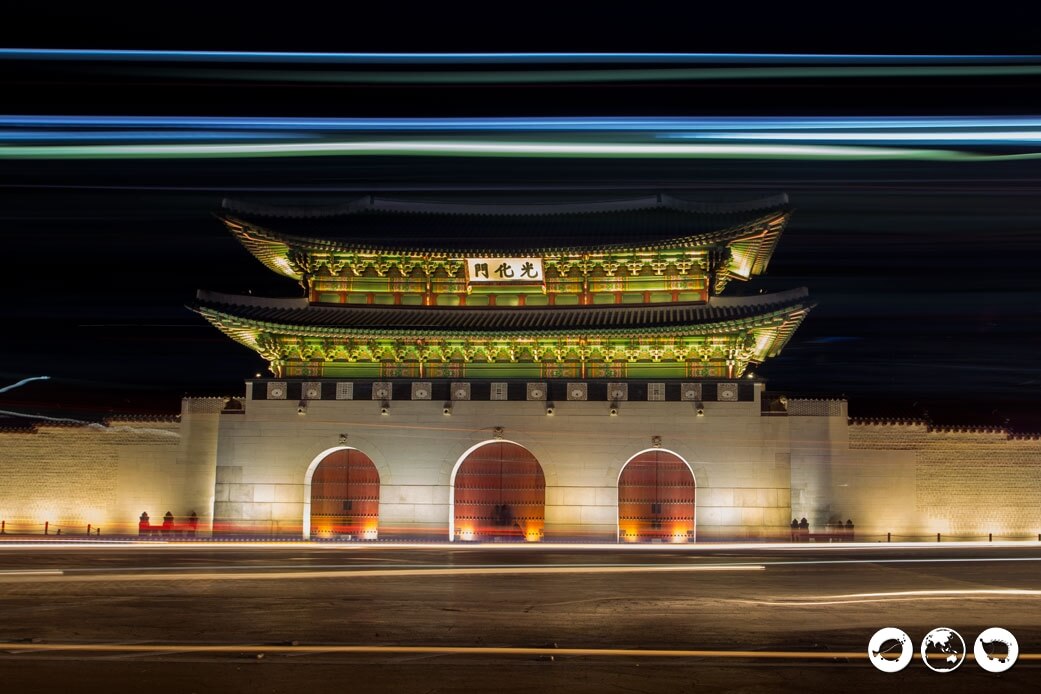 We had come the day before arriving at 6:30 thinking we would get the tickets. But we were turned away. Of course when we came back the next day, there was a torrential downpour that started at four. Armed with shorts, tanktops and soju, we had made a mad dash for the nearest convenient store while we were waiting in line for the tickets. Buying two disposable umbrellas, and two pancho’s for just a few bucks out by exit #5 (in case you need them.) They came in handy for about 10 minutes until the wind came up and broke our umbrella’s, and the pancho’s started ripping. Luckily there were enough bridges, ledges or coverings to block the rain while I tried to shoot some photos. 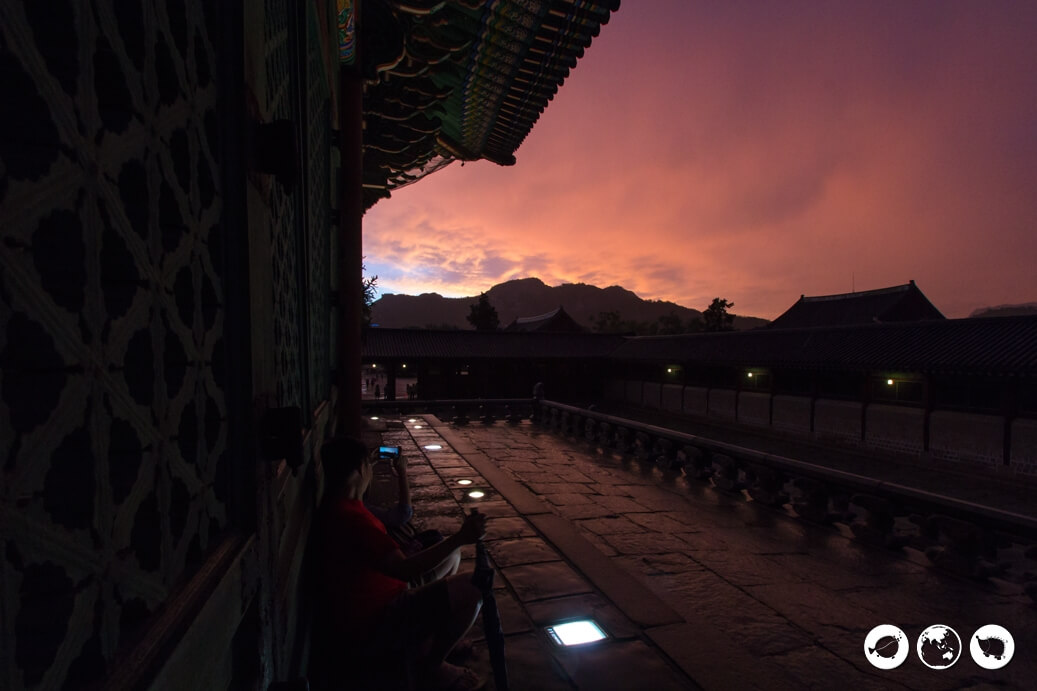 A couple hide from the rain as they snap a memory that will last for ever.

Couples everywhere were huddling up together underneath Geunjeongjeon Hall to try and get a glimpse of the beautiful night scenery and spleandor of Gyeongbukgong Palace at night. For the history buffs, Geunjeongjeon Hall is where important state functions were held. 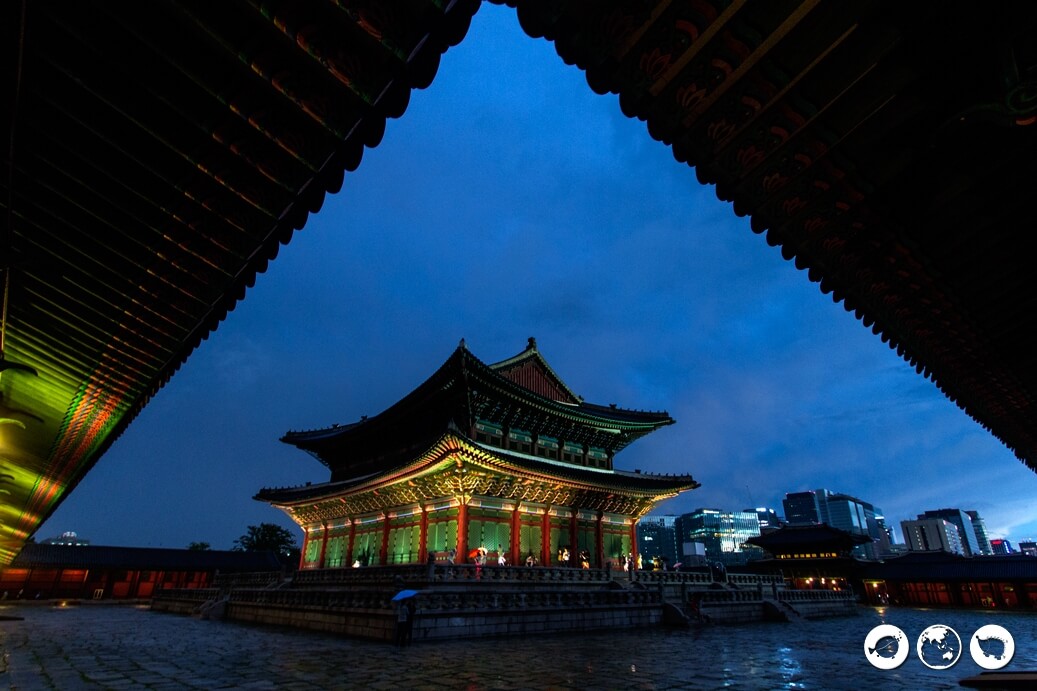 Admiring Gungjeongjung hall in the rain.

It was my first time at the palace during the night and it was an experience I likely won’t forget for a long time. They sky was changing within minutes. What began as a pinkish night, started fading into a beautiful blue with puffs of clouds. The clouds  were moving fast in the fierce wind which broke our umbrellas in minutes. 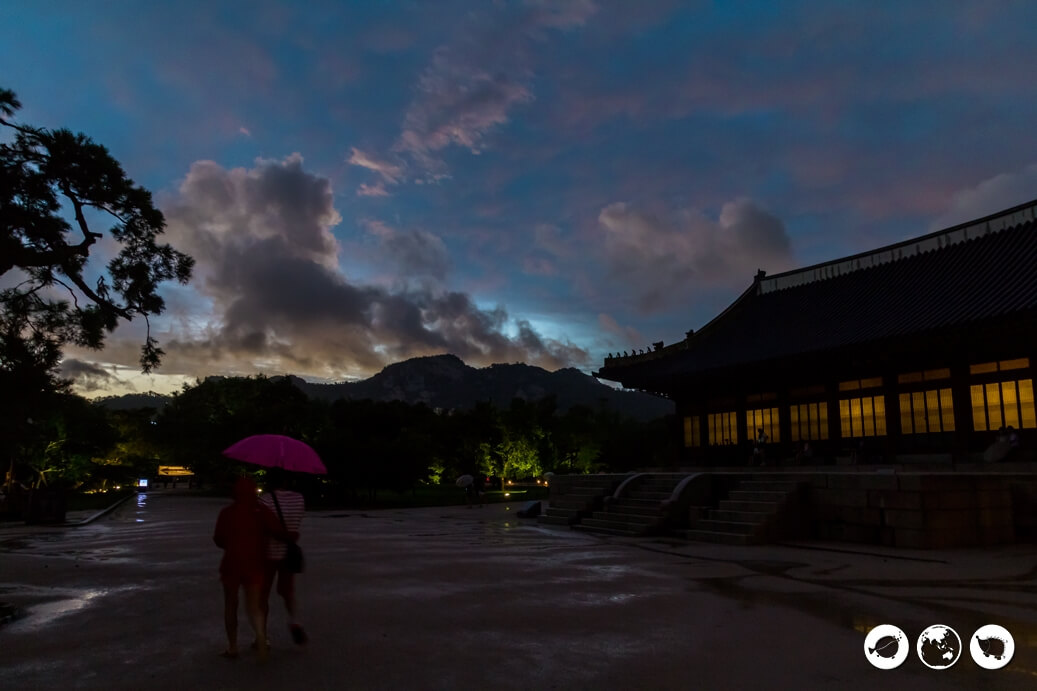 Couples huddling together under the dramatic sky trying to stay dry at Gyeongbukgong Palace.

We headed over to the Gyeonghoeru Pavilion, located on the west side of Gyeongbokgung Palace. Apparently this was where the king through giant feasts for court officials or foreign envoys on joyous occasions. It really is a beautiful place at night, lit up against the dark electric blue night. It was absolutely breathtaking. I knew I wanted a long exposure of this with the building and it’s reflection against that beautiful sky. But the night was falling fast and out of the 10 or so photos I took this one ended up being my favorite. 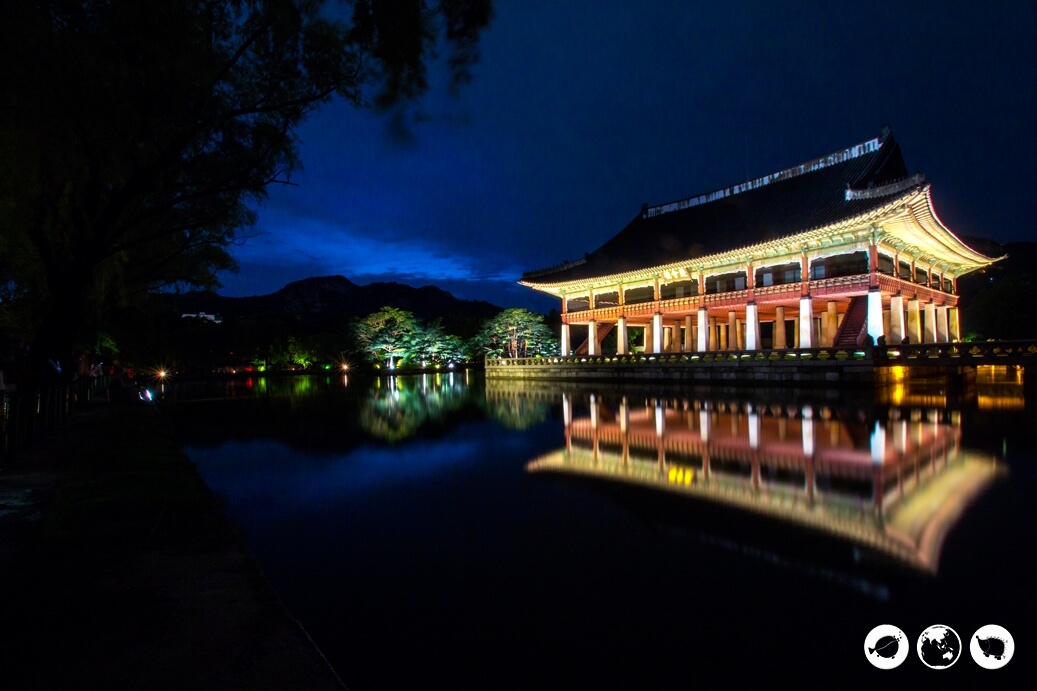 The reflections of Gyeonghoeru Pavilion during a rainy storm.

After that we headed back to the Geunjeongjeon Hall on our way out. The sky was fading fast and I wasn’t sure what to do. I had been watching these Lynda videos on composition of photography with Ben Long and he said keep working the shot. Move your feet. So that’s what I did and I am glad I did, because I ended up getting my favorite shot of the night. This beautiful reflection of the hall. To me it told the story of the history through the beautiful architecture as well as the reflection in the rain. I didn’t give it enough room to breathe, but I still love this photo. 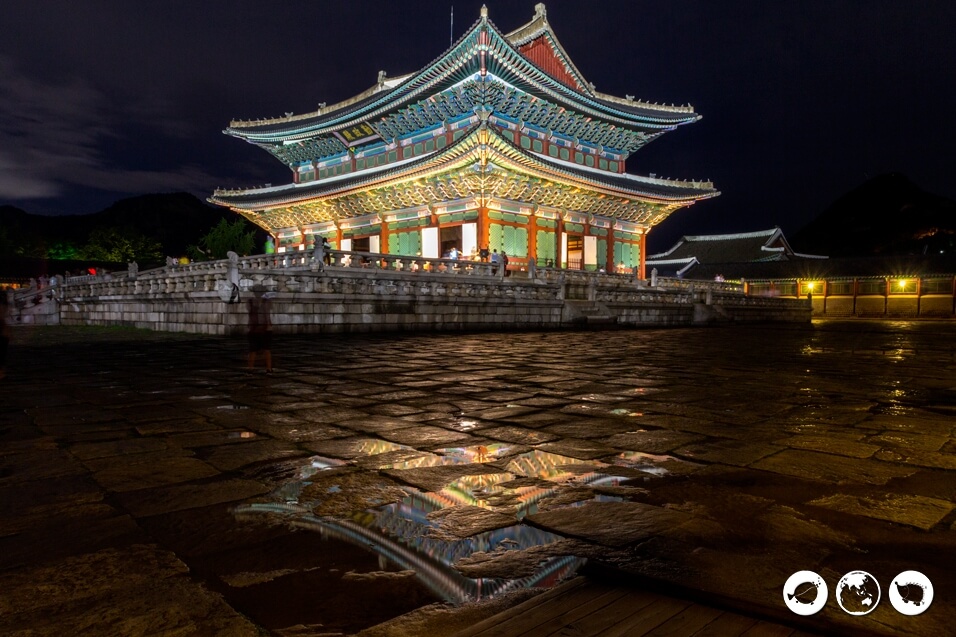 Reflections of the Hall on a rainy night.

With the night going almost pitch black there was one more shot I knew I had wanted to try. I saw a photo by one of my favorite photographers in Korea by the name of Sung Jin Kim. He took a beautiful geometrical photo of the roof of the temple against the sky and it was beautiful, simple, clean and I wanted to replicate it. Check out Sung Jin Kim’s stunning photo here. Again I rushed it and didn’t give myself enough room on the top. But this is my journey. 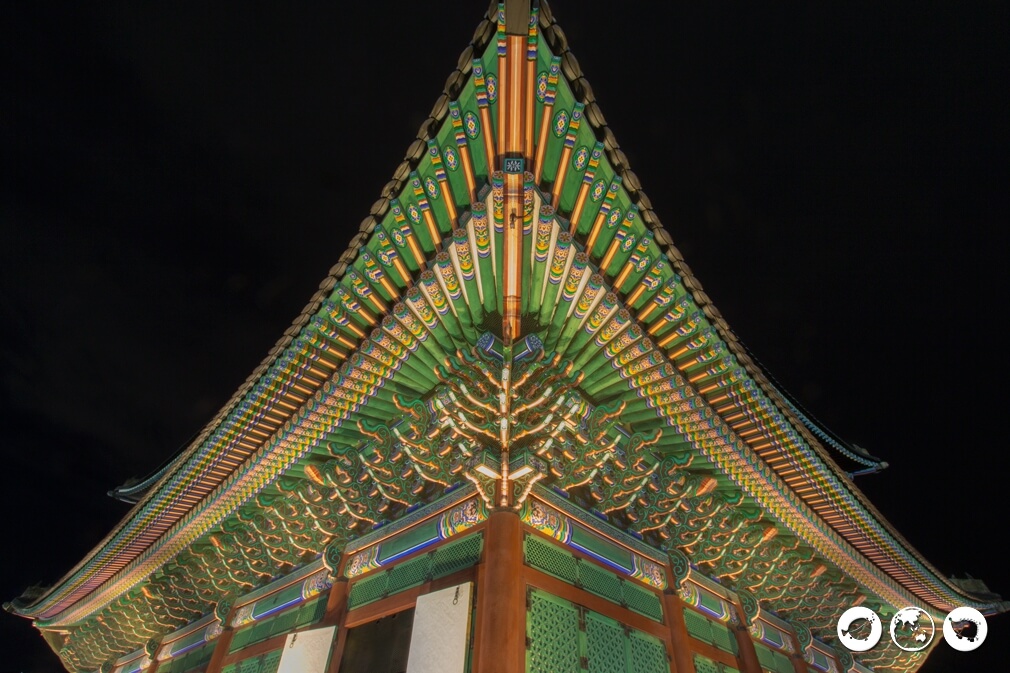 How to Get Tickets (Foreigners Only)

They reserve 55 tickets for foreigners. The closer you are to the end of the dates the earlier you will need to show up. To get tickets simply wait in the foreigner only line. There will be a countdown timer to see if you have a chance. Get there around 5 if it is closer to the end of the summer as there will be long queues.

How to Reserve (Local’s Only)-When: TBA-How: Online at (ticket.auction.co.kr) or call (+82-2-1566-1369).*If calling, you will be automatically connected to an operator after a short automated Korean message. *Limited to 2 tickets per person -Quantity: 1,000 per day-Admission: 3,000 won*Children 6 and under are free

For just 3,000 won this is a really fun place to go check out. Fortunately for us and our patience, we were able to have a great time and had some spectacular moments during our night excursion. The rain really made for some interesting photos and overall this is one of the more memorable experiences that we have had in Korea and will remember for a lifetime. 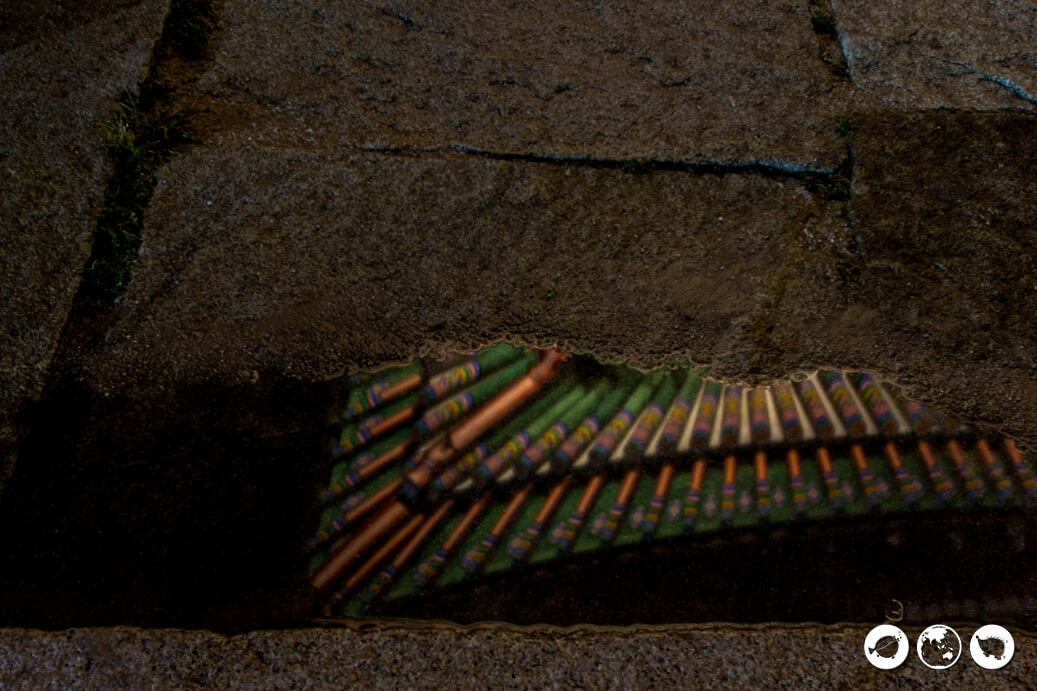