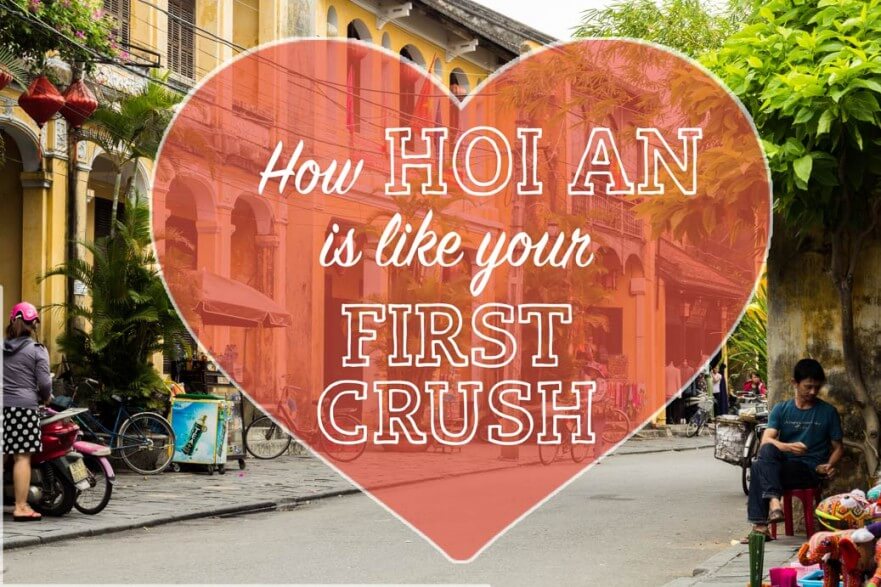 Hoi An is like that hot chick or dude that you were in love with in high-school. The one whose extremely good looks made the object of your affection as dumb as door-nail and have the depth of a puddle.

Hoi An made us dine ‘n’ ditch. That’s our story and we are sticking to it.

There is no doubt Hoi An is one of the most beautiful and charming cities we’ve ever been to.

It’s hard to move on from photos of sapa but it’s time. Here’s Hoi An. The city that started this whole travel bug for me. The one that we were planning on moving too. A place that’s really beautiful. On the outside. #cloudporn

I mean just look at how beautiful that place is.

However Hoi An’s beauty is skin deep. If you take a stroll down it’s old quarter to enjoy the architecture and beautiful town, that charm wears off almost instantly as touts are calling and pulling at you to go here, to buy this, to do this or that with no regard to you as a human being. 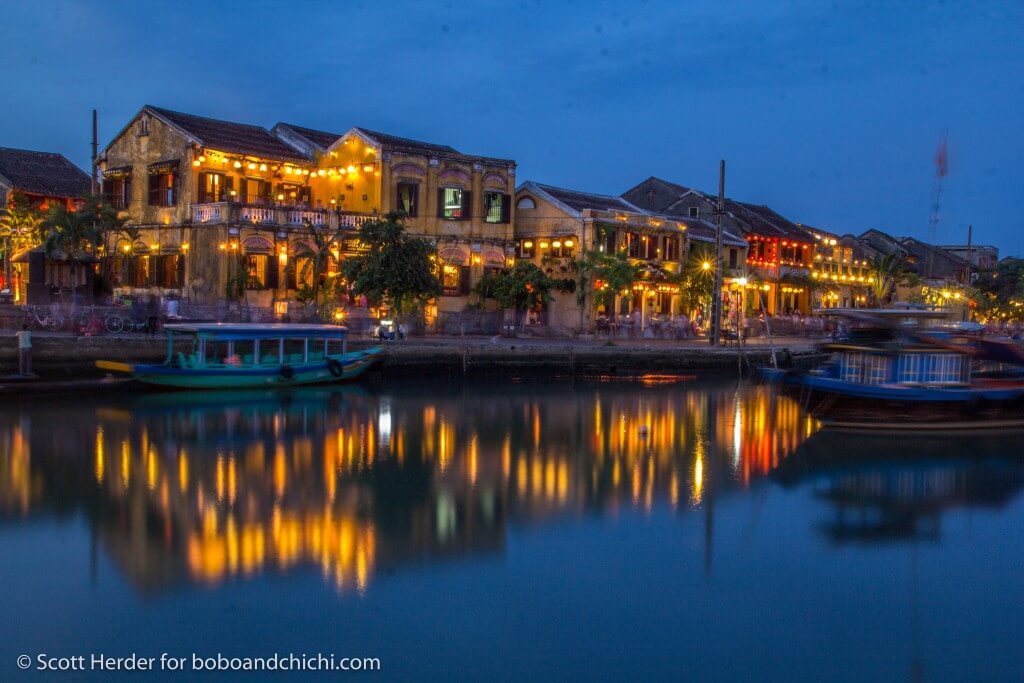 She looks great all dolled up at night too!

Don’t get me wrong, I understand this happens everywhere. But in Hoi An (just like that apple of your eye) they think you’ll do whatever they want, pay ridiculous prices, and buy just about anything just because their beautiful and treat you like shit. They will make things frustratingly way more difficult than they need to be, openly talk shit about how stupid you are, and overcharge simply because they think they can and don’t think you understand what they are doing. They think their shit don’t stink.

Not all places in Hoi An are as shitty as your popular high-school crush. But unfortunately, that is the exception to the rule.

There are a handful of delicious restaurants offering local dishes at local prices that are absolutely amazing. There are also decent tailors making fine clothing without a hassle, reasonable people not being pushy about selling their wares and a few awesome places to relax. Our favorite place to relax was reaching out. 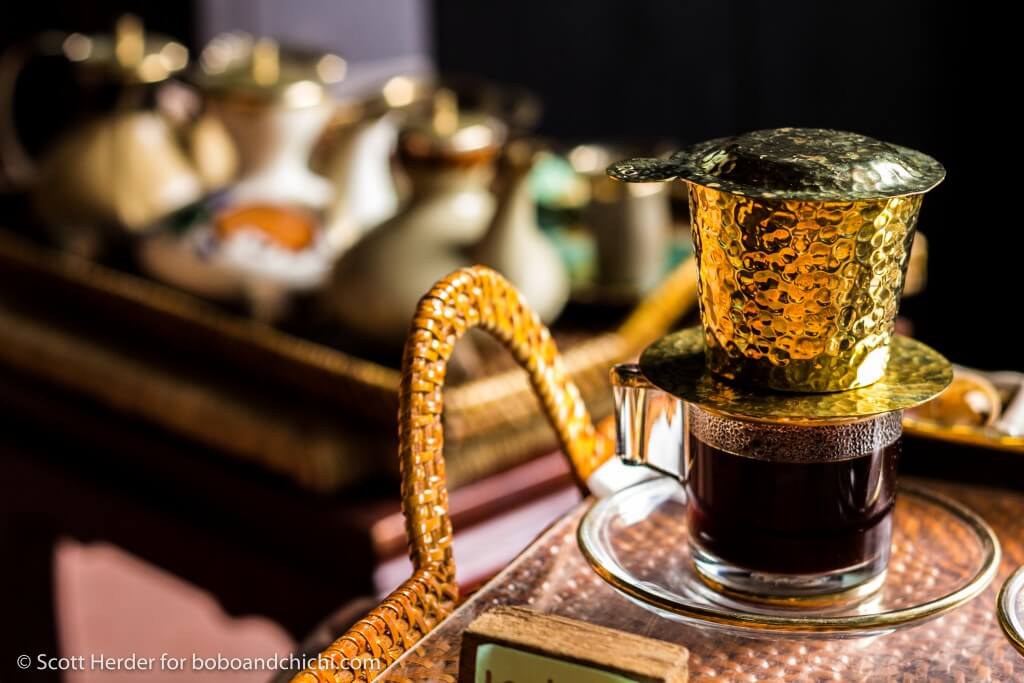 Coffee & Tea at Reaching Out

It seems as though the older this high-school crush is getting older the more and more she/he is trying to rip you off. Five years ago when I first came to Hoi An I must have had some serious blinders on, or things just weren’t this bad. Probably a mix of both.
See Also:  When Vietnam Crushed My Dreams

But one of the things I remember enjoying was the laid back beaches with relatively small crowds and an easy going vibe. 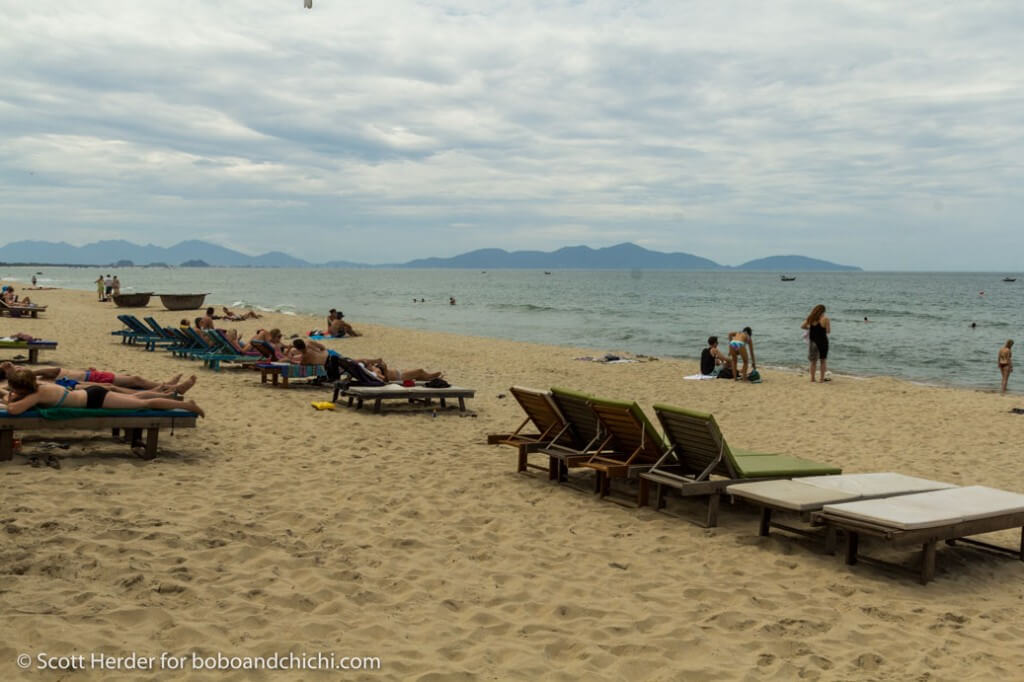 However when we went to the beach there was no easy going vibe, there were hoards of people yelling at you to pay for parking here, there or wherever. I didn’t remember this from before.

Then when we got to the beach there were tons and tons of beach chairs lined with tons and tons of locals yelling and running at you to get you to sit in their chair. Again didn’t remember any of that.

The deal was you could sit in the chair if you ordered up to 100,000 vnd at the restaurant. Ok, cool not a bad deal. I don’t like it, but at $5 the price isn’t too bad so we oblige and we have a comfy chair. But you can’t really enjoy it because the locals are running and screaming at others to sit right next to you. Not exactly R&R.

Within two seconds of agreeing to sit down we knew we made a mistake because the couple next to us was getting screamed at by three locals and eventually got slapped upside the head pretty hard with a clipboard for talking to another guest just explaining that she didn’t know she couldn’t use up her 200,000 vnd tab on alcohol. The lady who slapped her yelled at her not to tell anyone that and ordered them to go spend another 100,000 vnd on food. 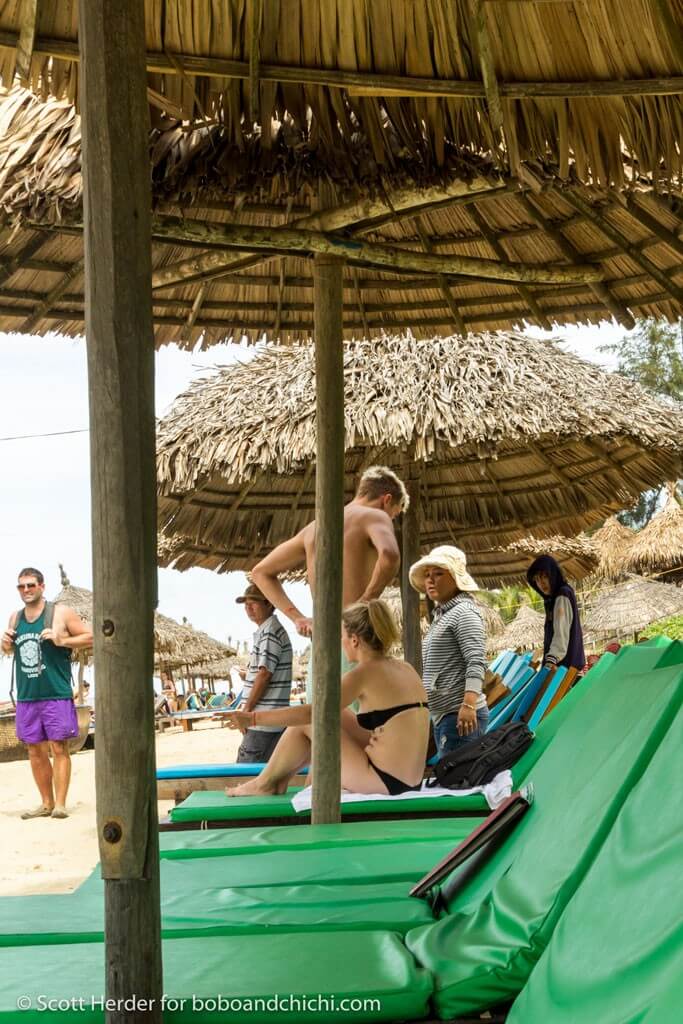 The girl in the black bikini just got slapped upside the head for talking to the dude on the left.

We wanted out of these chairs. But there were swarms of locals patrolling and they were all in on getting people to sit there.
See Also:  Postcards from a Passport

The couple wasn’t being allowed to leave even after paying the 200,000 vnd and were now getting frustrated. Totally understandable.

Then one girl comes down with her bike. Apparently, she either didn’t want to pay for parking or didn’t have a bike lock and parked her bike next to the chair she sat out. Two minutes later a cop comes up to her and with no warning or explanation shackles her bike to the chair demanding a huge fine and is threatening her. 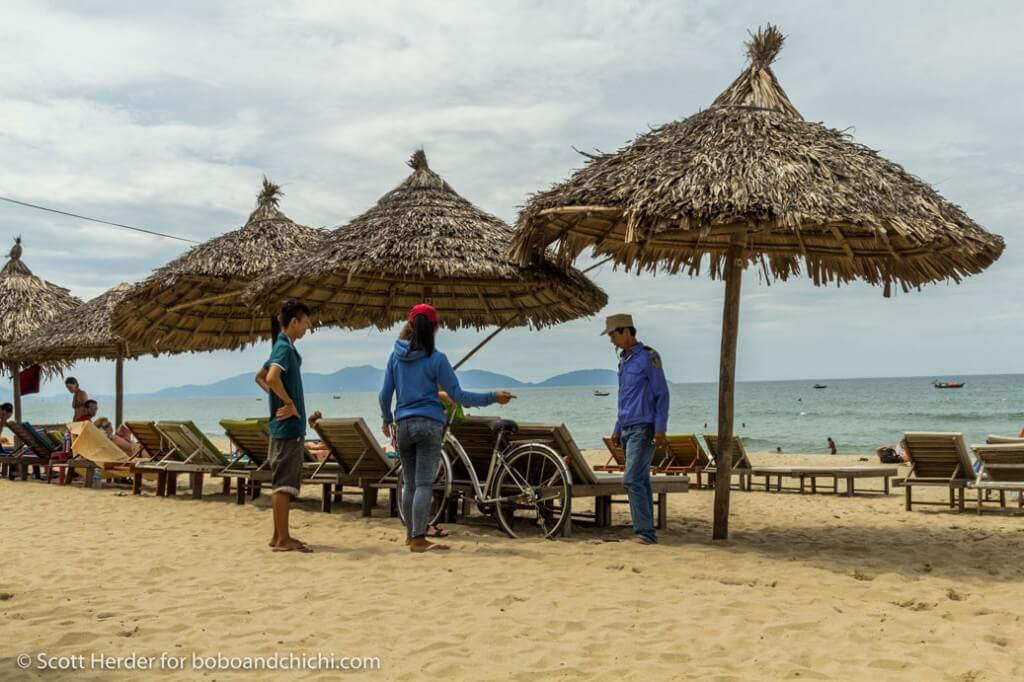 The beach looks like shit, nothing is relaxing, Megan and I want out. So I look around and realizing everyone is too busy hassling tourists to pay any attention to us. So we just stand up and walk to the restaurant like we are going to eat, and then we just keep walking to our bike and bike away.

Possibly the worst 15 minutes ever experienced on a beach. I will always wonder what happened to the others.

Lately there has been a lot of scrutiny about Vietnam and it’s failing tourism. After visiting it it would be tempting to say the way it treats it’s tourists is the problem. However that’s most likely a large oversimplification.

One thing I can say for sure is if you do visit many countries and compare how you were treated in Vietnam to the rest. You will probably realize 99% of the other countries were a lot easier in comparison. Vietnam is the place where you can go to hone your haggling skills, work on learning how to live with frustration, and just remember that every where else people treated you a bit better. Sometimes it’s nice to have the sour to make everything else sweet.

It’s kinda like when you first started dating and just didn’t realize what you really want in a relationship but were just in love with the aura surrounding that person. When you do move on from that first love things get a bit better.

What was your first travel love? Have you ever visited a place, country, or an ex even, just to wonder what it was you saw about it in the first time around? If you have share in the comments below.