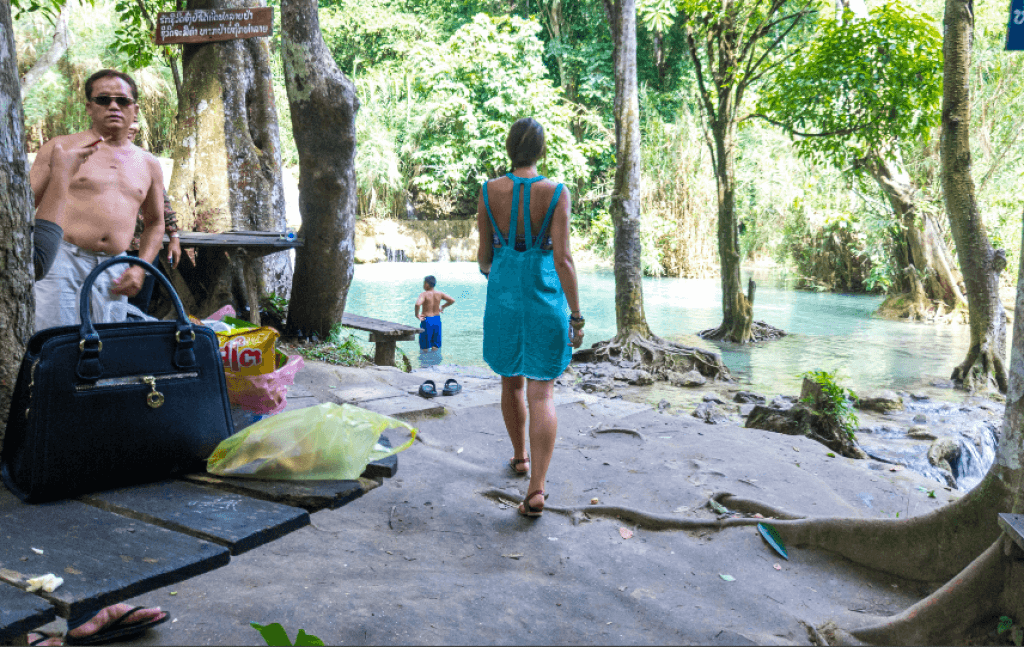 This Cool Guy is the Worst

This is number three out of five in our Walk With Us Series this week where we are sharing the stories behind the videos and celebrating instagram’s new update to allow full sized videos!

If you want to get caught up here is story 1 (The time Megan got her boobs slapped and cow poop thrown at her,) and story 2, (the time Megan really wanted to see the Silver Temple but no girls were allowed).

Now that you’re caught up, lets take you to Laos with us. About a 30 minutes drive away from Luang Prabang is Kuang Si Waterfall.  The falls are quite famous actually, they are these super duper, amazingly beautiful cascading turquoise waterfalls. Here’s a photo from our visit that I took that shows how pretty freaking neat this place is! 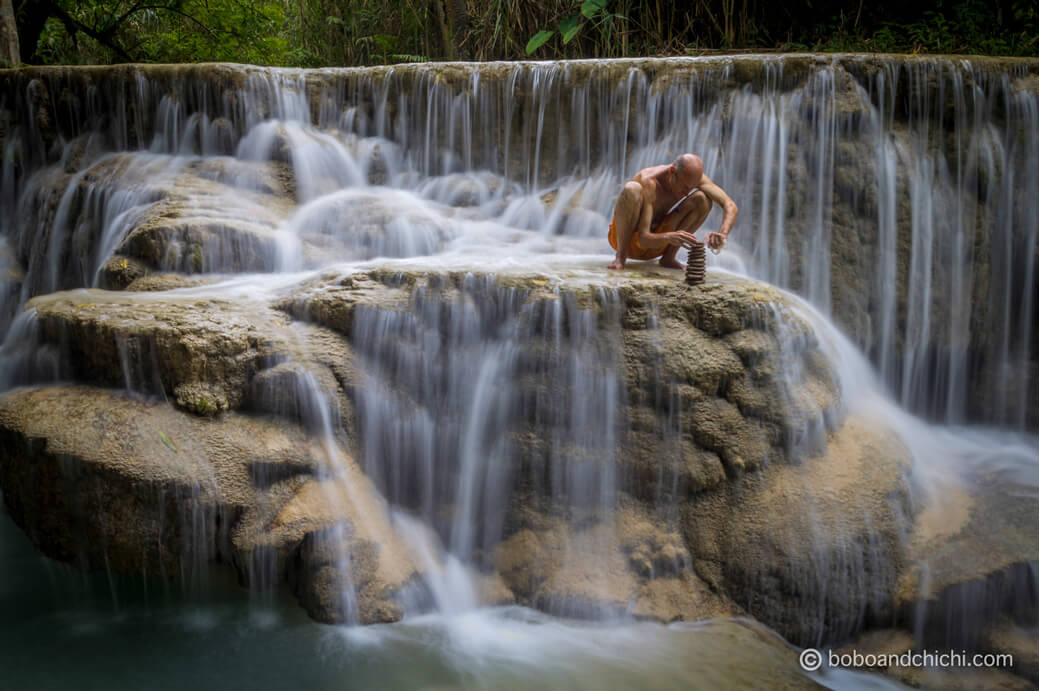 There’s dozens of these cascading falls. Not as many with golem.

We definitely wanted to remember this gorgeous little spot in our own unique way, so what better way to do it than one of these fun videos?

At this point, we’ve been doing these for awhile now and where it used to take 2-3 hours to shoot before now just takes about 20-30 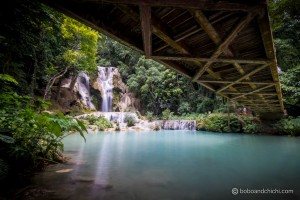 minutes depending on the scene.

We plan out our route and we are super excited about it, I mean look where we are at? We planned our day to arrive as soon as Kuangsi opened so we would have the first set of pools to ourselves. That was a great idea, in theory.

A group of about 10 tourists were also there. We think no big deal since we walk slower and they will probably move on by the time we get to the spot in mind. Kuangsi has tons of cascading pools to see plus a big waterfall and a hike to the top, we only had one place in mind. Again great thinking, in theory.

Well this guy is standing literally right next to us. Just laughing at us with his friends and family, repeating OK OK OK, and trying to get Megan to take a step before I do.

At first I tried asking him nicely to be quiet, then I tried shooing him away, then finally I just yelled DUDE STOP! I think I had couple other words to say as well. He played the card where he pretended not to understand me, took a few steps away and continued watching us. We were just passed the half way mark at this point.

It’s a shame he wasn’t a small little girl from Laos so that I could have easily scared with some monster noises, running and raising my tripod over my head. No this dude could have killed me, probably could have even eaten me. Plus he had an entourage. I was wracking my brain for things to do to get him to stop.

The annoyance continued, he did walk in front of us a bit, then back behind. Then the cat-calling towards Megan started. One time he got relatively close. When that happened I made an x in the ground to remember my spot and just showed him what we were doing. By scrubbing through all the photos on the camera he could get an idea of what we were trying do and maybe just leave us alone and go enjoy the beautiful scenery he and his family came so far to see.

It was here that I learned he actually spoke english perfectly! UGH SO MUCH FRUSTRATION! Now that he understood and we had a small moment of communication we thought he might back off a bit. 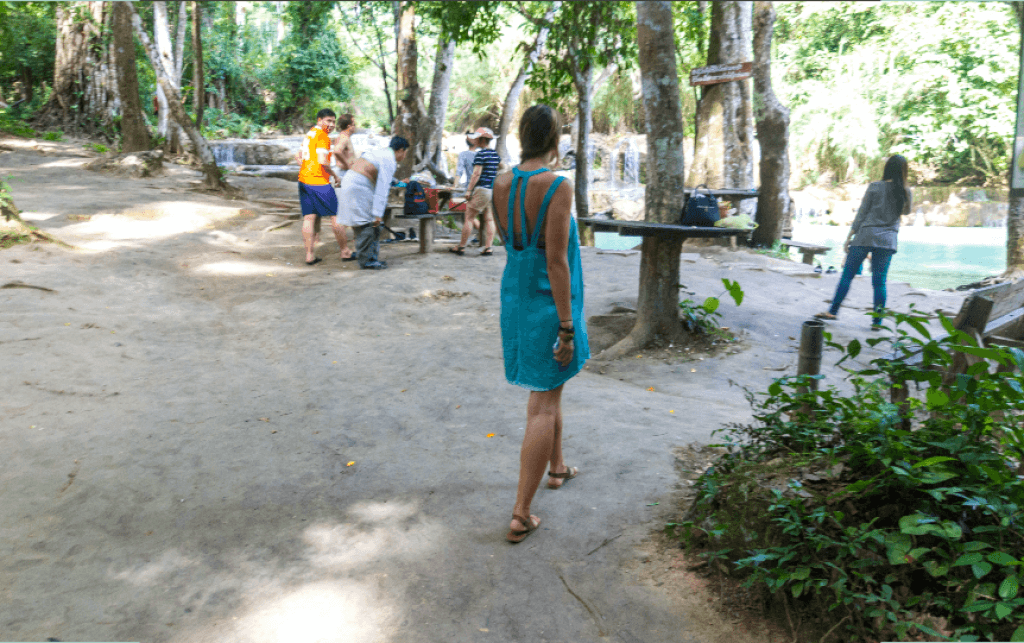 I made the mistake of telling them where we would finish our shoot! They were so kind they waited there for us!

NOPE! He only then explained to his family and friends what we were doing and wanted them all to get in the video and take pictures of us making this video. It literally looks like the two photos below almost the entire walk. Just most of the time they aren’t in the frame. [justified_image_grid mobile_preset=c2 row_height=400 gallery ids=”14020,14019″] 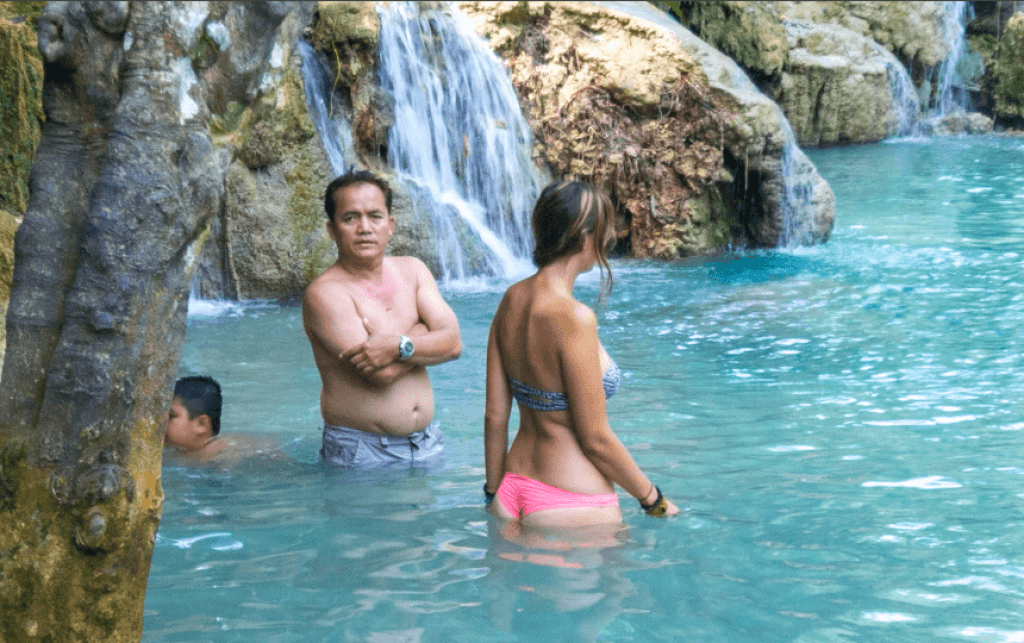 There is a special place in hell reserved for this dude!

You can actually see his family start to get in the video and take pictures of Megan and he is telling his kids where to get in the shot and what to do. Just unbelievably frustrating because this was happening the WHOLE ENTIRE TIME! Step by step. SERIOUSLY? Whodoes that?

Luckily, our video still turned out considering all the chaos going on in the background.

So here’s a kind reminder; if you see people trying to take photos, make a personal project, or just going about their own business, please don’t heckle them or try to ruin their photoshoot. You’re not making friends, you’re making a hardworking photographer and his girlfriend extremely frustrated. Thanks!

Without further ado, here is the video! Enjoy!

If you like these videos we share a lot more of them on our instagram account so connect with us there. I am working super hard on these and really trying to improve, so if you have any feedback, suggestions, ideas and or tips. I beg you to leave them in the comments below.