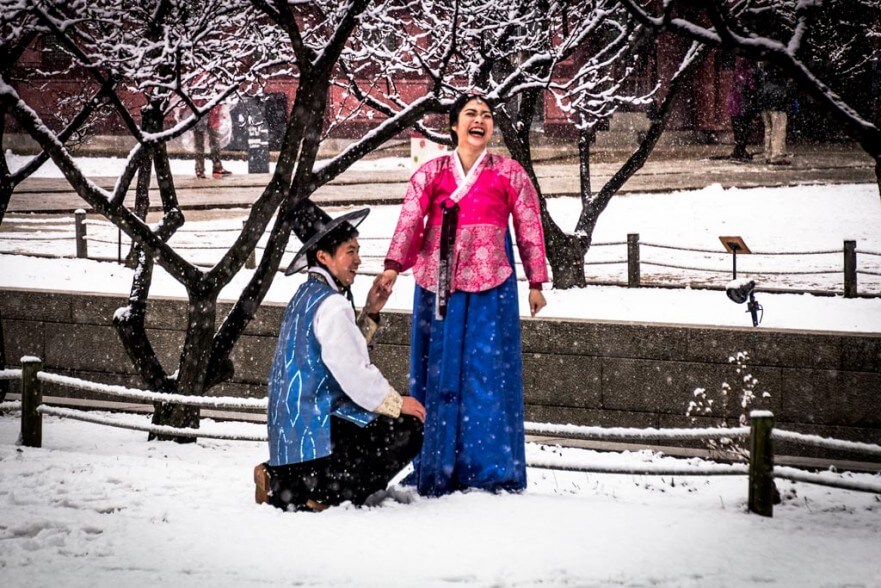 What do you do when you open the door and realize it’s snowing cats & dogs? Well we decided to take advantage of our time in Korea and visit Gyeongbokgung Palace and see what that looked like during the winter. We’ve been to the palace tons of times, but never during a snowstorm that we got. We wondered what Gyeongbokgung would look up all dressed in white so we geared up in some winter clothes, and headed there around 3:00 pm.

We got a cold, exhilerating greeting from Gyeongbokgung Palace. 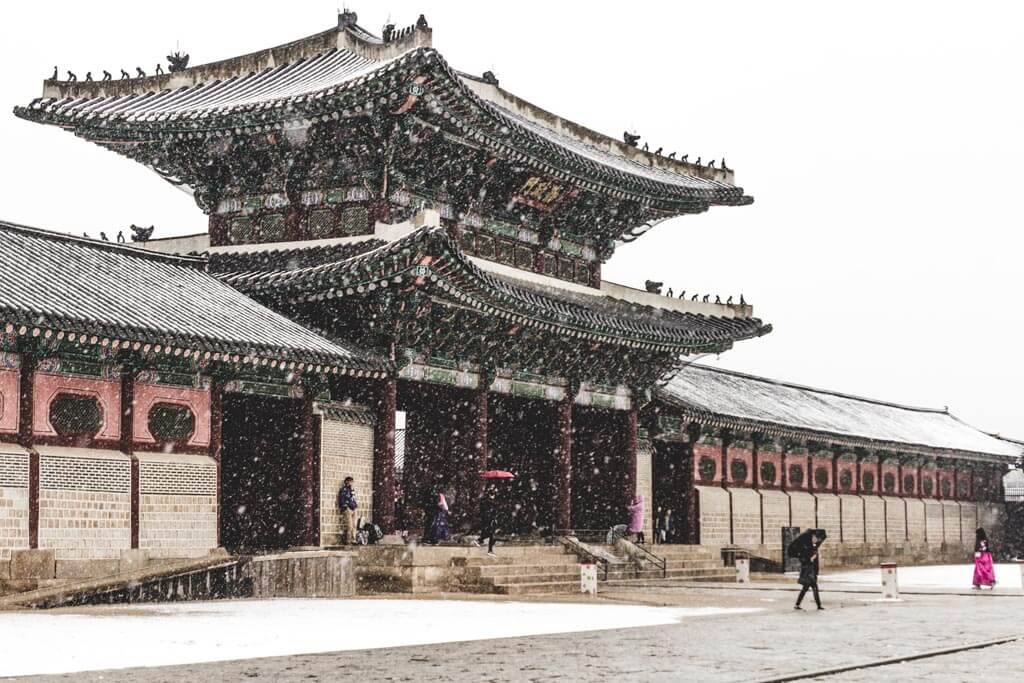 Surprisingly the place was filled with people having professional photographers doing portrait sessions with them. I was completely jealous. What a fun, romantic, and memorable day to have your portraits done. I couldn’t stop wondering if they did it on purpose and were super excited or if it was just luck. If it was luck, were they happy about it or sad? If it were me I would be elated to have such a fun memory as my photo-shoot. 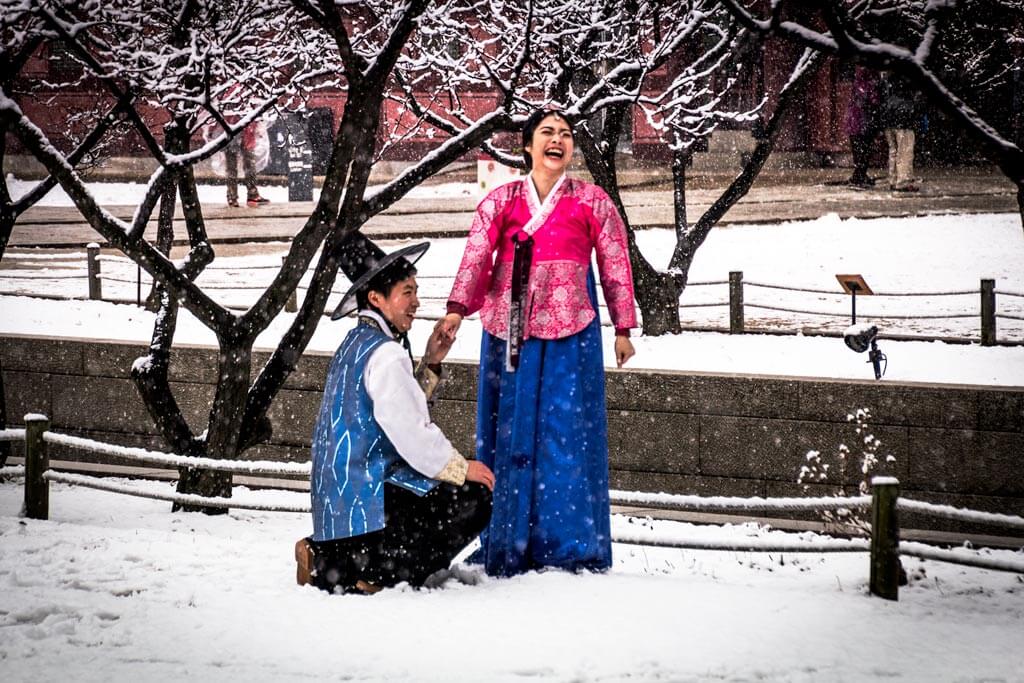 I wanted to make this our location for week 9 of our mini Hyper-Lapse a week project for instagram. I also really wanted to use a technique I saw from the video “Watchtower of Turkey” by Leonardo Dalessandri. He has a bunch of transitions I want to try and learn to make my videos better, which luckily for me he explains in some detail in this post. The first one I thought I could pull off was a sky transition. I will be trying to pull off many of these transitions in the following weeks until I can learn how to best utilize them.

We thought all the people in hanbok were the real stars of the show. Also I have shot a lot in Gyeongbokgung and thought I should do something different. I wanted to show how much it was snowing, our location, and then what people where doing there. Since a majority of people were doing professional shoots we thought we would show that, and the contrast of people taking selfies in the snow. The common thing I saw was how happy and how much fun everyone was having. I wanted to show that. 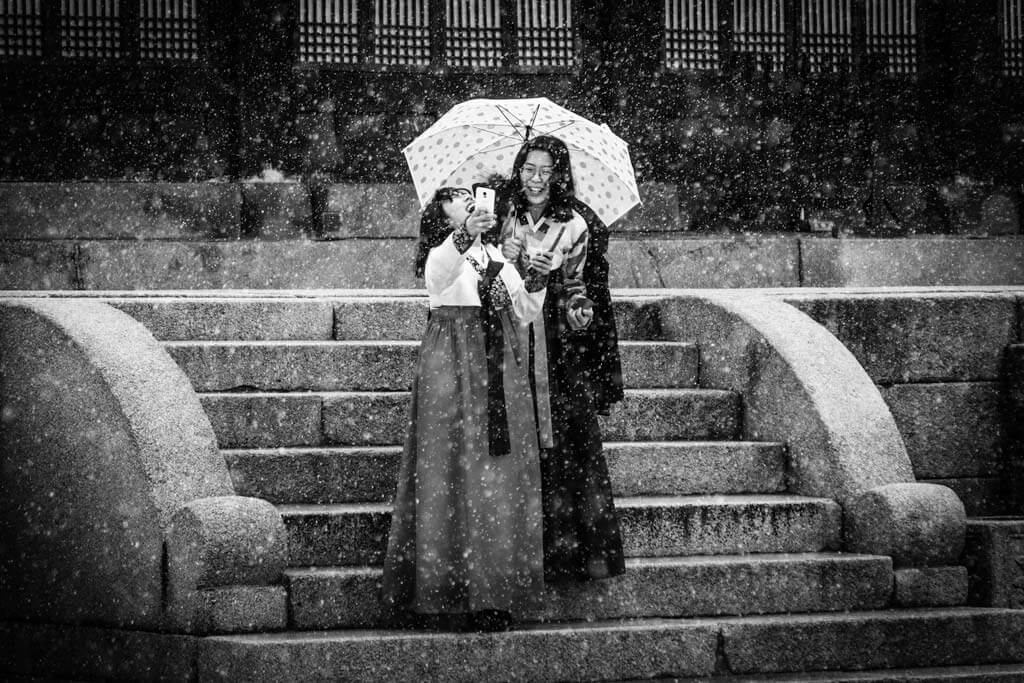 Girls Laughing Taking Selfies in the snow at Gyeongbokgung Palace

I was happy the sky transition during that shot. I was hoping to do a few fun transitions with Megan spinning out of joy in the falling snow and everytime the umbrella covered the camera it would reveal a new location. However we arrived to late and as 5:00 came we were kicked out. Not before begging a guard to let us do one final spin. 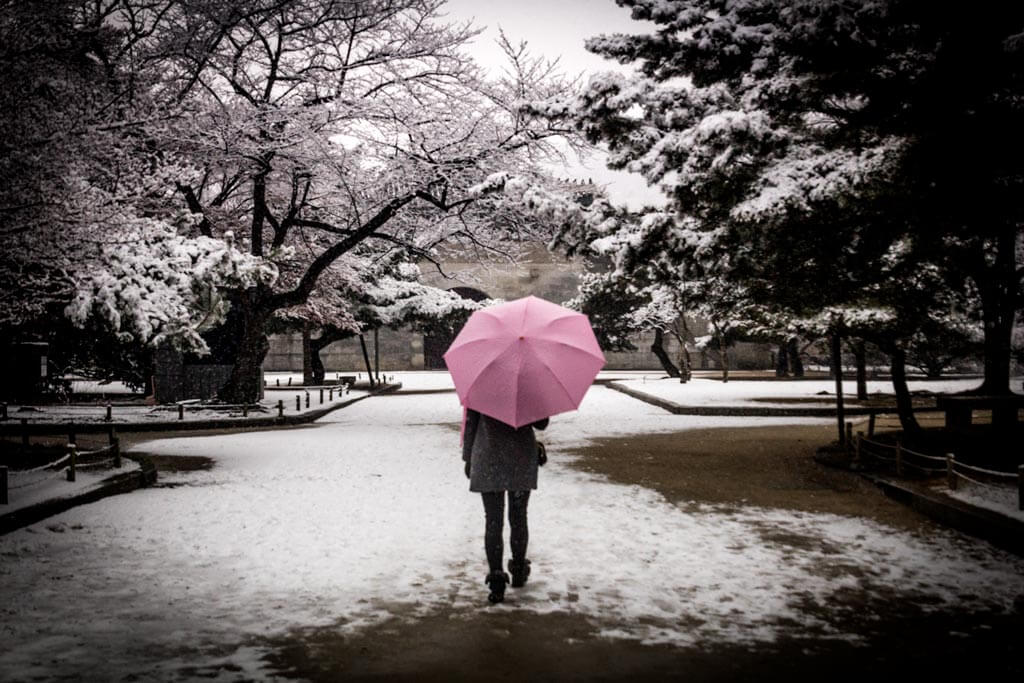 All in all it was a beautiful and fun day. Coming from Southern California I never see snow, especially in my own backyard so it was a special moment to be able to walk through a historical monument and watch so many people having fun in the snow.

Here is the video.

Tech Details for the Hyper-Lapse

If you would like to know more information on how to do these type of Hyper-Lapse video’s sign up to get a free E-book. Make sure you sign up now as it will only be free the first month it is available. You can sign up for the E-book here.

You may also like this lovely 30 second montage of Time-Lapses taken from Gyeongbokgung Palace.

Time-Lapse at Gyeongbokgung Palace from Scott Herder on Vimeo.

If you like this post please consider sharing it with your friends. It would make our day!