While scrolling through the interwebs we stumbled upon a group tour going white water rafting and visiting the DMZ. To be completely honest, we aren’t ones who prefer group activities. We don’t like being rushed or treated like elementary students who have to wait in a single file line until it’s recess time. That’s how we felt when we did the Parting of the Sea Festival in Jindo and it’s also how we felt in Vietnam’s Halong Bay cruise.

It’s one of our last weeks in Korea, which would usually mean that we would steer clear of such a group activity, but perhaps it was the makgeolli we were drinking when we made the decision, because we realized we both wanted to experience Korea’s white water rafting and spy on North Korea one more time.

We started our morning early meeting up near Jamsil in Seoul where an old tour bus, looking like it’s on it’s way to retirement and about to get shipped off to Laos, was waiting for us. Inside this old bus it instantly took us back to memories of long bus rides in Laos, home of old jalopy Korean tour buses with their colorful curtains with gold tassels hanging all over the place and windows that don’t open. This made me nervous as I get motion sickness and could use some fresh air on stuffy bus rides. 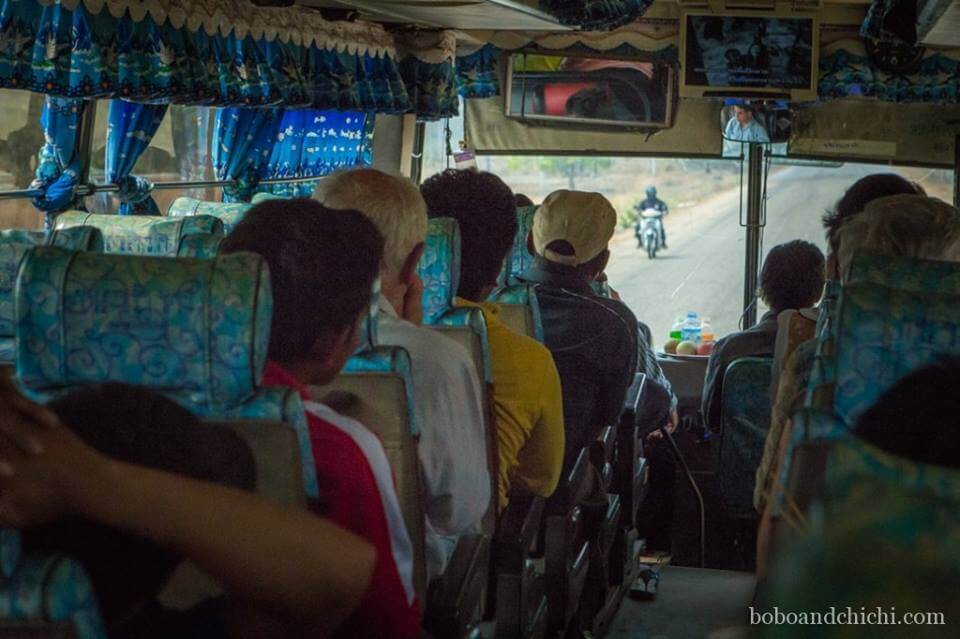 This is a typical retired Korean bus in Laos

After about 2 hours of inconsistent air conditioning, we had made it and the two of us couldn’t be happier as the motion sickness was starting to kick in hard. We had made to our white water rafting spot in Hantangang, just a few kilometers shy of the North Korean border. 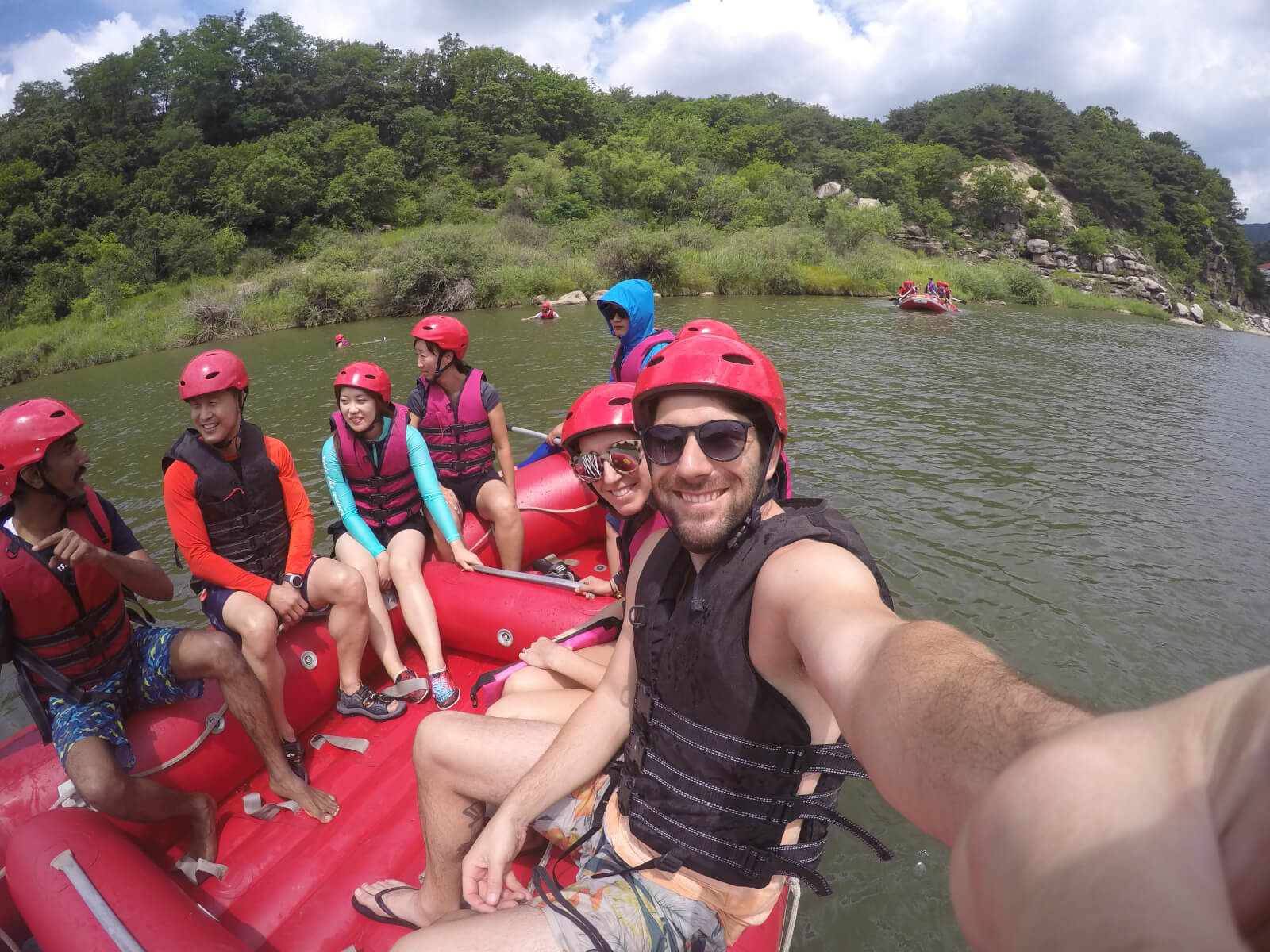 The river rafting experience started out a bit slow. It wasn’t so much extreme as it was relaxing. But as time went on we did hit a few rapids which made the ride a little more exciting. We ended up loving the view and we couldn’t have had better weather. The skies were blue and the birds were chirping. On our last rapid we got to put our waterproof bag to the test as our raft got stuck on a rock and filled almost completely to the top with water while one of our passengers flew out! 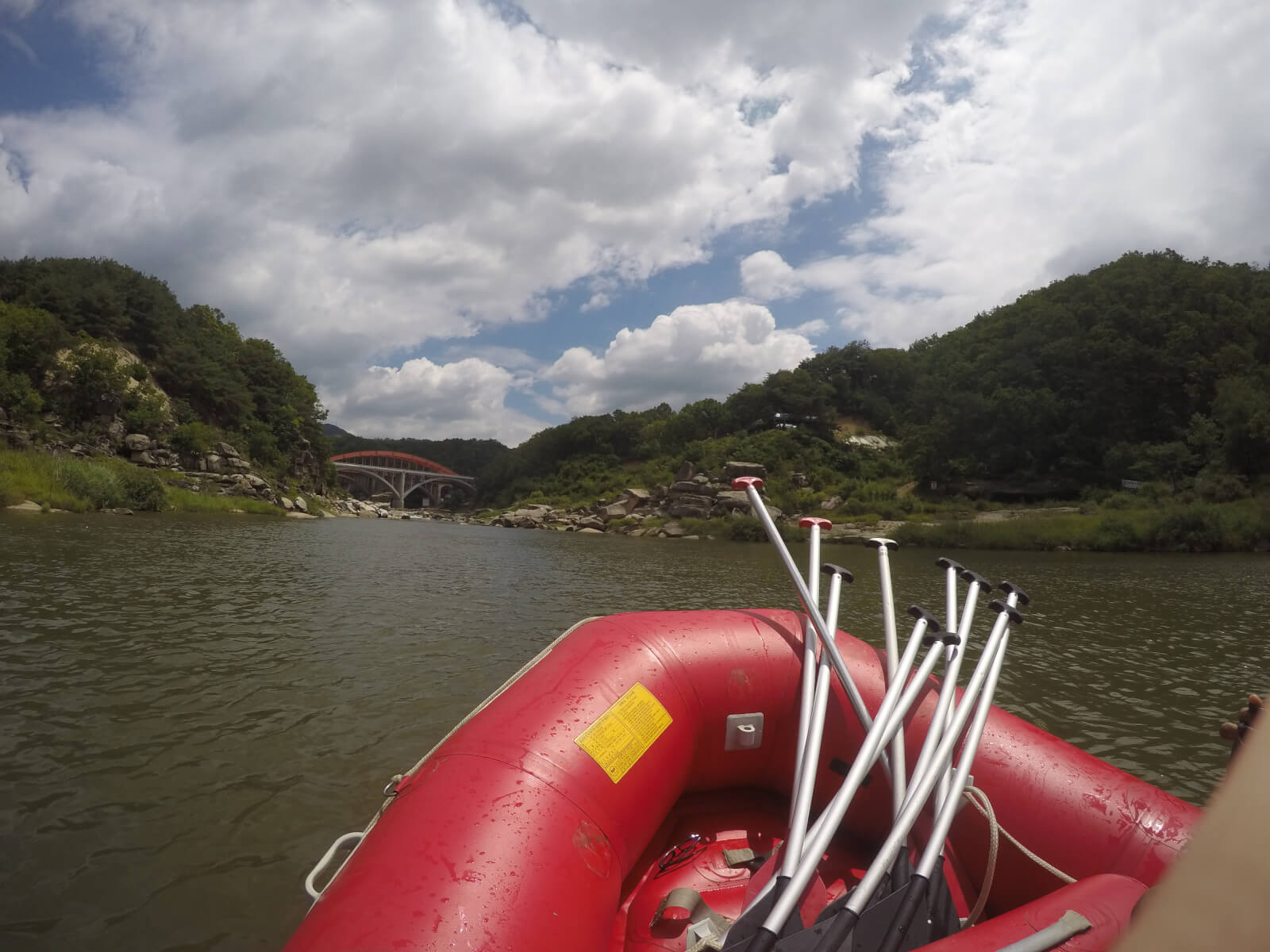 After a quick makgeolli and rock jumping break (you know you’re in Korea when there’s a makgeolli break!) we finished our journey just in time for a quick lunch before we head over to the DMZ tunnel and observatory.

We barely made our deadline for check in to see the 2nd Tunnel at the DMZ that North Korea used to sneak troops into South Korea for attack. The tunnel itself wasn’t even discovered until 1975 and now is a popular tourist attraction.

Upon arrival, after driving through several military check points, you will be handed a white hard hat helmet by a solider. We were perplexed by this at first, then we entered the tunnel and realized how low the top of the tunnel actually was.

We walked a good 10 minutes hunched over like Quasi Moto bonking our heads every few steps on rocks jutting out from the top. Now we appreciated those silly looking white helmets! Scott took a few tumbles when he bonked his head in the tunnel.

When we made it to the end there was another tour group finishing up listening to their guide. We didn’t have a guide, but were nosing our way around the tunnel until we got scolded by the speaker telling us not to take photos. A little too late, as all 40 people down there had been taking photos the entire time. Whoops!

After heading back up we were getting rushed back to the bus to make it to the Cheorwon Peace Observatory which was another 15 minute drive away. Once we arrived to the top of a short, steep hill we entered the Observatory.

It’s very similar to the one we visited in Paju, except the view here was nothing but gorgeous, rolling green mountains. We were shocked to see how beautiful these “untouched” looking mountains appeared. Like Paju, there was one small propaganda village, but it as barely visible even through the binoculars. Other than that, the place looked more like a nature reserve. A nature reserve that you would get shot if you took one step too close!

After snapping a few phone pictures, everyone was scolded by the same lady from the 2nd tunnel to stop taking photos. We were unsure how strict these rules were since everyone was taking photos, and if it were a serious matter they would have more than an independent tour guide telling us to stop. So we didn’t feel so bad about breaking her rules.

See Also:  Is It Easy To Get a Job Teaching English In South Korea?

Like the rest of the day with a big group, our time here was a bit rushed due to having to herd us around back on to the bus. (I would be terrible at organizing a group tour I realize! Having to keep track of alot of people looks stressful, so while I may complain about group tours, I realize it’s a job I wouldn’t be able to handle!)

Before leaving, Scott and I were able to buy a bottle of North Korean soju. In case you didn’t already know, we freaking love South Korean soju and drink it frequently as well that we create our own mixed drinks with them! So we were feeling pretty excited to get our lips on the bottle of soju from our angry neighbor up north! To our surprise, it tasted like CRAP that lingered in our mouths for 2 entire hours. This taste is something I never want to experience again so help me God. It’s NASTAY. We even let a fellow member of our group try it to make sure our taste buds weren’t off that day, but he agreed that North Korean soju tasted like 100% butthole.

Check out our video of us going through the 2nd tunnel to North Korea, with Scott bonking the heck out of his head, and our visit to the Cheorwon Peace Observatory! If you like the video, consider subscribing to our YouTube channel for our latest videos!

You can book this same tour at a discount through KKday in advance!