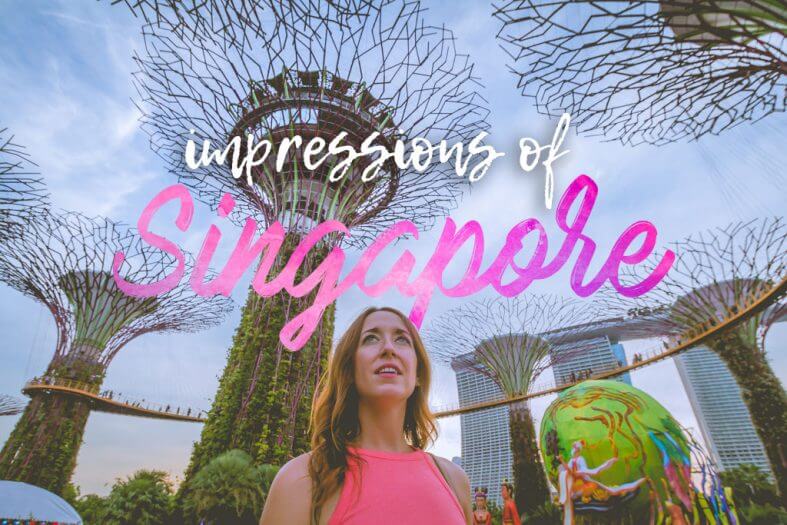 We spent a total of six days in Singapore and it just wasn’t enough. This swanky city is something unlike anything else in SouthEast Asia. With influences from all different cultures from the people, food, and architecture as well as English being widely spoken – after spending a few years living in South Korea and traveling around Southeast Asia, Singapore felt different.

Our first days were spent walking everywhere by foot. Our dogs were barking pretty hard at the end of everyday. What made things more difficult would be that the Grand Prix was here during our visit, which made it difficult to walk around as the race track was smack dab in the middle of where everything is near Marina Bay Sands and Raffles.

Here are our impressions of Singapore.

Check out the best things to experience in Singapore as a first timer!

Because of people from all different cultures and backgrounds living in Singapore you can easily find delicious cuisines from all over the world. In a city that has plenty of luxurious and higher-end options, we especially loved the food courts where you could eat top-notch food for as little as $2 per person.

We found ourselves obsessing over the Indian hawker stalls and ended up being our go-to almost daily as the Indian stalls kept calling us back for more.

We also were big fans of the Thai stands where we would each eat a big, savory bowl of green curry – a back to back hit for us!

The different Chinese dishes we tried were also incredible!

We really didn’t even have a mediocre meal here, every meal was a knockout, and we could have easily extended our stay just for the food alone.

Singapore also has a food court hawker stand that has 1 Michelin star! We screwed the pooch by waiting until our last day to spoil ourselves with our first Michelin meal to find that the stall is closed every Wednesday! Rats!!

Check out all the vegetarian food in Singapore too! 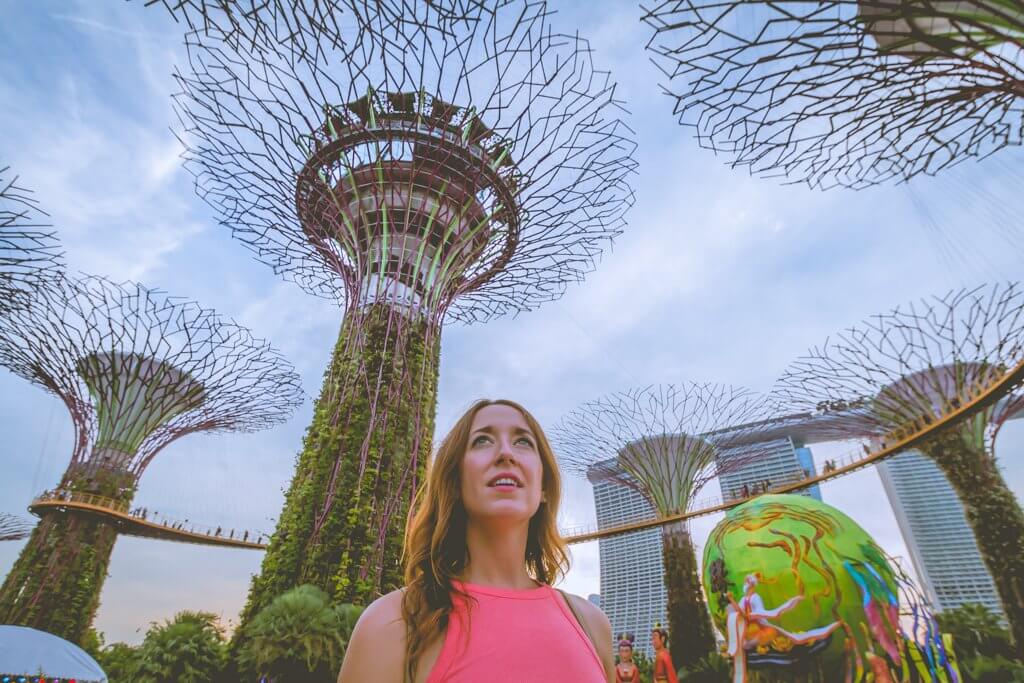 Not that we ever expect other cultures and countries to speak our native language, we loved being able to communicate with people here at ease because English is widely spoken.

After extensively traveling to foreign countries where we had language barriers because we only knew basic phrases or communication (which is surprisingly pretty easy to get by still)  this was a convenience for us so deep into our trip half the world away from home.

We found every person who we encountered to be friendly, if you asked for help someone would gladly try to at least answer you, it was a very welcoming feeling.

It was interesting to see so many different cultures living together in the same city.

It had been a while since we have seen so many cultures combine somewhere. Even though most ethnicities stick to living in their own enclaves in the city.

We loved being able to explore areas like Little India and Chinatown and being able to visit and admire all the different temples. We also loved exploring the markets and doing research for future meals around the food courts! 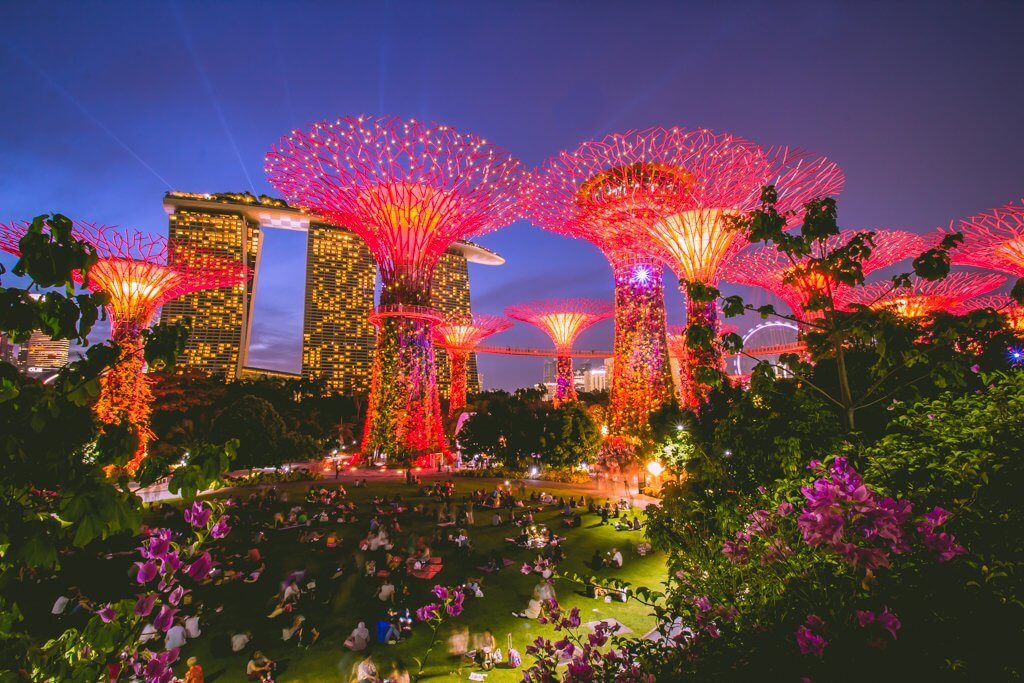 The buildings and architecture here are something to truly admire and are unlike anything else.

For example, Marina Bay Sands is unique in that it’s three high rise buildings connected by a giant observation deck with one of the world’s most famous infinity pools.

Then you have the Gardens by the Bay, which is unlike anything we’ve ever seen before, where giant supertrees grow plants vertically that generate electricity. Those same super trees put on a daily light and music show from that same energy as well! We really loved the show as well, the music for the Garden Rhapsody show, “Journey through Asia,” was brilliant and it was interesting watching the lights dance to the music.

We also loved walking around and looking at the unique high rises that all had something different. You’d see some that give off the appearance of different layers twisting around as if you were to twist your Jenga block tower, buildings that had full-on jungles growing out of it, and buildings that had an ombre effect of colors on the entire side of the building to name a few examples.

We don’t think there was one ugly building here, if there is one you don’t notice it against all the awesome ones!

Another aesthetic aspect we loved about the city would be the juxtaposition of older and modern architecture mixed throughout the city.

Because of colonization, you’ll also notice the mix of colonial architecture in the city as well. 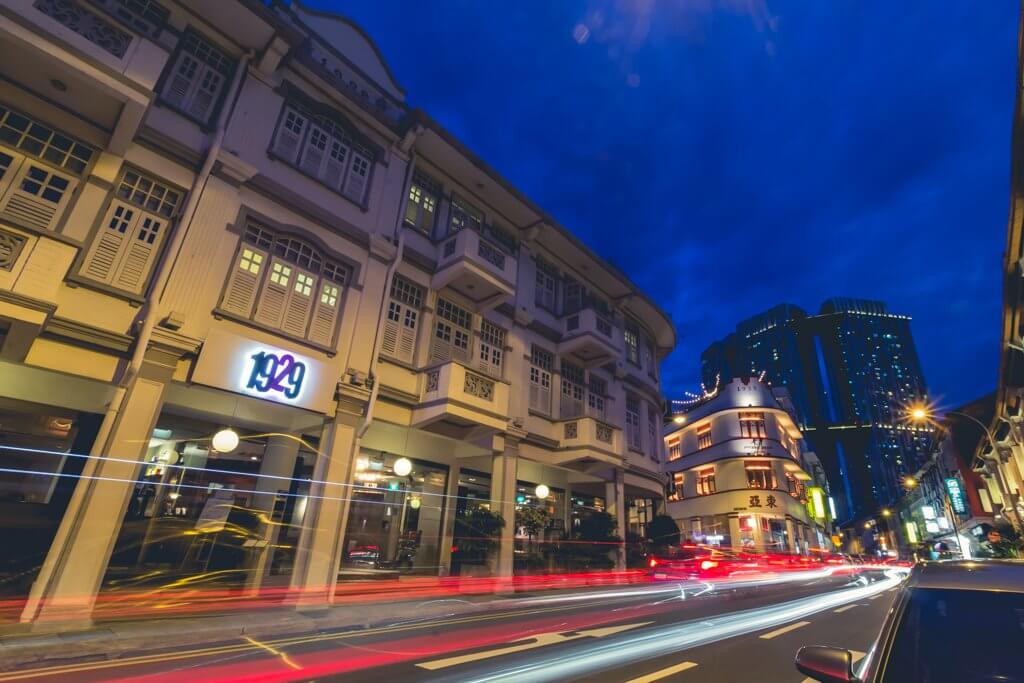 We didn’t want to commit two years to one place at that point in time. After visiting we did reconsider that thinking for just a second.

The only negative about Singapore would be how expensive things can be, we would love to come back down the road with more of a budget to enjoy more of the finer things in Singapore like staying at Marina Bay Sands or the historic Raffles Hotel.

At the time of our visit, we were budgeting carefully making sure that we spent at local businesses and supporting within our tourism dollars, but also being savvy with our money and traveling within our means at the time of that trip.

That being said, we will be back Singapore

Have you ever been to Singapore? What were your thoughts? Share in the comments below, we’d love to hear all about it!

Check out where to stay in Singapore for your next trip! Also, check out this post for backpacking in Singapore by the Broke Backpacker.