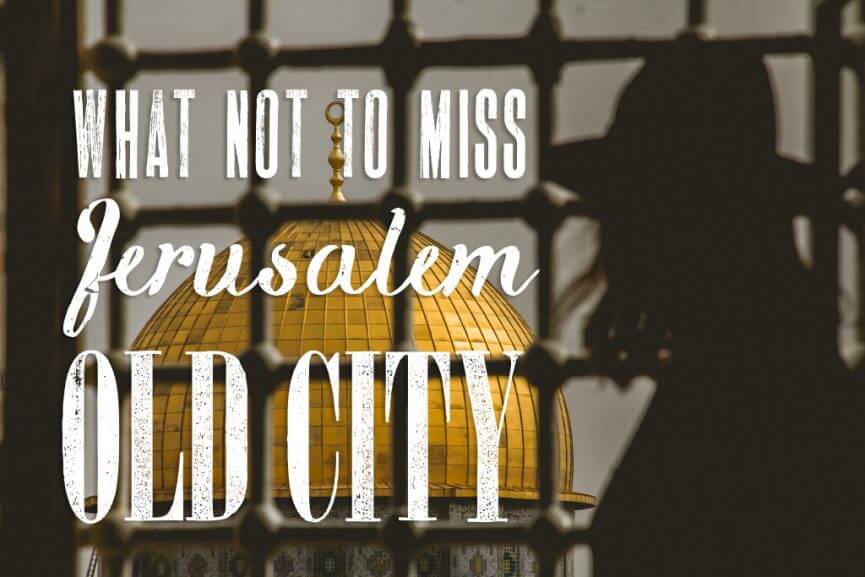 Of course one of the best things to do in Jerusalem is to, of course, visit Jerusalem Old City. It is one of the holiest and historical places on earth. It’s no wonder why this small area is one of the most visited places on the planet. Divided into four quarters: Jewish, Christian, Armenian, and Muslim, this unique holy city is where three of the world’s major religions can share the same space in peace. Christians, Jews, and Muslims all share this .9 square kilometers ancient city as their holy land.

Here are our picks for what you have to see when visiting Jerusalem Old City.

Dome of the Rock 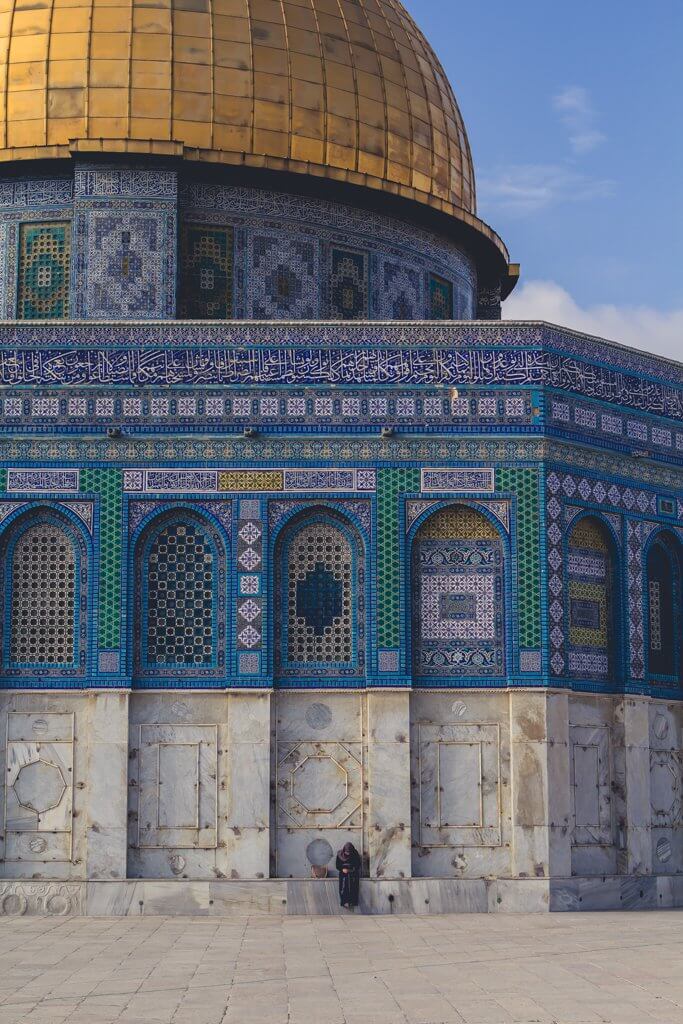 One of our favorite places in Jerusalem Old City would be the colorful and beautiful Dome of the Rock in the Muslim Quarter. You can’t miss the dazzling blue structure. Below is where Muslims believe the Prophet Muhammad descended into heaven and where Jews believe that Abraham offered his son to God.

Just next to the Dome of the Rock, aka Temple Mount, is the Al-Aqsa Mosque. It is one of the oldest mosques in the world. However, if you’re not Muslim you will not be able to enter.

You are also restricted to visit the Dome of the Rock during certain hours and days. These times change seasonally, so be sure to check with a local on when the best time to visit during your trip to Jerusalem’s Holy City. 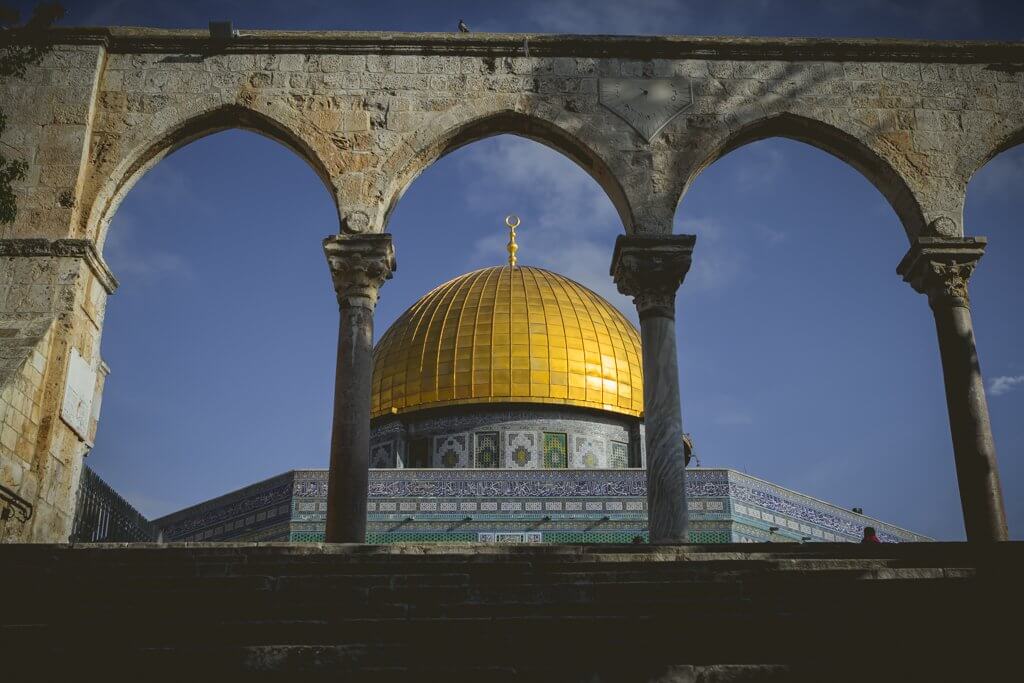 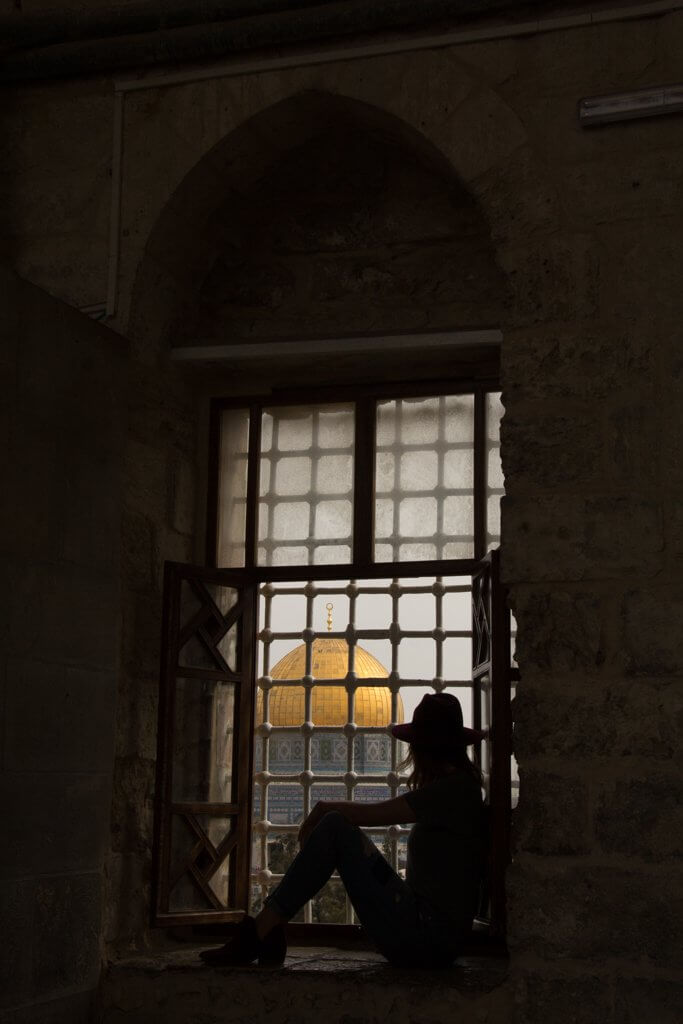 Tips for Dome of the Rock: 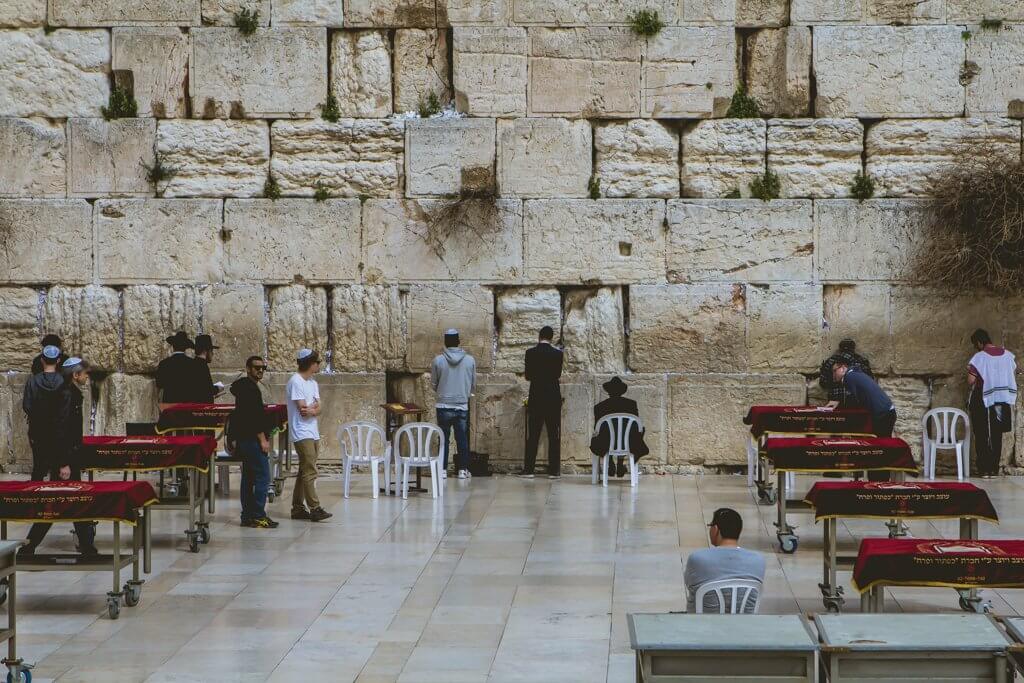 Located in the Jewish Quarter, the Wailing Wall is one of the most famous spots to visit in Jerusalem Old City. Also known as the Western Wall, this is one of the holiest sites in Jewish religion. Many Jews come here to pray, and it draws thousands upon thousands of visitors each year.

The Wailing Wall is on the western side of the Temple Mount, hence the name, and a section of King Herod’s Temple. Jews gather to pray and weep here because they believe they have yet to restore their relationship with God as they have rejected their Messiah, Jesus Christ.

Needless to say you can feel the weight at the Wailing Wall as you watch those pray and weep with high emotion. 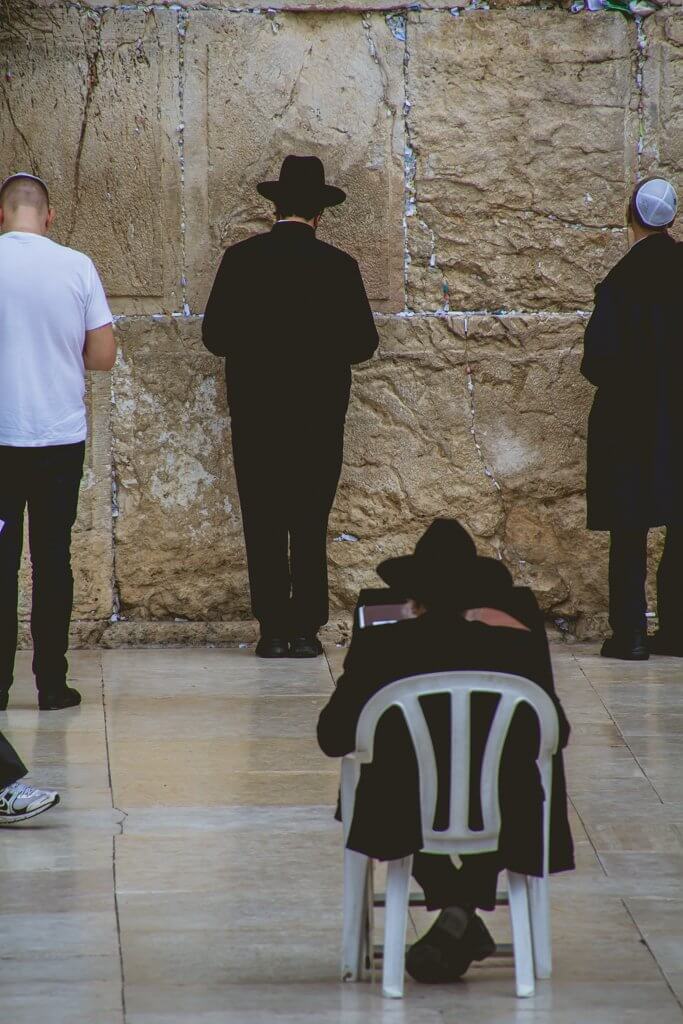 Tip: Men and women need to be sure to dress conservatively visiting the Western Wall. It is considered disrespectful to dress in revealing clothing. Many religious people will actually look away or cover their eyes if you approach in anything considered inappropriate.

Holy Church of the Seplechure 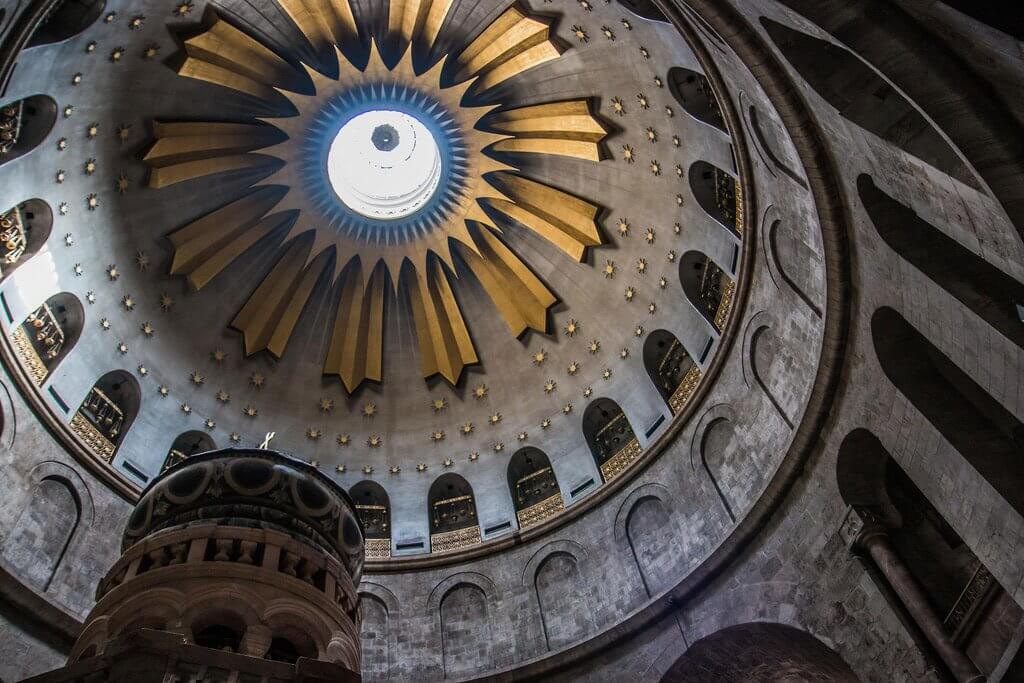 Photo by Gary Bembridge of Tips for Travellers

Located in the Christian Quarter, the Holy Church of the Sepulchre is the holiest site in Jerusalem Old City for Christians. The church was built where Jesus was crucified and later resurrected. The church itself is occupied by different denominations of Christianity that share this sacred site. 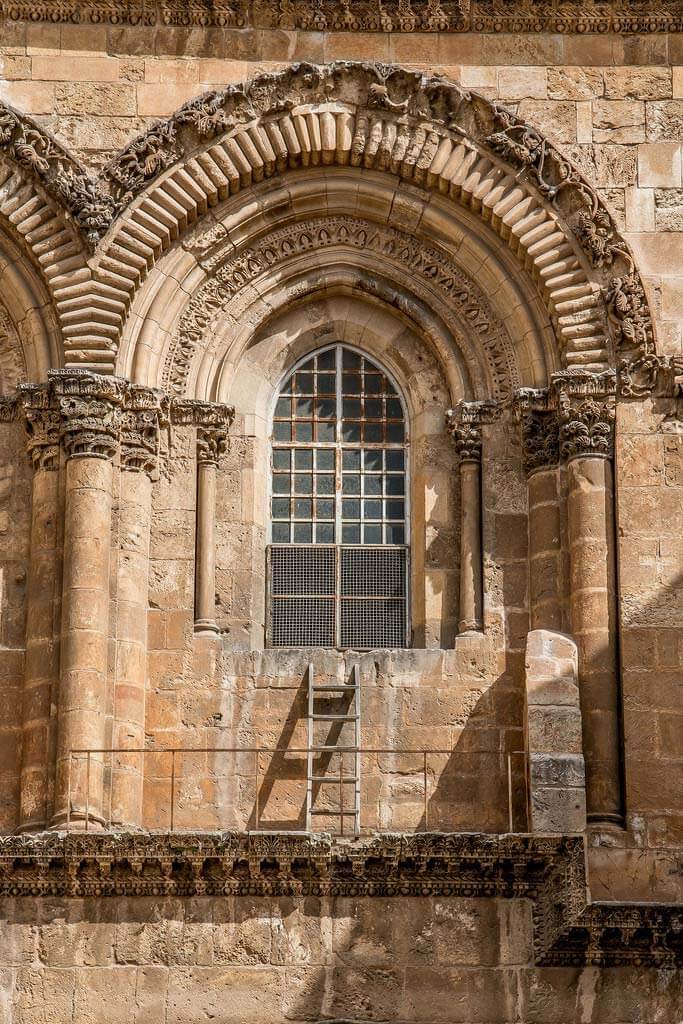 The famous ladder by Gary Bembridge of Tips for Travellers

One of our favorite stories about the Holy Church of the Sepulchre was told to us by Gary Arndt, of Everything Everywhere, about the immovable ladder at the church. Apparently, there was a 150-year-old debate over who should move a ladder sitting on a ledge outside the second story of the church and it never got resolved.

The care of the church is shared by 6 different denominations of Christianity including Roman Catholic, Greek Orthodox, Armenian Apostolic, Ethiopian, Coptic, and Syriac Orthodox churches. Some of the sections in the church are shared while others are strictly divided by different sects. Some areas are disputed over. It’s not uncommon for there to be arguments and quarrels within the different sects.

In the early 1800s, someone placed a ladder on the edge of the second floor of the church. Since there are territory battles, no one would step up and move the ladder. The story became a symbol of the centuries-old territorial feuds that go on within the different denominations of the same faith and remains to this day. 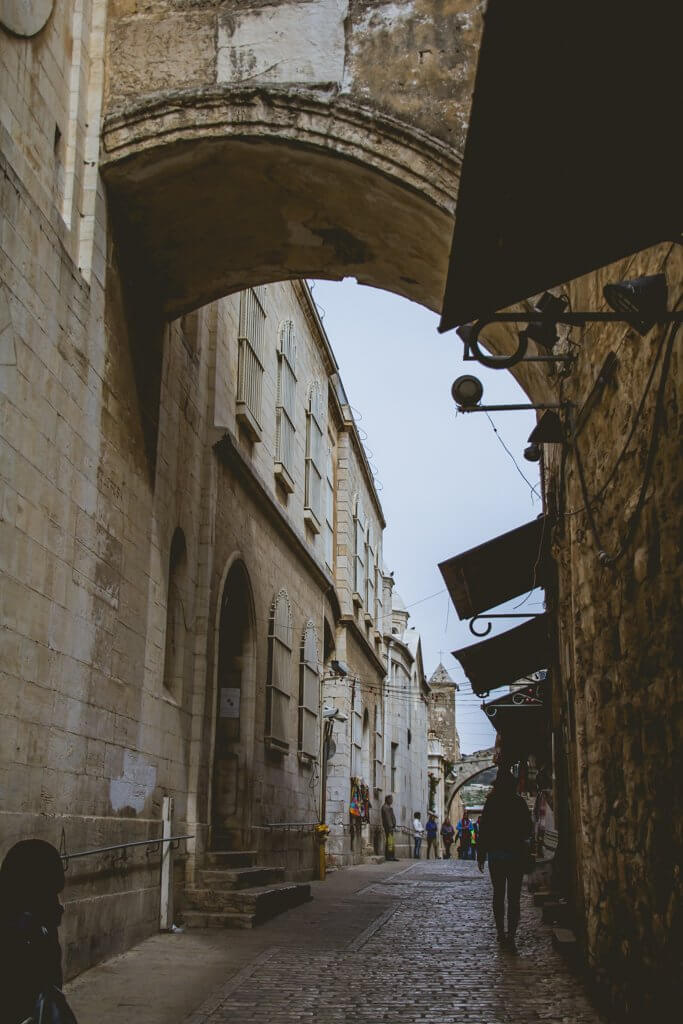 Via Dolorosa, aka the Way of Sorrow, is another one of the most visited spots in Jerusalem Old City. This walk follows the walk Jesus Christ took after his condemnation with the cross towards his crucifixion. The walk starts in the Muslim Quarter at the first station and follows a path of fourteen stations ending at the Holy Church of the Sepulchre where Jesus’s final stop was before passing.

The second station along the way, Chapel of the Flagellation is a noteworthy stop. This is where Jesus was said to be flogged.

You can do the walk any day by yourself. However, if you happen to be in Jerusalem Old City on a Friday you can join a procession led by monks. 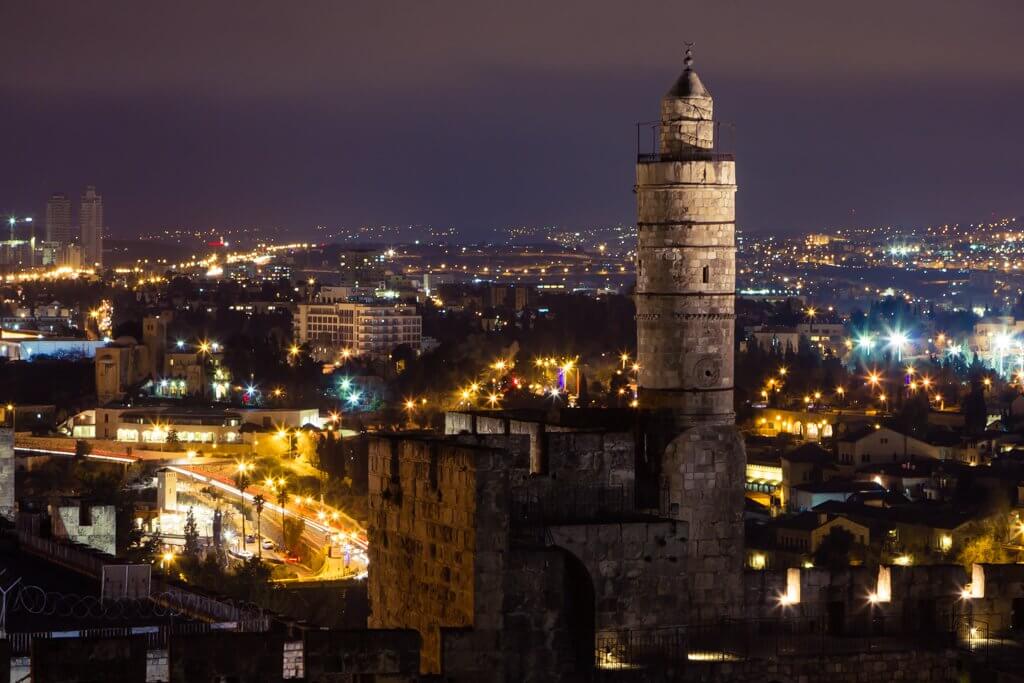 Another one of our favorite spots in Jerusalem Old City was the ancient citadel, the Tower of David. Not only does the tower offer incredible birds eye views of Old City but you can also see the new city built up around the walls. It’s the perfect juxtaposition of where old meets the new. 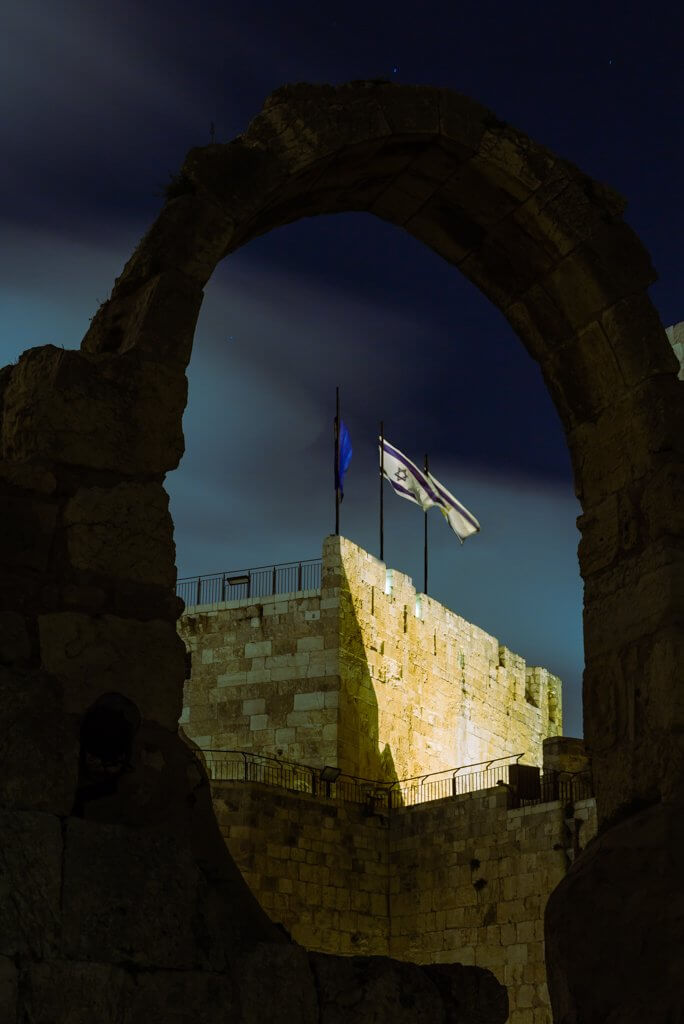 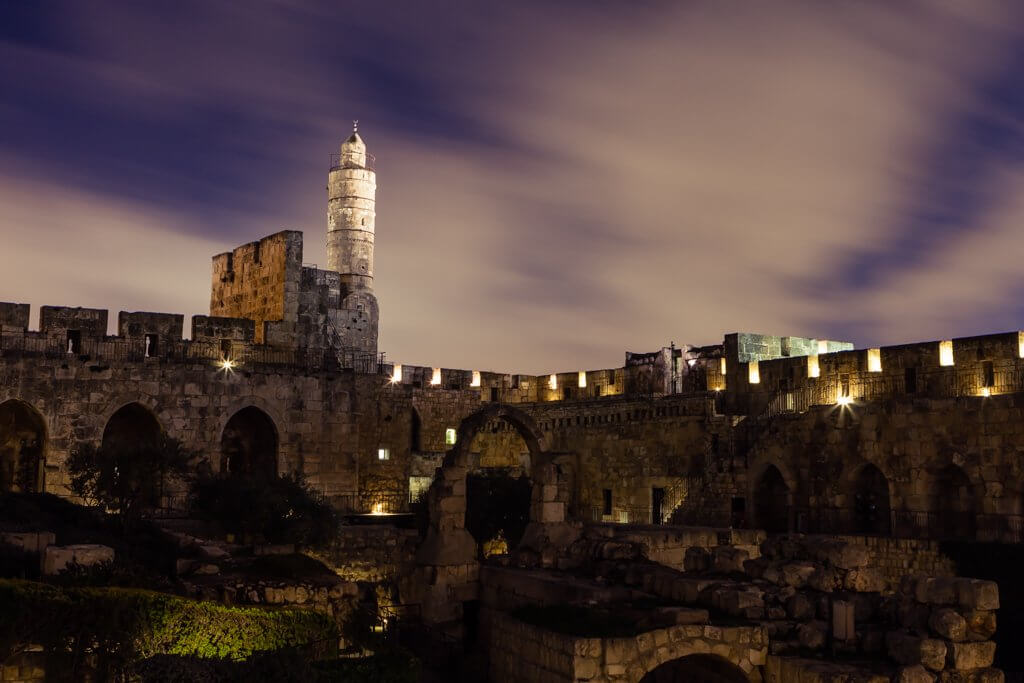 We recommend taking a guided tour through the ancient and famous citadel built by King Herod to protect the palace he built. Since being built the citadel has been conquered and rebuilt several times and you can visually see the different layers when visiting.

The Night Spectacular show illuminating the walls of the citadel

You can also learn the story of Jerusalem inside the museum. Be sure to come back at night and check out the Tower of David Night Spectacular. The open air night show is a magnificent light and sound show projected on the entire interior of the citadel. The 45-minute presentation is mesmerizing and a must see while in Old City Jerusalem.

The Different Gates and Ramparts 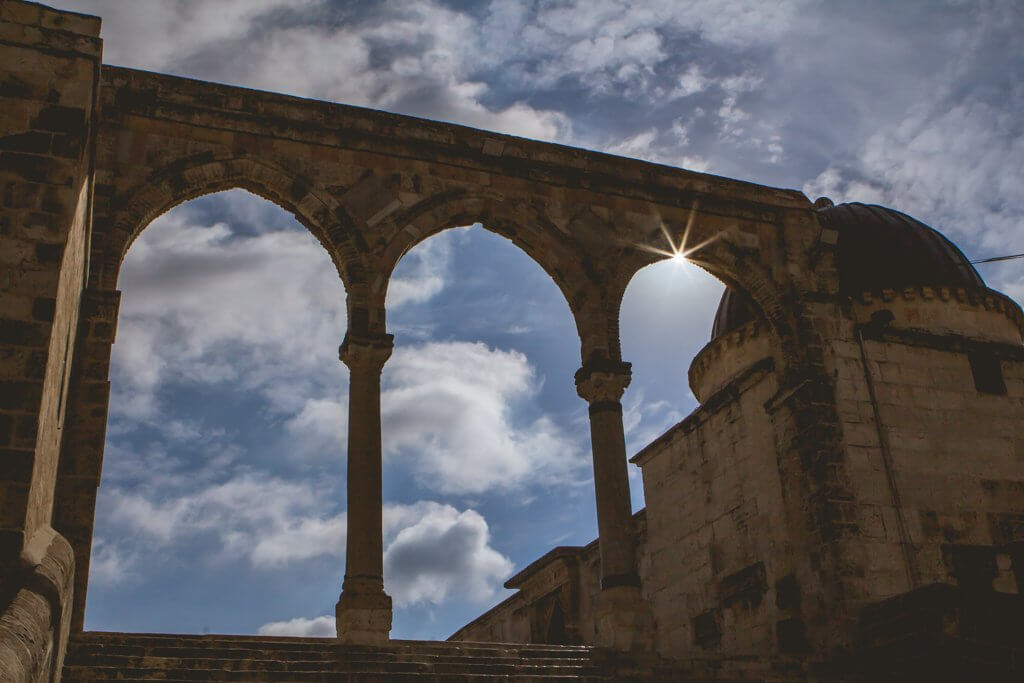 Jerusalem Old City is made up of nine different gates connecting the walls of the city. There are some you can visit including Jaffa Gate, Damascus Gate, Lion’s Gate, and Zion Gate. You can walk along the ramparts of the city walls. This will allow you to enjoy magnificent views of Jerusalem Old City as well as get from gate to gate.

Jaffa Gate is the main passageway to the Christian quarter and you can walk the ramparts to the north leading to Lion’s Gate or South leading to Dung gate. The Damascus Gate is also another popular gate among Jerusalem Old City and is in the Muslim Quarter. Lion’s Gate leads to the Mount of Olives outside the city’s wall, another popular stop for visitors. 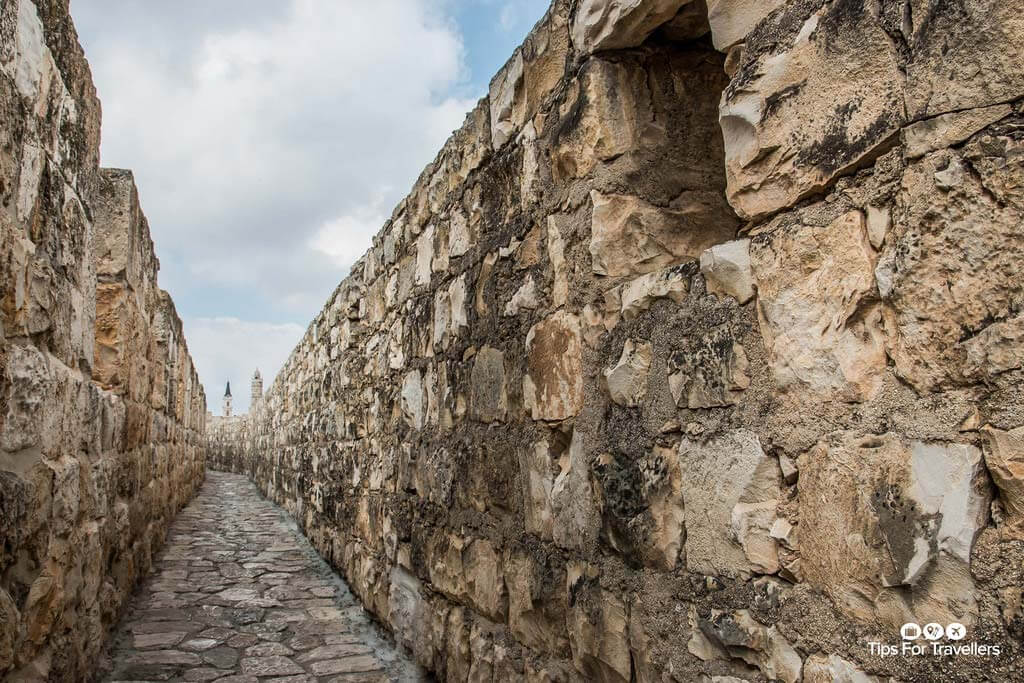 Old City Ramparts by Gary Bembridge of Tips for Travellers

To walk the ramparts there is a small fee of around 16 shekel for adults but is said to be a less crowded and more peaceful way to view Jerusalem Old City. 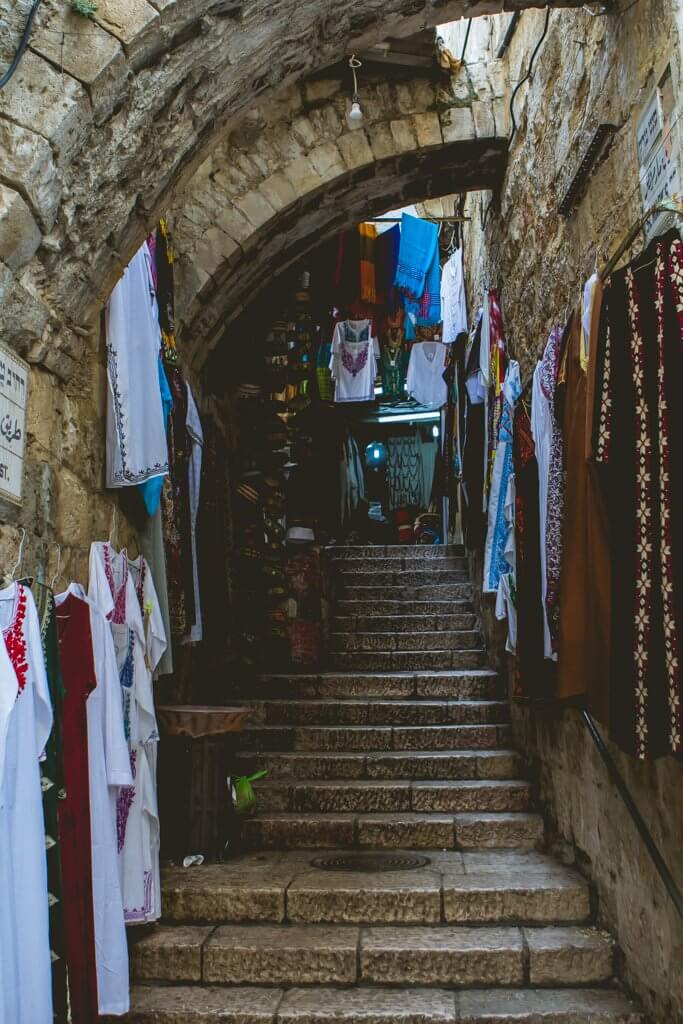 Weave your way through the markets within the walls of Jerusalem Old City. This is where different merchants sell anything from spices to textiles and trinkets. You’ll find anything and everything from silly novelty t-shirts, delicious snacks, to antiques. We found the markets to be fascinating and took a tour with a local guide to some of the different craftsmen throughout the interior of Jerusalem Old City. 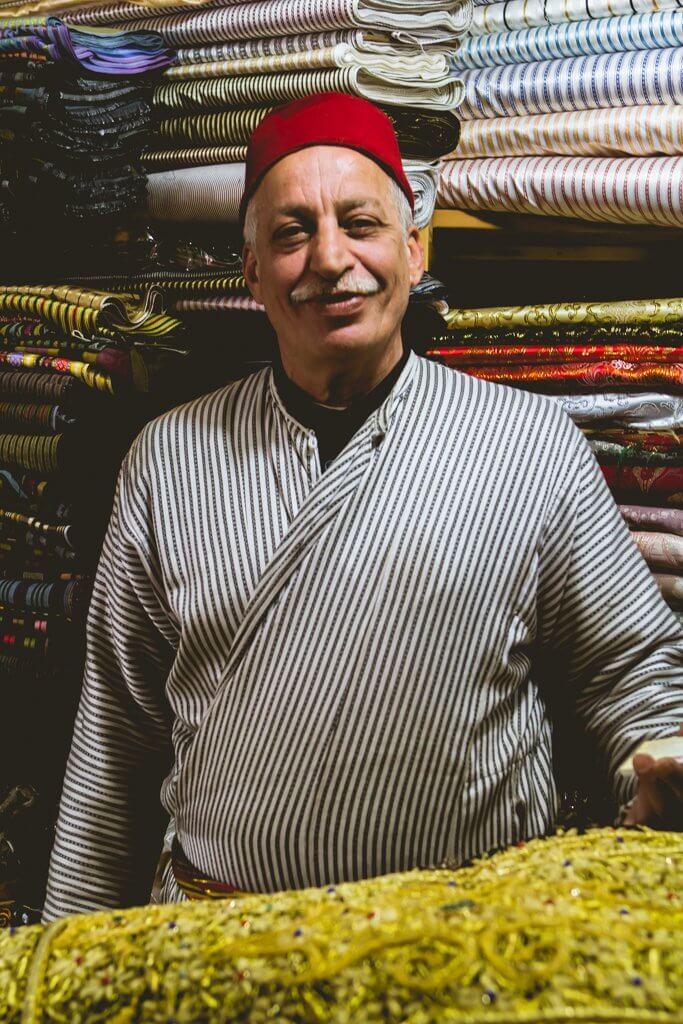 Our favorite stop would have to be the charismatic and photogenic textile merchant, Bilal Abu Khalaf, who is famous for having some of the rarest, intricate, and expensive fabrics in the world and clothing all three major religions inside the city walls, Jews, Christians, and Muslims. He’s even clothed Pope Benedict XVI. 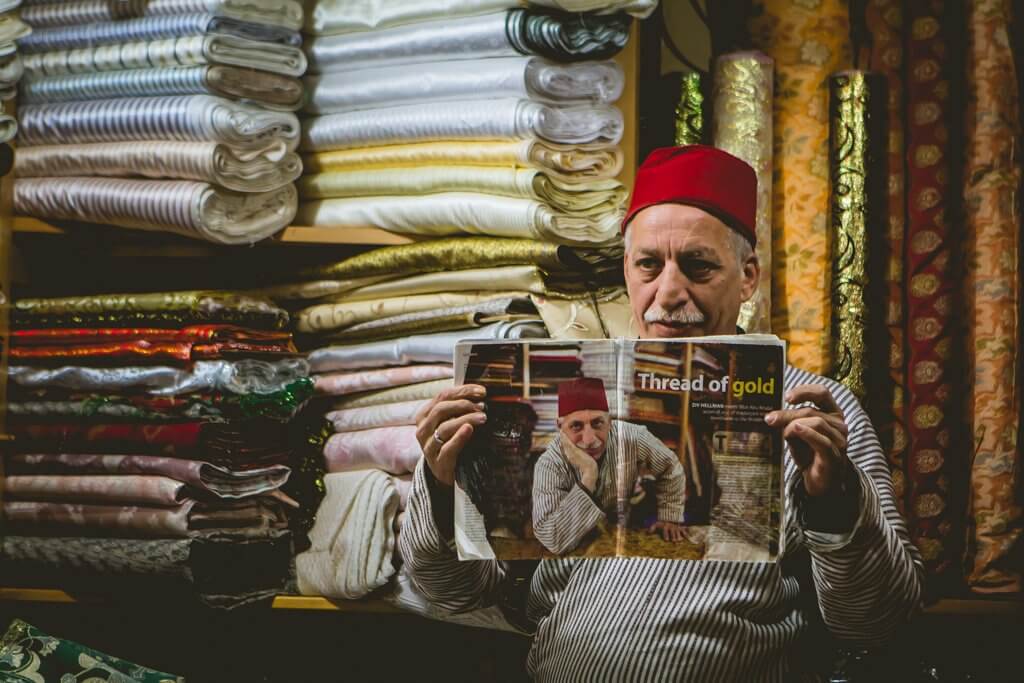 We never thought textiles could be so interesting. However, we could have listened to Khalaf talk about and show us his rare fabrics all day.

We recommend checking out Jerusalem Old City markets and the different merchants. You may be surprised at what you will discover.

Did you know some people experience “Jerusalem Syndrome,” after their visit? Don’t know what that is? Check out this post by Supernatural Travel who explains it well.

To check out more of the best things to do in Jerusalem Old City check out this post by Gary Bembridge at Tips for Travellers!

These were our picks for what you have to see in Jerusalem Old City. Did we miss anything? Let us know in the comments below. 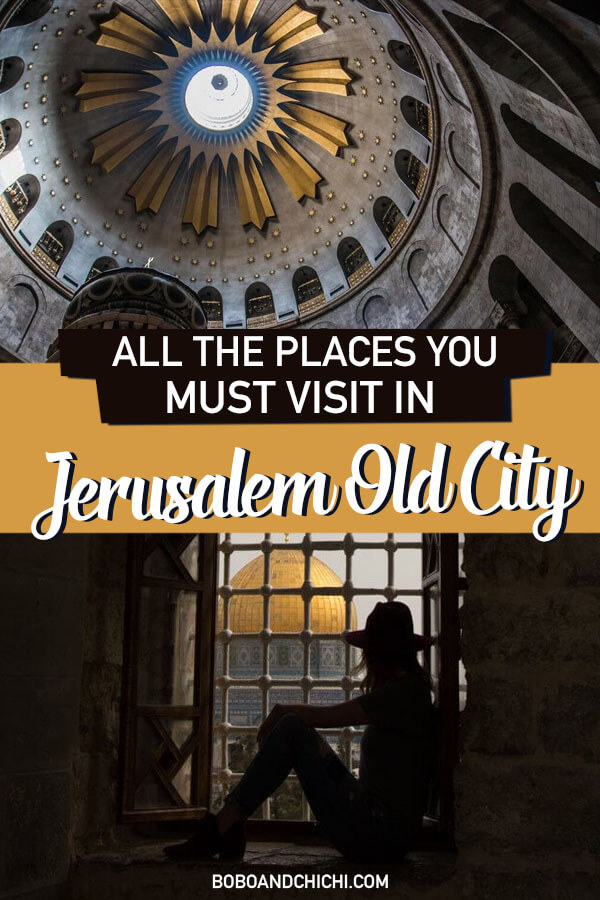