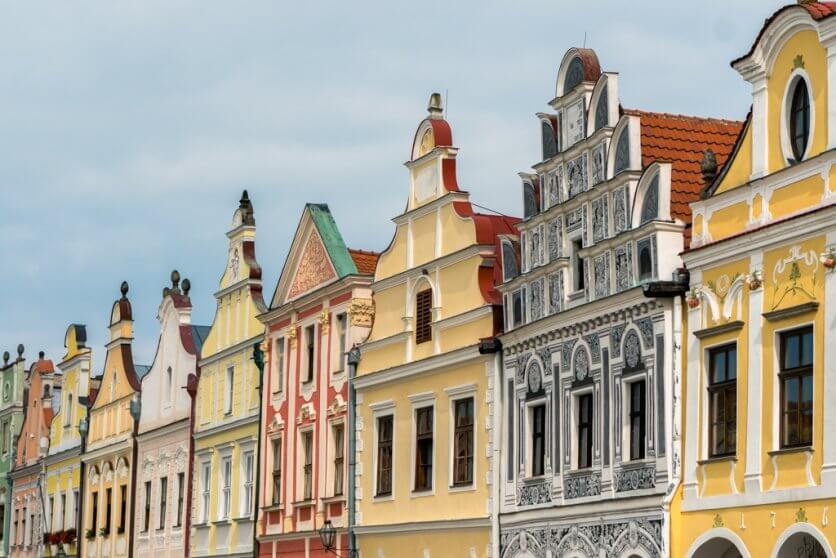 One beautiful area to explore in the Czech Republic is the rolling hills of the Czech Highlands, the region of Vysočina. During our travels through this beautiful country and gem of Central Europe, we had the opportunity to visit all three of the UNESCO World Heritage sites of Vysočina.

Through the rolling landscape of the region, you can visit these historic sites that are a reminder that this area is steeped with history and monumental sites preserved in time.

Vysočina is home to 25% or 3 of the 12 Czech Republic UNESCO Sites, for the purposes of this post, we want to highlight the intriguing Vysočina UNESCO sites that we had the privilege to explore as well as some of the highlights of these preserved moments in history through the lens of our camera.

Vysočina is shared between two historical regions including Bohemia and Moravia. Part of Vysočina is in the Southeastern part of Bohemia and the other part is in the Southwest part of Moravia with its capital being Jihlava and is home to two mountain ranges; Žďárské vrchy and Jihlavské vrchy of the Bohemian-Moravian Highlands.

The region of Vysočina is surrounded by other famous Czech cities including Kutná Hora to the Northwest, Jindřichův Hradec to the west, and Brno to the east.

The heart or center of Vysočina is about 126 kilometers from Prague or a 1.5 hour drive.

Disclaimer: This post was in collaboration with Czech Tourism, as always all opinions and experiences are our own. We did spend a considerable amount of time here on multiple trips at months at a time, so we are excited to have partnered with the official tourism board to give you this guide!

Pilgrimage Church of St. John of Nepomuk at Zelená Hora 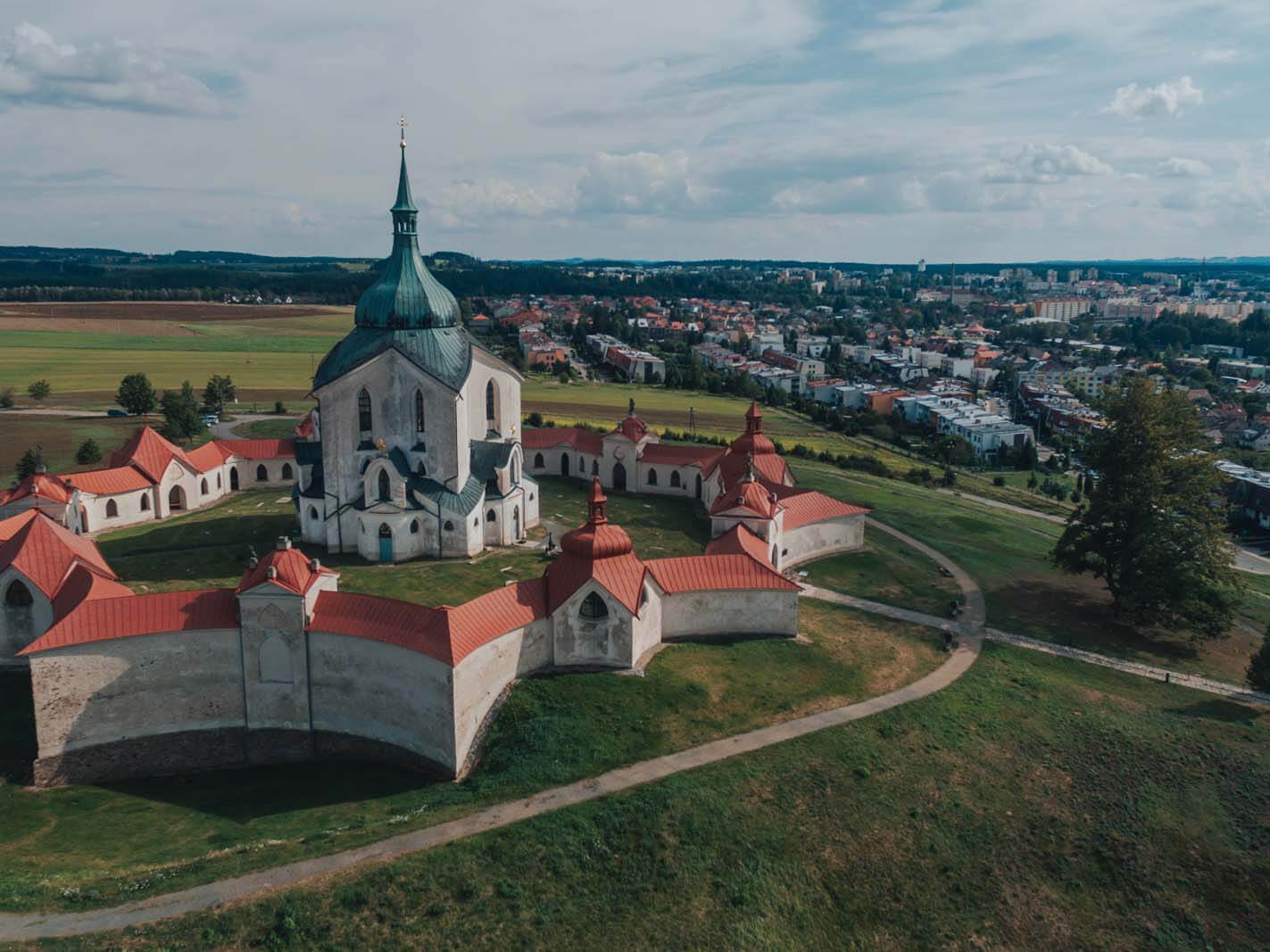 One of the most visually stunning Vysočina UNESCO Sites is The Pilgrimage Church of St. John of Nepomuk at Zelená Hora. The star-shaped complex and design are between Neo-Gothic and Baroque styles of architecture by architect Jan Balžej Santini Aichel, more commonly known as just Santini who was a Czech architect of Italian descent known for creating in the combination of Baroque and Gothic architecture styles.

His other work throughout the Czech Republic also includes UNESCO sites in Kutná Hora, The Church of the Assumption of Our Lady and Saint John the Baptist. 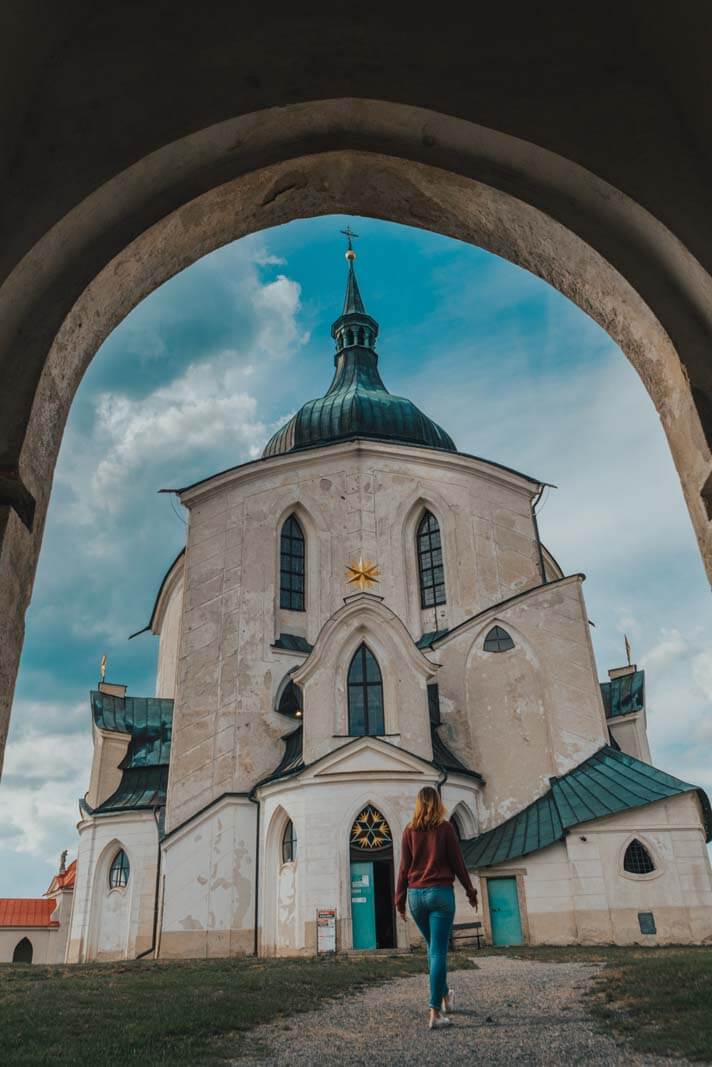 This Vysočina UNESCO site though is a pilgrimage church that was built to honor St. John of Nepomuk in the early 18th-century. The star shape of the entire structure has 5 points to reference the 5 stars in the halo of St. John of Nepomuk, who was martyred in 1393 in the Vltava River by Wenceslaus.

It is said that Nepomuk was the confessor of Wenceslaus’ wife which led to jealousy and caused his murder. There’s an entire story and legend behind this that lead to the construction of this site. Learn more about the history and story behind St John of Nepomuk, the martyr saint of the Czech Republic and Central and Western Europe. 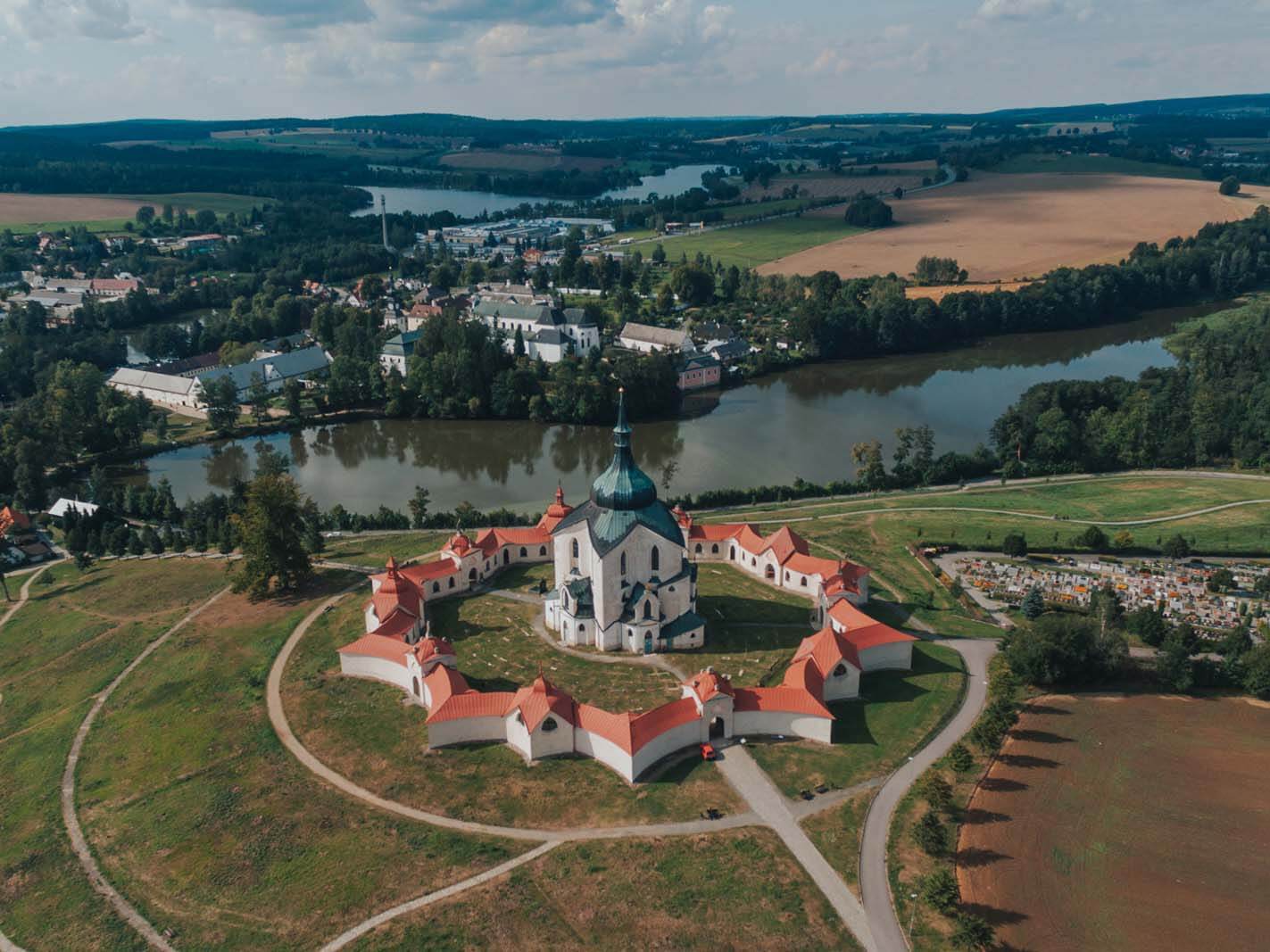 When visiting, you can walk the grounds and around this stunning complex. However, from a birds-eye view and vantage point you really can admire the star shape structure’s intricate and beautiful design!

The five stars on St. John of Nepomuk’s halo represent the stars in the sky the night of his death. He is now considered the protector from floods and drowning and is often seen as statues on bridges including the Charles Bridge in Prague. Once you’re familiar with him, you’ll start to see him everywhere around the Czech Republic! 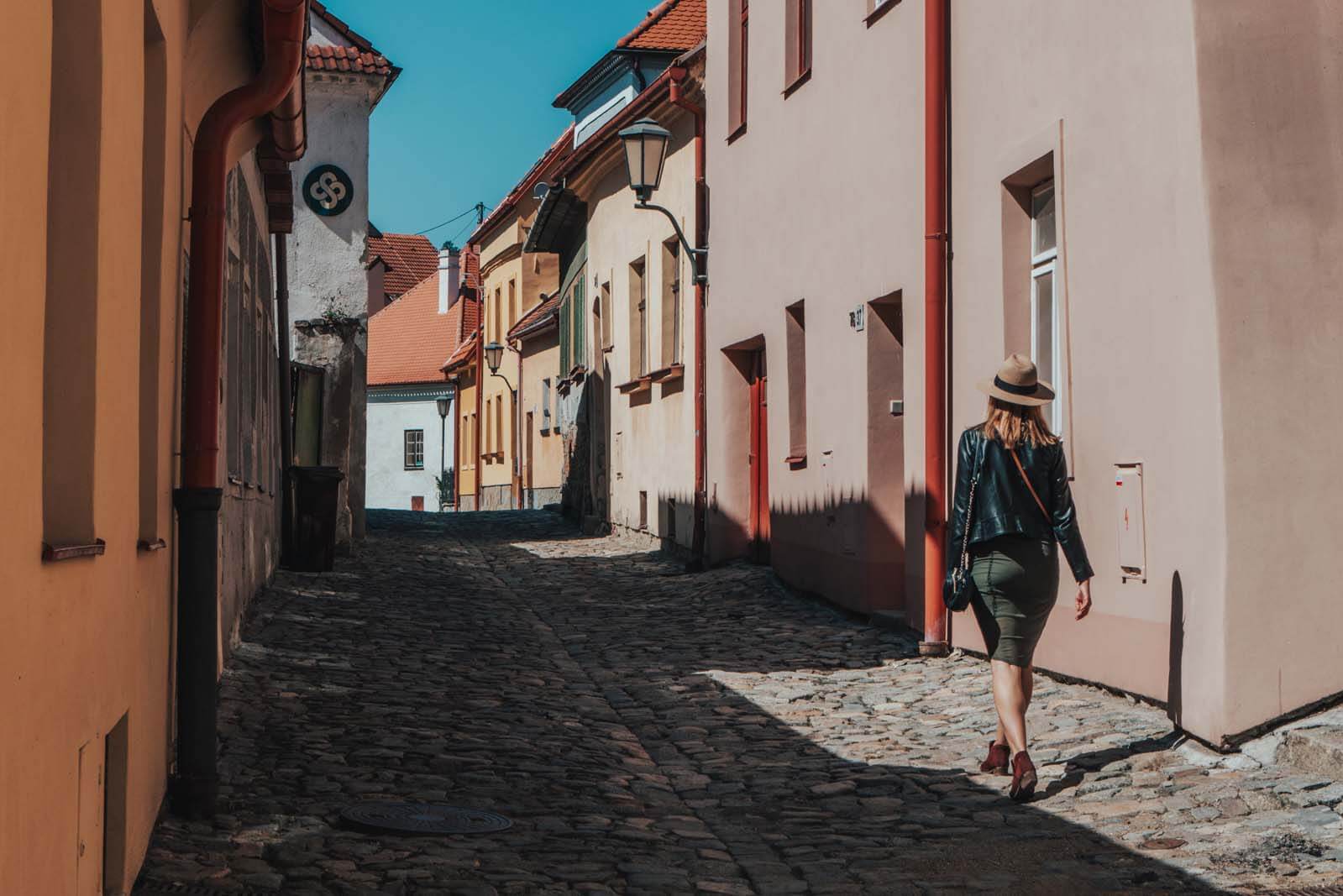 During our extensive travels throughout the Czech Republic over the years, we really love exploring the beautiful towns and regions. Another one that did not disappoint was Třebíč located in the Moravian part of the Vysočina Region. Besides being aesthetically pleasing to the eye with its colorful buildings, stunning cathedrals, and cobbled lanes, this is home to another UNESCO site and cultural history tied to the Jewish community. 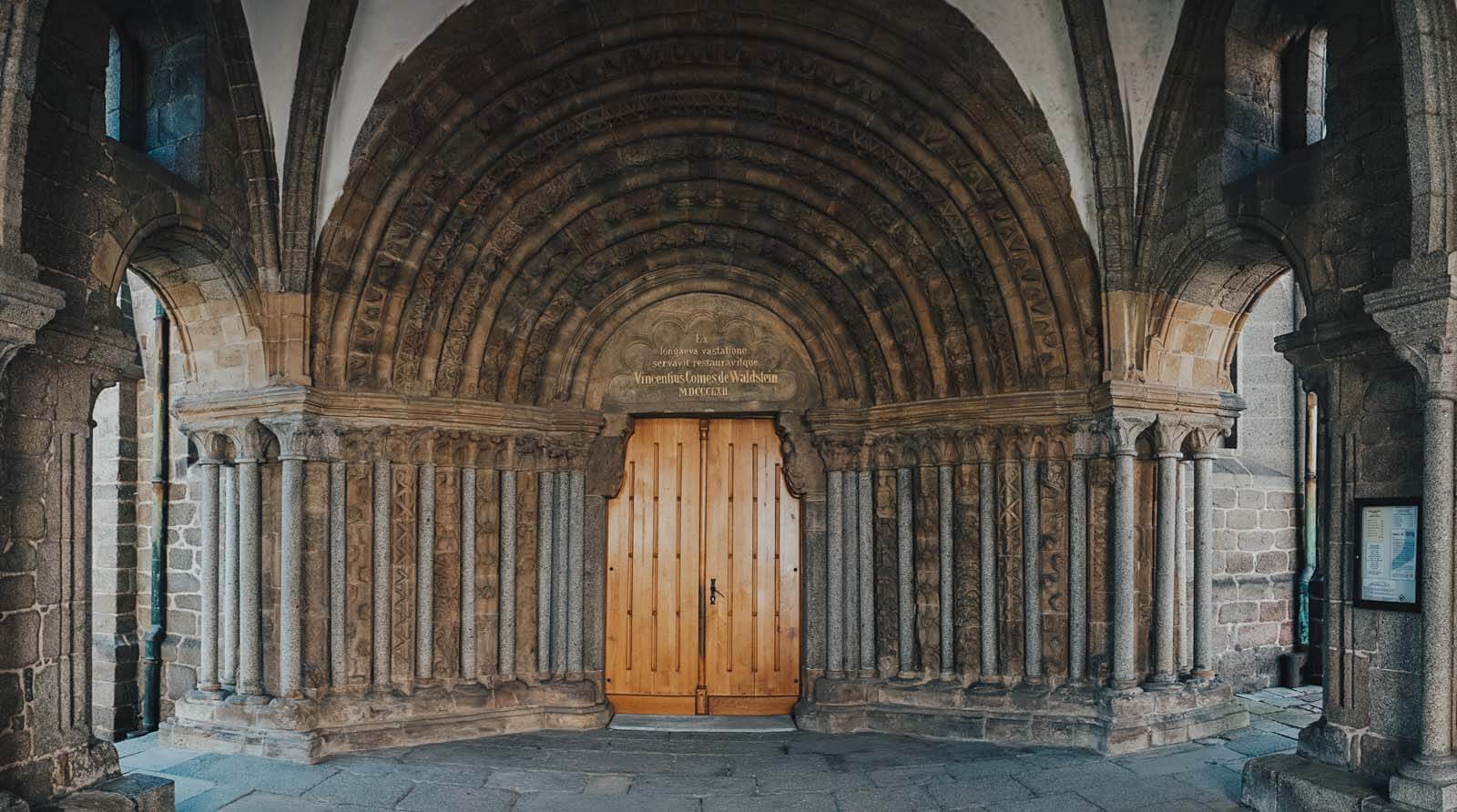 Třebíč is most famously known for its Jewish Quarter and St Procopius’ Basilica, which are the Vysočina UNESCO site represented here. We were shown the area with a local guide and learned about one of the best-preserved Jewish ghettos in Europe which earned it its UNESCO status.

The Jewish Quarter of Třebíč is compromised of 123 houses, 2 synagogues, and a cemetery dedicated to the Jewish inhabitants. In 1890, there was a population of around 1,500 Jewish people here in Třebíč, but during the 1930s only 300 of the population were of the Jewish faith.

By World War II, everyone in the Jewish community of Třebíč were deported and heinously murdered in Nazi concentration camps. There were only 10 survivors that made their way back to Třebíč after the war and fall of the Nazi regime.

Like many Jewish sites in Europe, this one has a very dark and sad history and we believe it is important to not only learn this history but explore and visit these sites to learn. 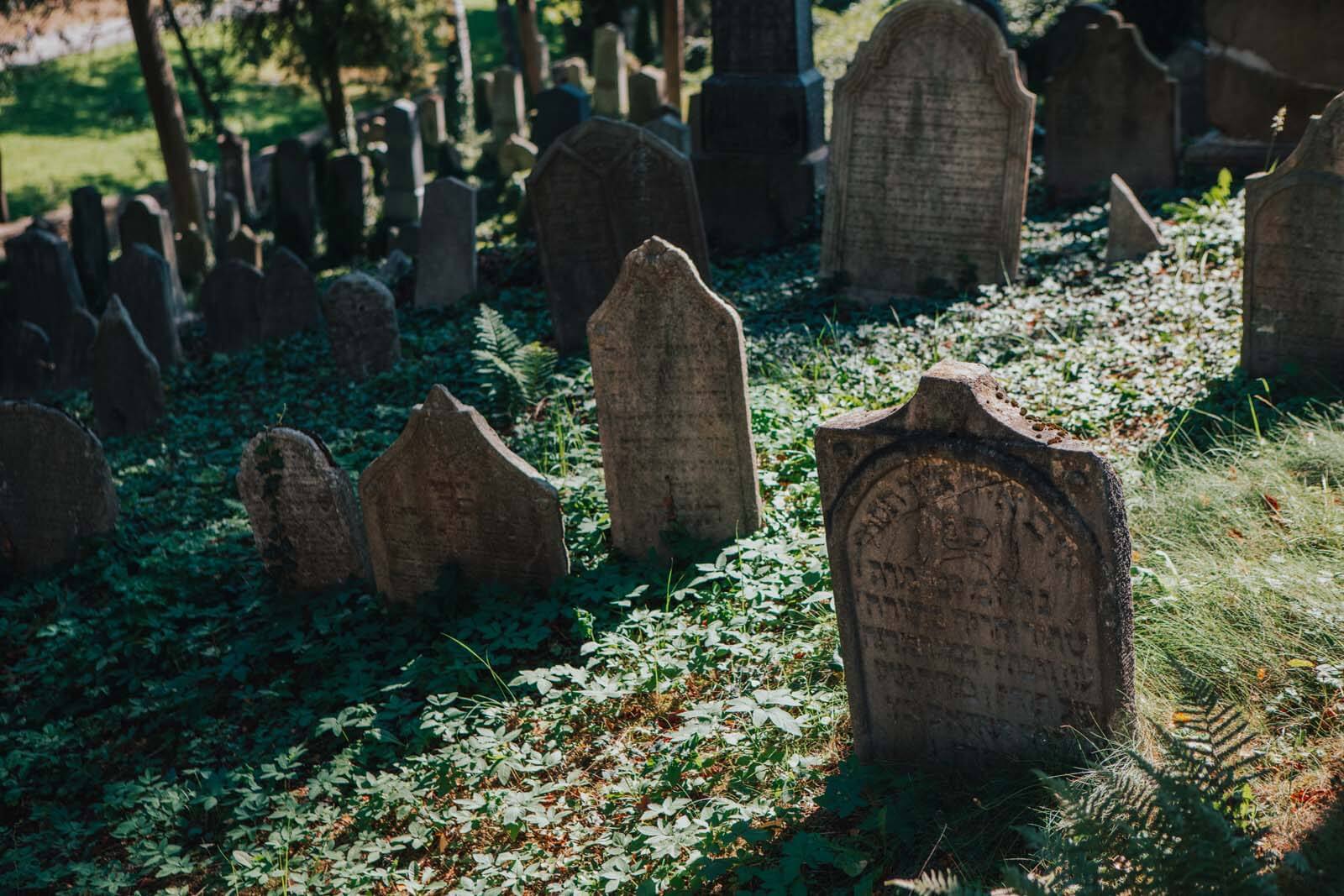 The UNESCO site here includes The Romanesque and Gothic Basilica of St. Procopius, which is home to the second oldest fresco paintings in Moravia. The best-preserved area is the crypt that was once the burial place of the monks that ran the monastery as well as the Jewish Quarter which is a great display of what life and community was like for this population.

Both of these sites are also historic reminders of the co-existence between both Christianity and Judaism as religions between the Middle Ages through the 20th-century.

The Jewish Quarter of Třebíč is the first independent Jewish monument to be honored outside of Israel. 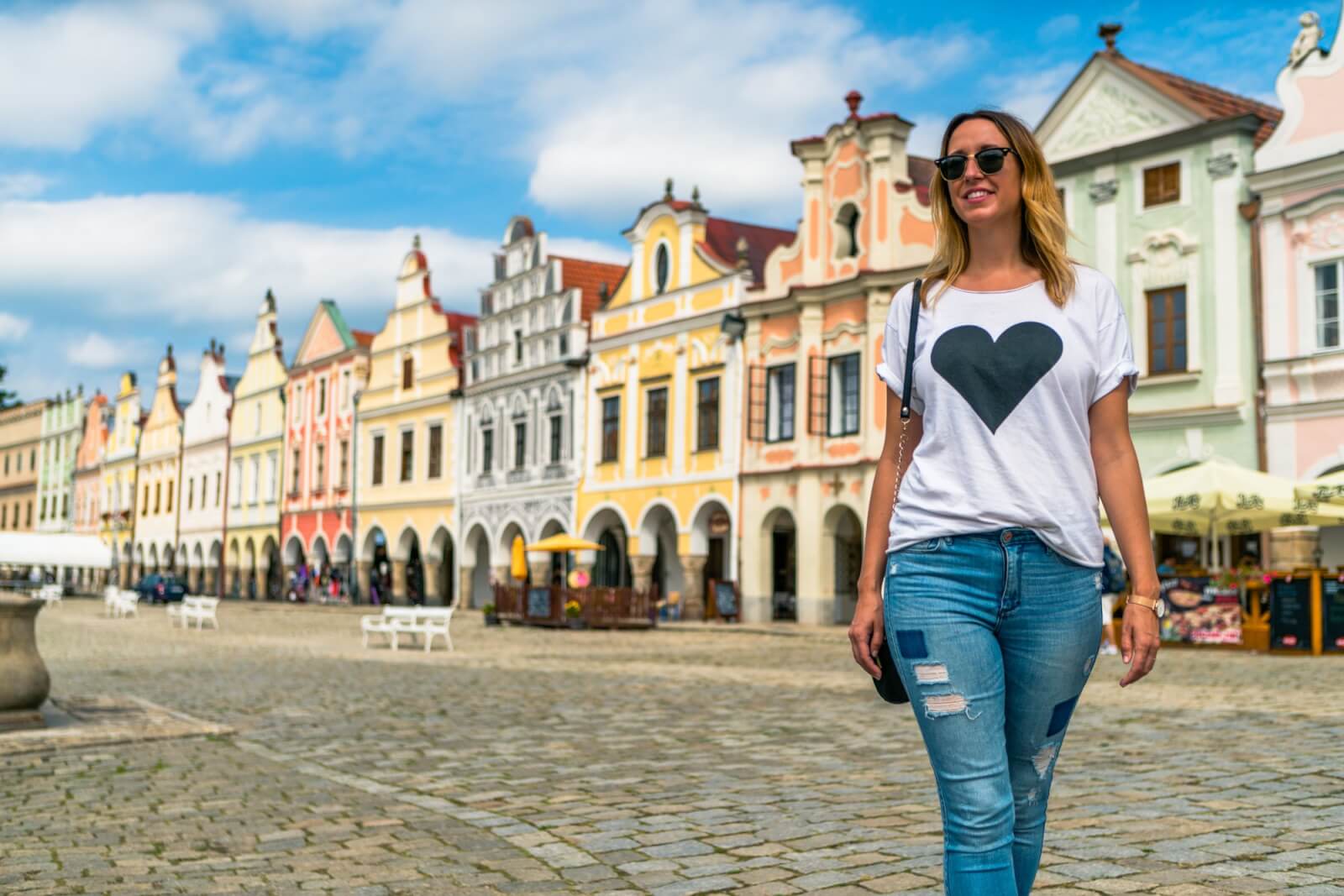 Easily one of our favorite, colorful towns with one of the most gorgeous town centers we’ve visited in Europe is our next Vysočina UNESCO site, the historic center of Telč.

The colorful row of historic homes that make up the beautiful historic city center are wonderfully preserved Renaissance and Baroque homes. What you see today was built after a devastating fire in the 14th century when all the wooden homes burned to the ground. Some say this was when Telč was ‘reborn.’ 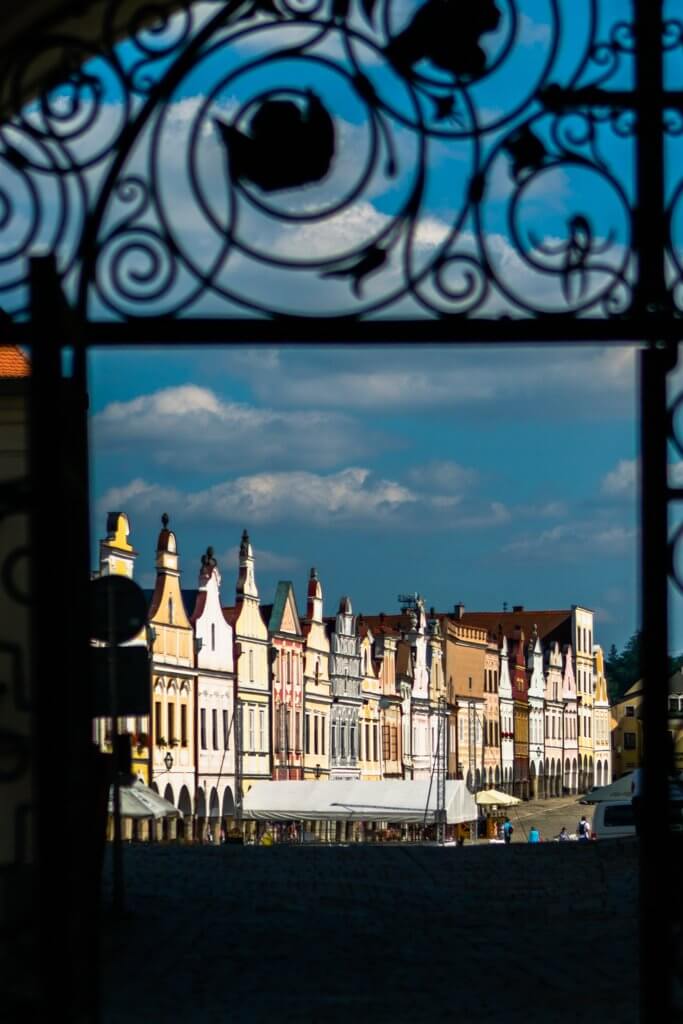 Zacharias of Hradec, who was the ruler of this time was the one who decided to change the castle from Gothic to Renaissance and the townspeople soon followed and the homes were also then constructed of stone and then a network of manmade ponds were built to help against any future fires.

Highlights include the row of gorgeous homes in the city center and the chateau. What we found really intersting was that another reason why this town is so attractive is that when the townspeople were making their homes Baroque, they tried one upping eachother by flaunting their wealth with their decor and design of intricate details! 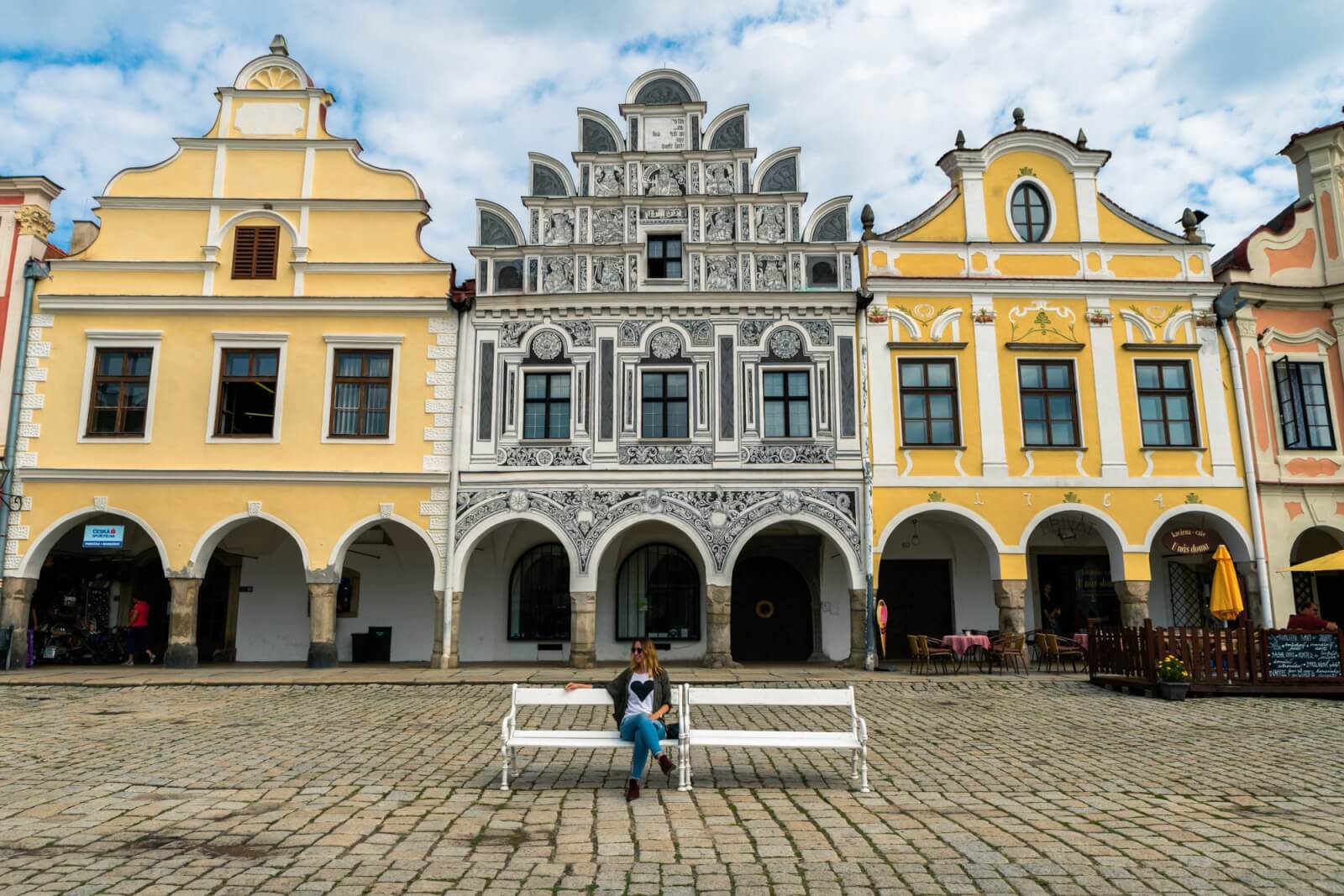 If you look closely you can actually find traces of hints on the details of the home of who actually lived there. For example, the black and white Venetian painted home has an almost vanishing pretzel on one of the home’s pillars on the square. This represents that a baker used to live in the home. Back then bakers were wealthy and therefore was able to have an extravagant Venetian inspired painted front façade of the house.

Because this was a crucial trading route between Vienna and Prague, Telč became very wealthy and was also a prosperous place for farming and fish breeding in the lakes built around town to thwart fires from ravaging the city once again.

Another interesting feature to Telč is that there are also a maze of underground tunnels that interconnect the entire town below the streets used for food storage and a way to escape town if there was another huge fire or invaders. 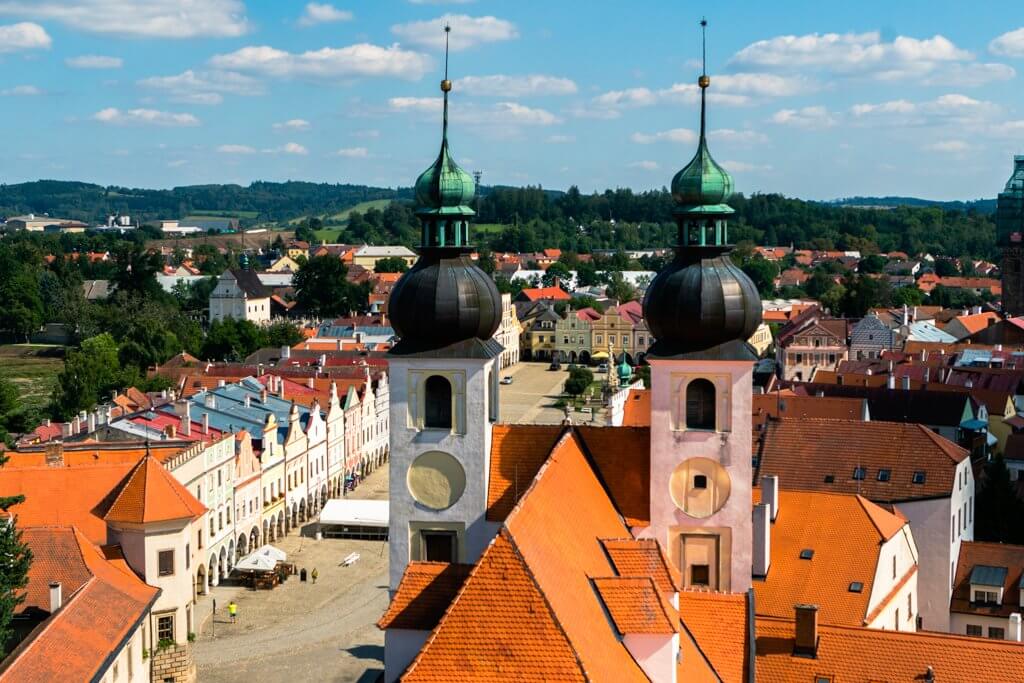 view from the watchtower

This is a really fabulous place to stay overnight to do some historic sightseeing as well as just take a beautiful walk around the castle grounds and be sure to climb the watchtower for a bird’s eye view of this charming place!

Also, don’t miss the scenic walk on the outer perimeter of town along  Stare Mesto pond to the Church of the Mother of God. Follow the path lined with statues of saints, including Saint John of Nepomuk with his halo of stars mentioned earlier!

Read more about this destination in our guide to Telč, Czech Republic

If you’re planning a trip to the Czech Republic consider using our collection of guides covering the country from our extensive time spent getting to know the country! Here are some helpful resources for you to plan your trip! 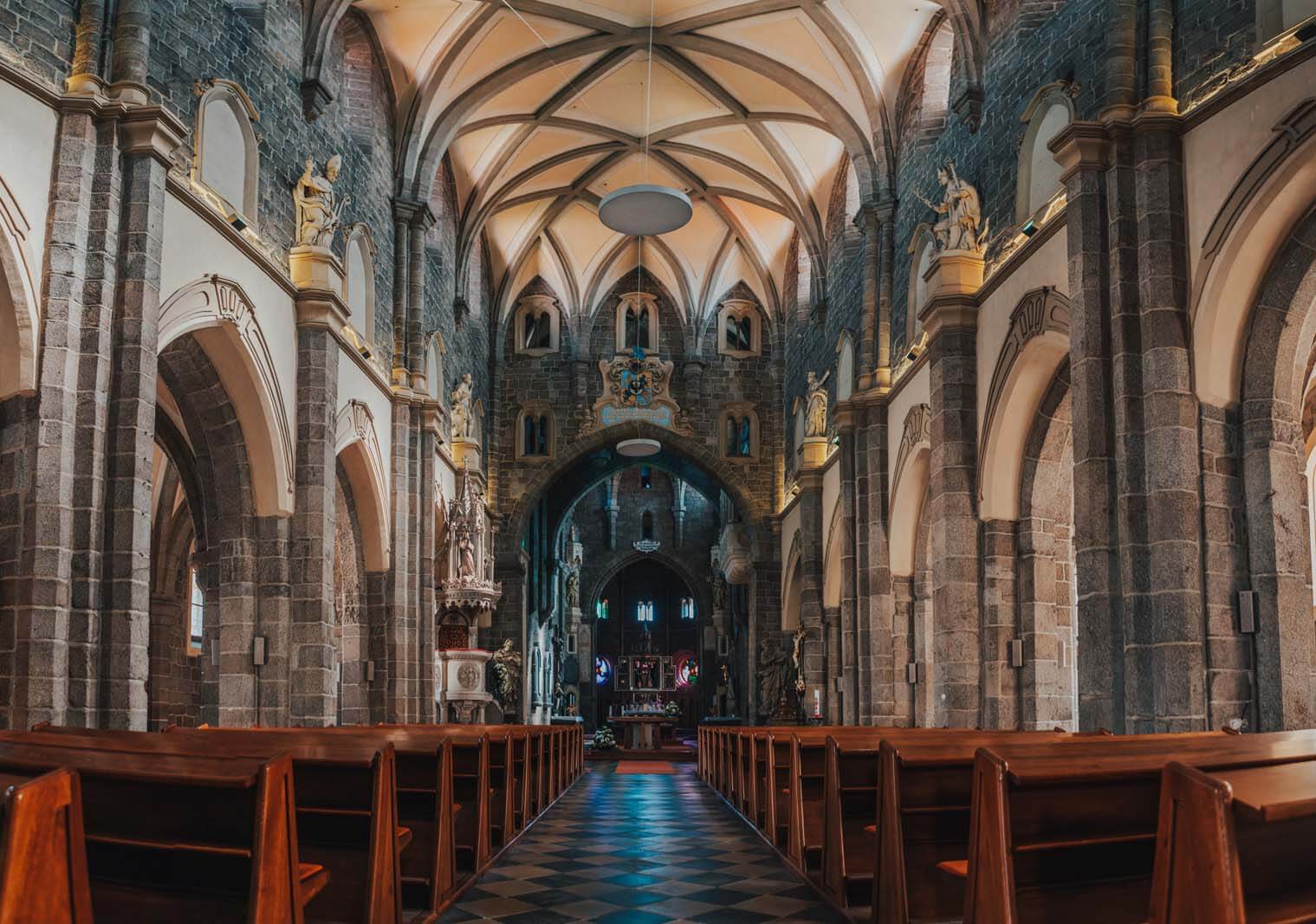