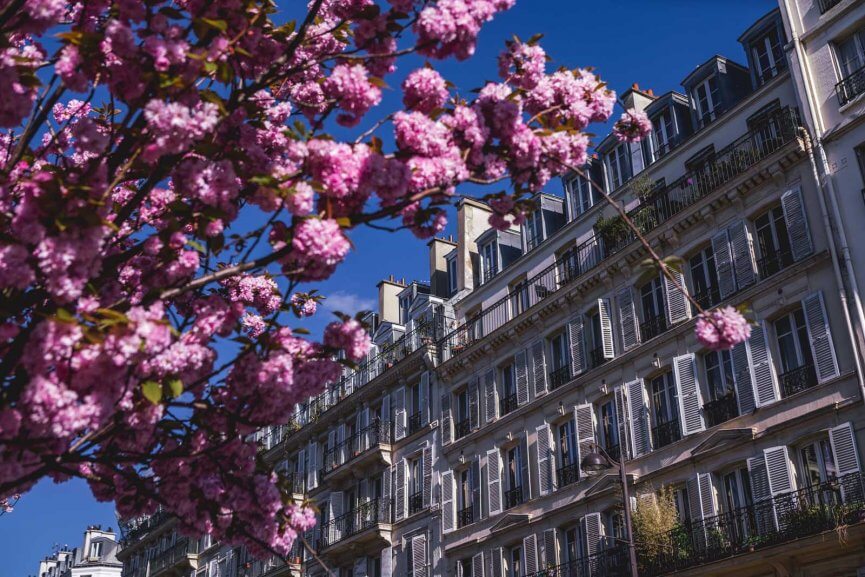 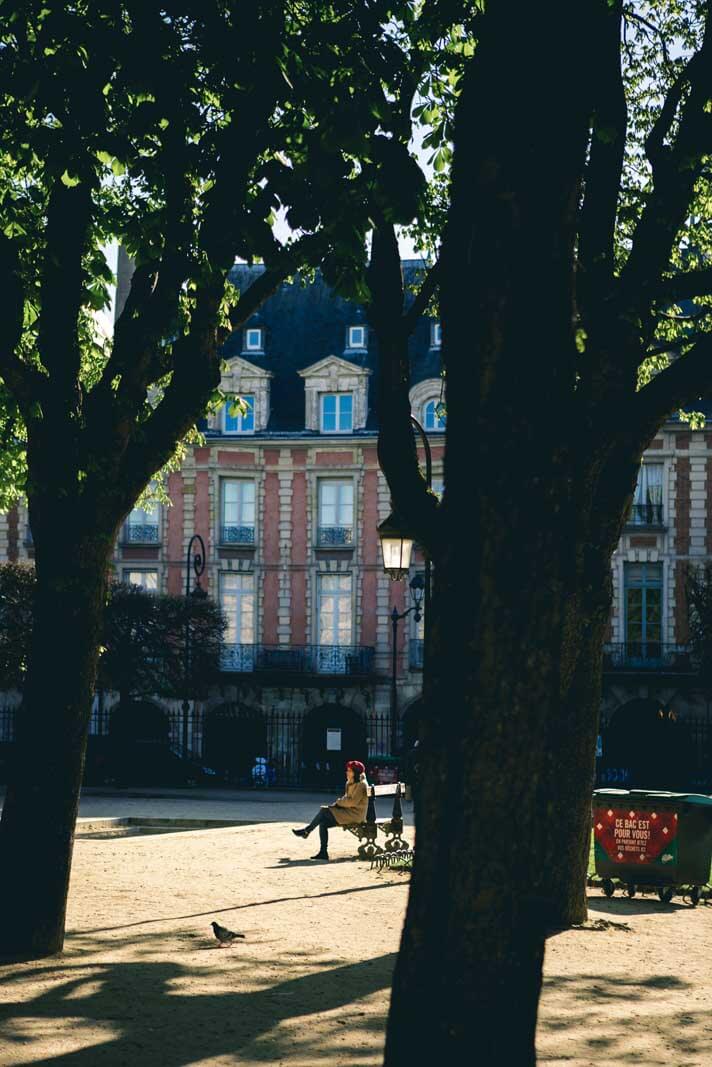 Le Marais, which literally translates to the swamp or the marsh in French, is a gorgeous historic district in Paris in the 3rd and 4th arrondissements worth exploring by foot.

This is considered the aristocratic district of Paris until the late 18th century and has incredibly gorgeous architecture and buildings as well as great shopping, a fantastic dining scene, and the city’s core Jewish community, the Chinese community, and LGBTQ community.

Unlike the rest of Paris which was reconstructed in the 1800s under Haussmann’s reconstruction of Paris commissioned by Napoleon III, Le Marais remained the same which gives it a unique vibe that you don’t see in the rest of the city and makes the architecture here important to the city and its history.

This area is also famous for its incredible art scene because of the galleries and museums here.

Things to do in Le Marais Paris 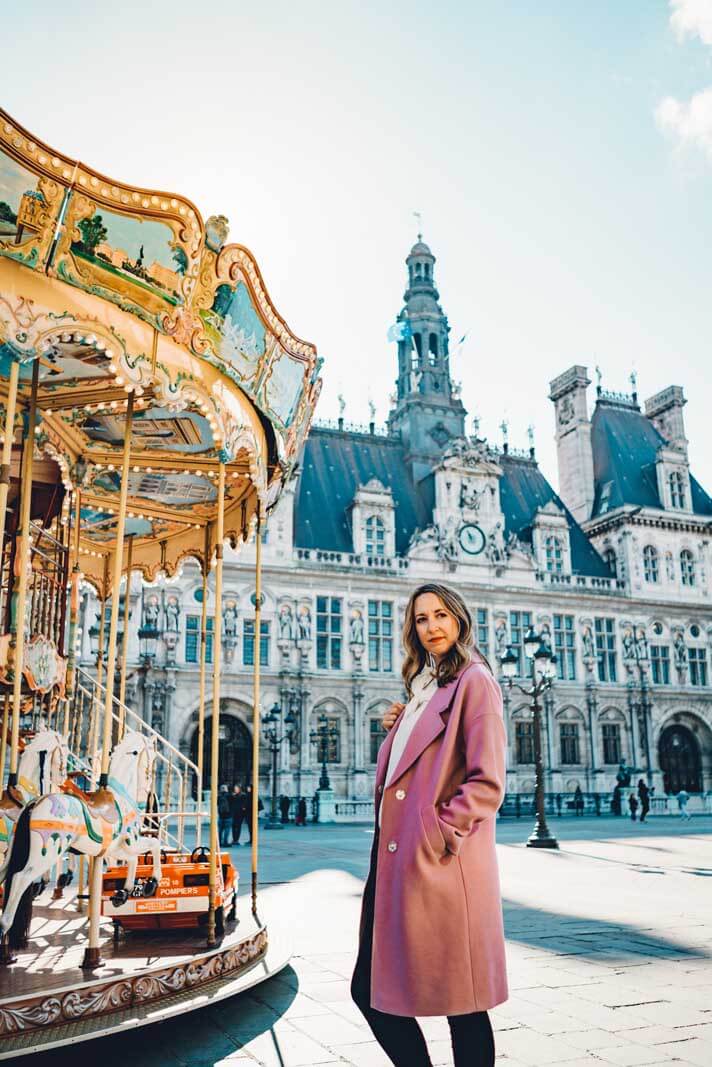 One of the most famous buildings in the entire city and one of the best things to do in Le Marais, Paris is the iconic Hotel de Ville. This building is not a hotel as we know it but so much more steeped with the history of the city. Be sure to pay close attention to the intricate details in the facade of the hotel from the statues to the clock tower. The inside is just as impressive as the exterior if not more with exquisite decor floor to ceiling from chandeliers to painted ceilings including a replica of the Hall of Mirrors from Versailles.

There are also regular exhibitions going on inside throughout the year, be sure to check what is going to be featured during your visit typically featuring local French artists and international exhibits.

This Paris landmark is also the Paris City Hall which has been in this location since the year 1357. The construction of Hotel de Ville though started in the 16th century under King Francois I.

This location was also where public executions took place from the 14th century to the last execution in the year 1830.

In 1871, Hotel de Ville was destroyed during the Paris Commune when it was set a blaze. It took 20 years to rebuild on the original foundation that survived the fire in neo-Renaissance style.

Today, Hotel de Ville is still the office for the local government and a gathering place for tourists and activities. You can’t miss the gorgeous carousel outside Hotel de Ville which is a picture perfect spot to stop. 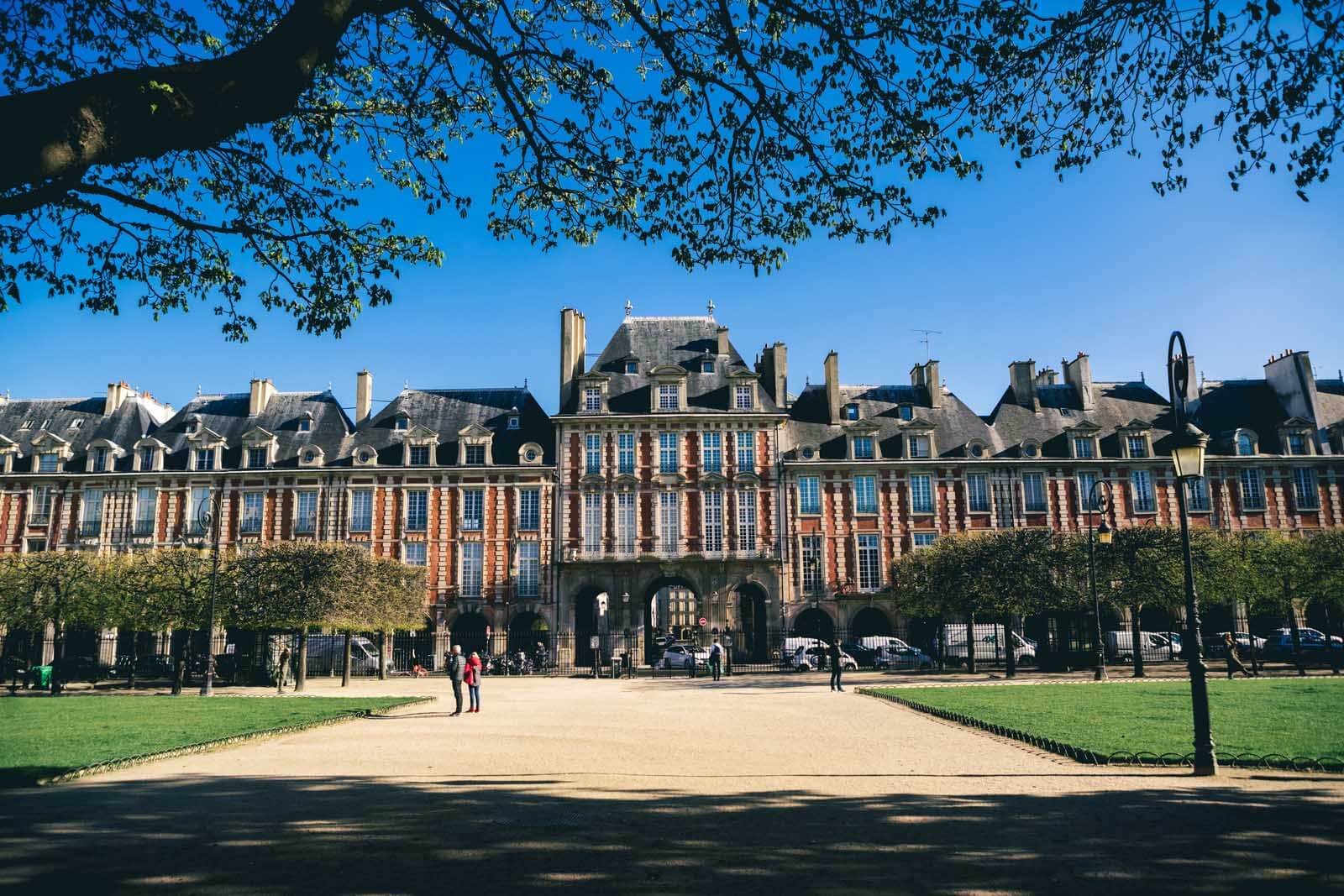 This was THE place to live in Paris during the 17th and 18th centuries, anybody who was important would live here from Parisian nobility to famed author Victor Hugo who wrote the Hunchback of Notre Dame.

Originally built by Henry IV in the early 17th century on the grounds where Hotel des Tournelles was and where the royal residence of Henry II was located. After Henry II death at a tournament at Tournelles, his wife, Catherine de’Medici of Italy had the complex destroyed and she moved the Louvre Palace.

Up until the French Revolution in the late 18th century, this was the gathering place for nobility.

This is one of the most incredible places to explore walking through the manicured garden and park in the center of the square of the perfectly symmetrical Place des Vosges to wandering under the arches.

Many of the mansions that were here have now been turned into some of the famous museums in Paris and in Le Marais including Musée Picasso Paris, Musée Carnavalet, and the house of Victor Hugo museum. 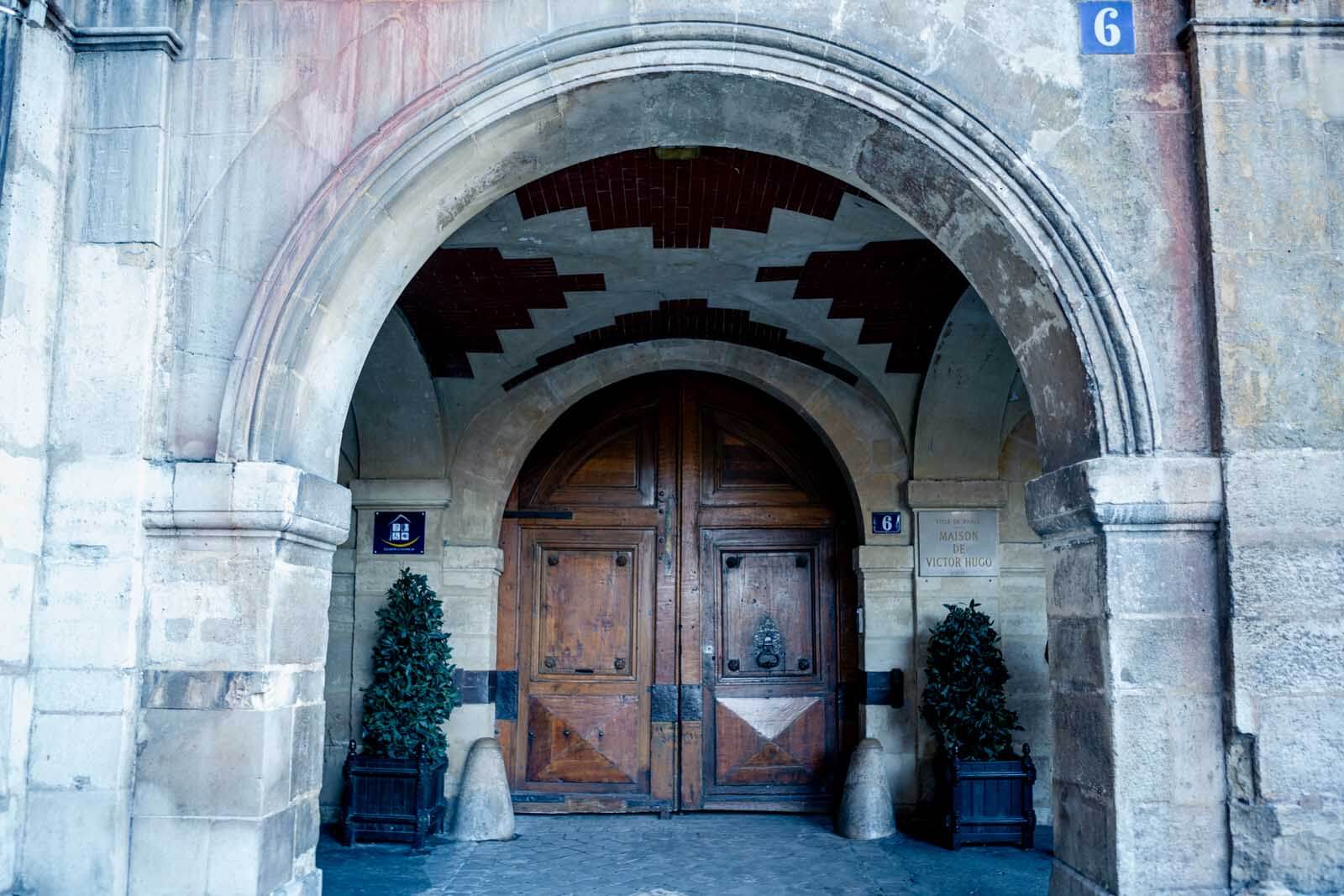 Another one of the best things to do in Le Marais, Paris in Place des Vosges is Maison Victor Hugo, the famed author of The Hunchback of Notre Dame.

This was the private residence of Victor Hugo, who lived on the second floor during the 19th century for 16 years where he wrote some of his most famous work including part of Les Miserables.

The residence is now one of the museums in Place des Vosges. The exhibit includes the different stages of Hugo’s life including before, during, and after his exile to Guernsey in response to the coup d’état by Napoleon Bonaparte in 1851. The exhibits feature some of his furniture and personal items and work on display. 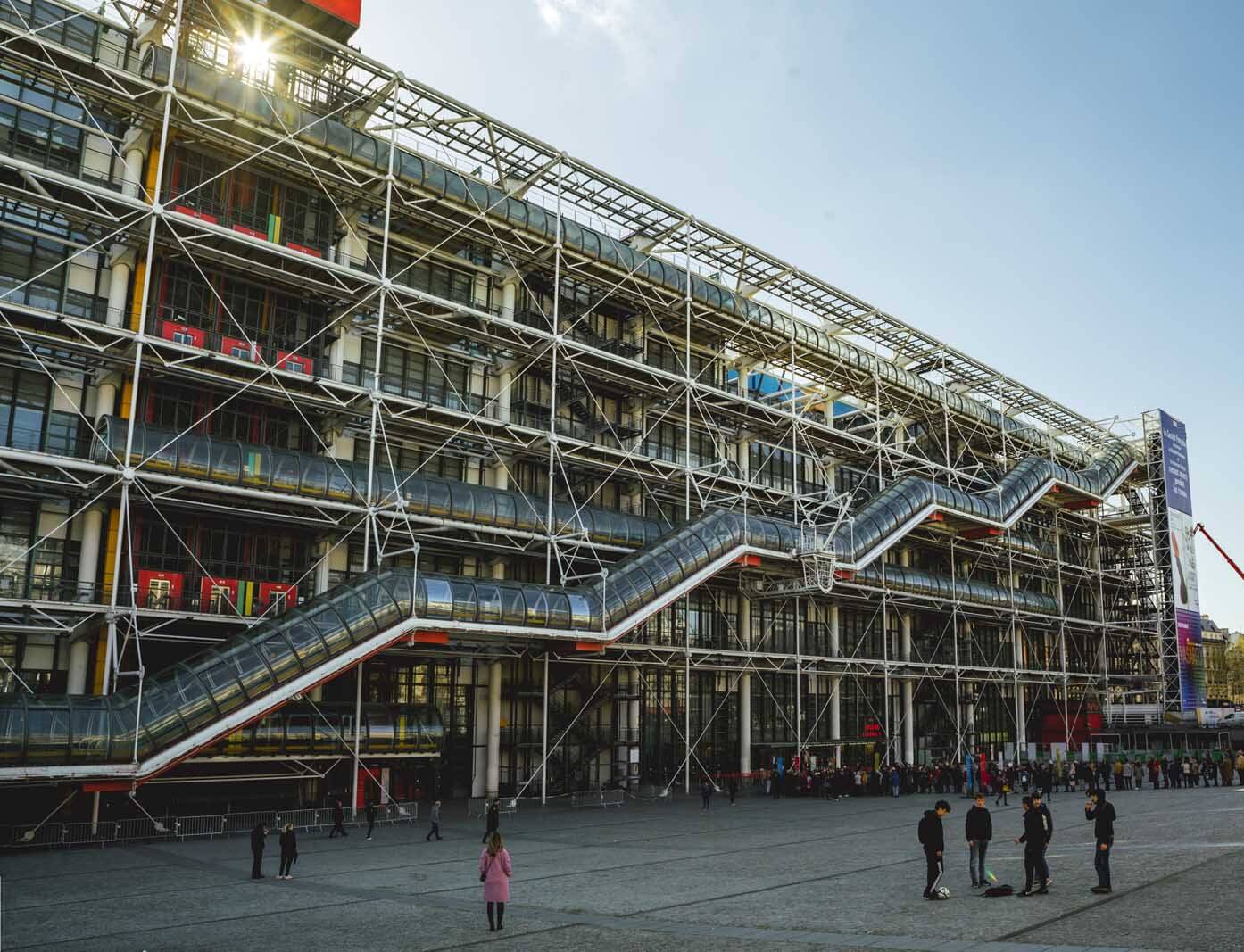 Another one of the best things to do in Le Marais, Paris for art lovers is visit the Pompidou Center of modern art. Technically, this isn’t in Le Marais, Paris but is still in the 4th arrondissement and just steps away and such an iconic landmark in the city we decided to include it.

You can easily recognize The Pompidou Center by its unique exterior with escalators on the exterior of the building and giant colorful tubes running across the building.

This is where you can visit the National Museum of Modern Art with notable works from artists like Picasso and Matisse to name a few as well as even more modern artists like Warhol.

There are permanent exhibitions as well as exhibitions on the top floor offering a stunning view of the skyline of beautiful rooftops throughout Paris.

This is one of the most famous museums in the city and worth allotting an entire morning or afternoon to explore.

Skip the lines by purchasing your Pompidou Center tickets in advance! 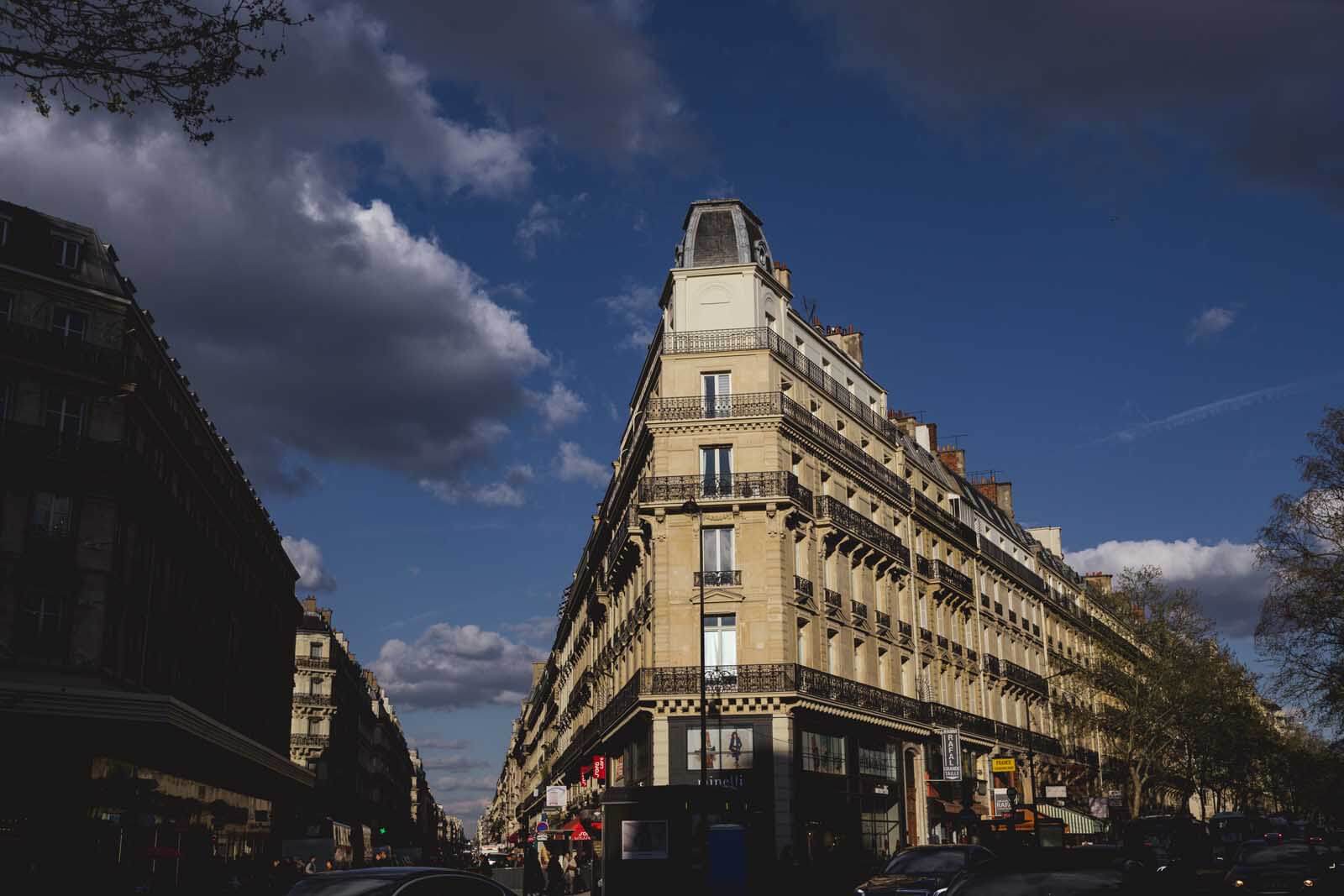 This next thing to do in Le Marais, Paris is for the shopaholics. Stroll or shop your way down Rue de Rivoli, one of the best shopping streets in the city.

While some of the best shopping is found along the Tuileries Garden and the Louvre, you can find this entire street lined with shops and many souvenir shops.

We explored inside BHV, the famous department store and one of the biggest in the city in Le Marais, Paris across from Hotel de Ville. One of our favorite stores we found nearby included La Chaise Longue which had all sorts of quirky gifts for home and HEMA which had just about every little knick knack you could think of from stationary to home decor for affordable prices.

We didn’t do much shopping, but this is one of the best areas to go if you want to experience one of the largest Paris department stores – which you can easily get lost in as well as other fun shops along the street. 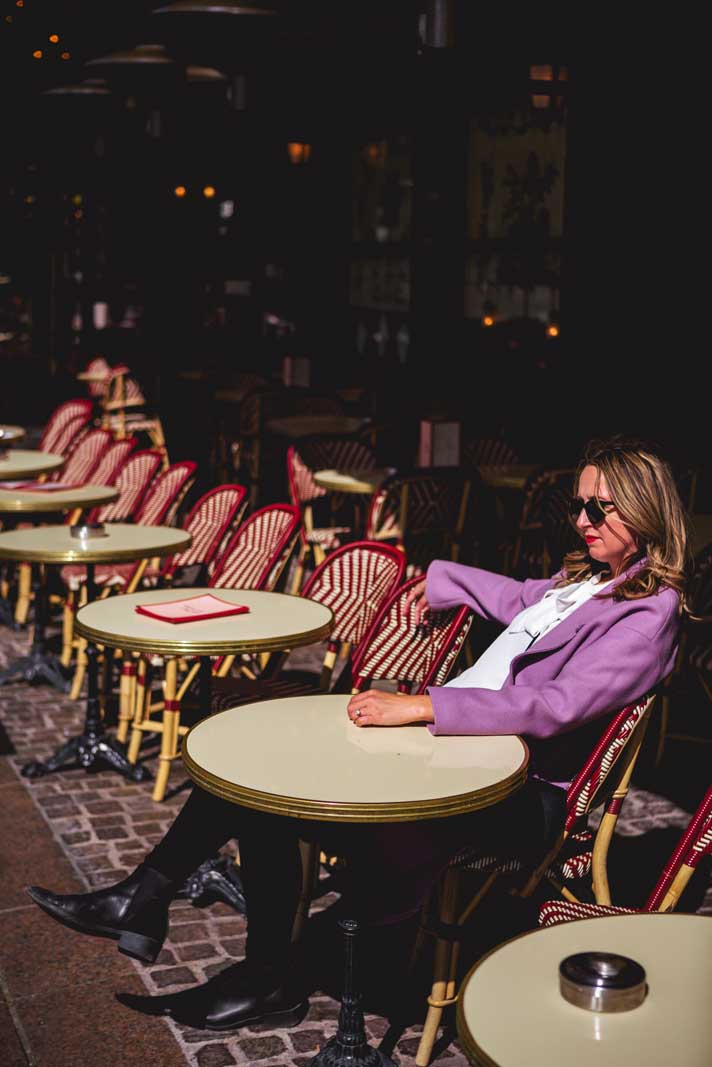 Another great thing to do near Le Marais, Paris for shoppers is visit Forum des Halles. Formerly the city’s fresh food market for produce, this modern shopping mall is one of the most impressive in the city constructed in the 1970s.

Much of the shopping is built underground in this uniquely designed modern building. You can find everything from small independent retailers and boutiques to big name brands, restaurants, and entertainment options like a cinema inside.

On the outdoor and above ground level you can find many open-air restaurants and cafes to sit and people watch while you enjoy a drink or a meal. 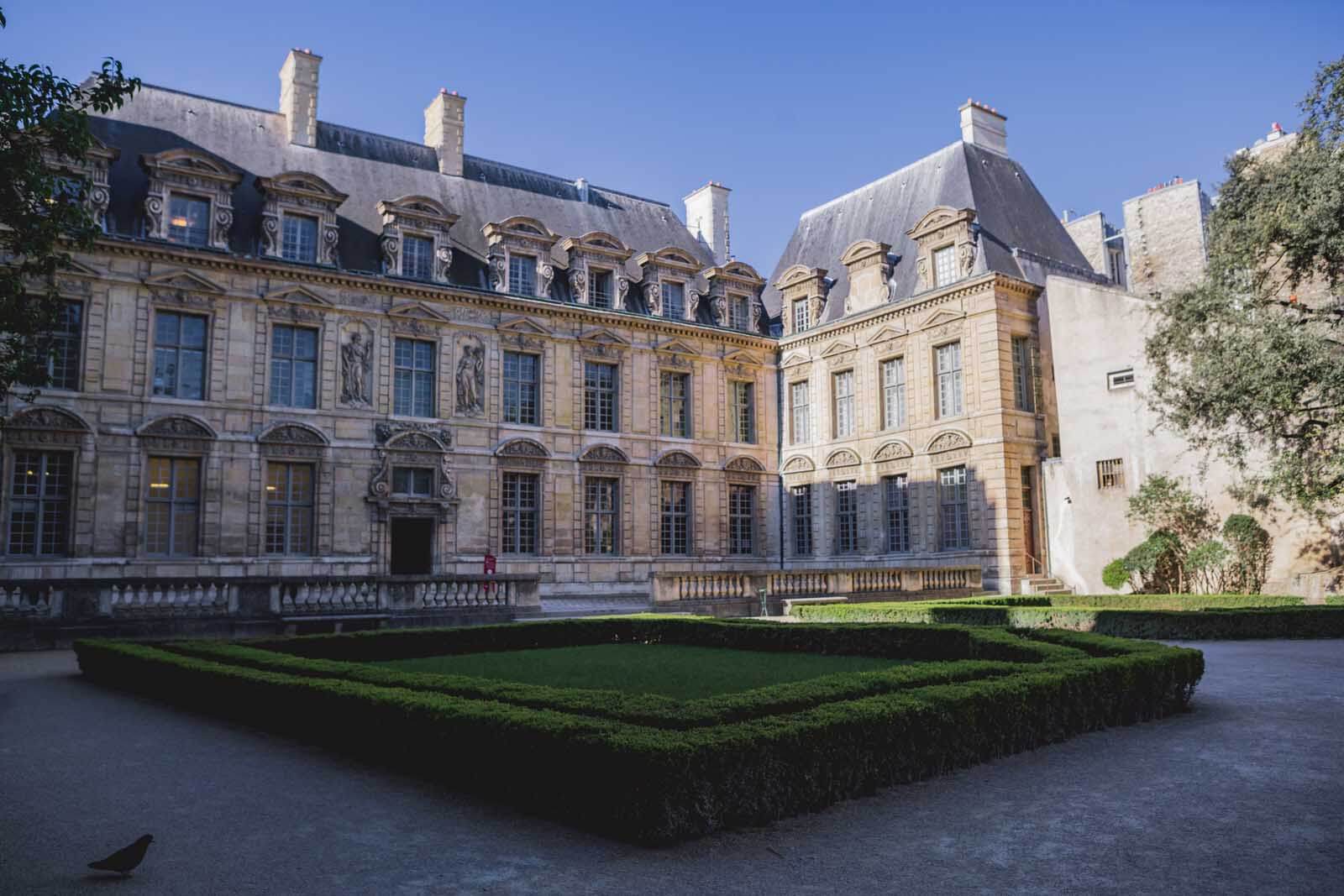 Another one of the fantastic things to do in Le Marais, Paris especially if you’re already visiting Place des Vosges is walk through the gardens of Hotel de Sully. This is a Frech historic monument and the place where the organization responsible for the French national heritage sites is and connects directly and gives walking access to Place des Vosges, or Place Royale.

You can’t stay in this hotel and access to the inside is not allowed, but you can walk through the gardens on your way to or from Place des Vosges while exploring the things to do in Le Marais, Paris.

You can walk through the gardens and orangery which were built in the 17th century. There are even benches in here if you find yourself enjoying this space for a nice walking break. 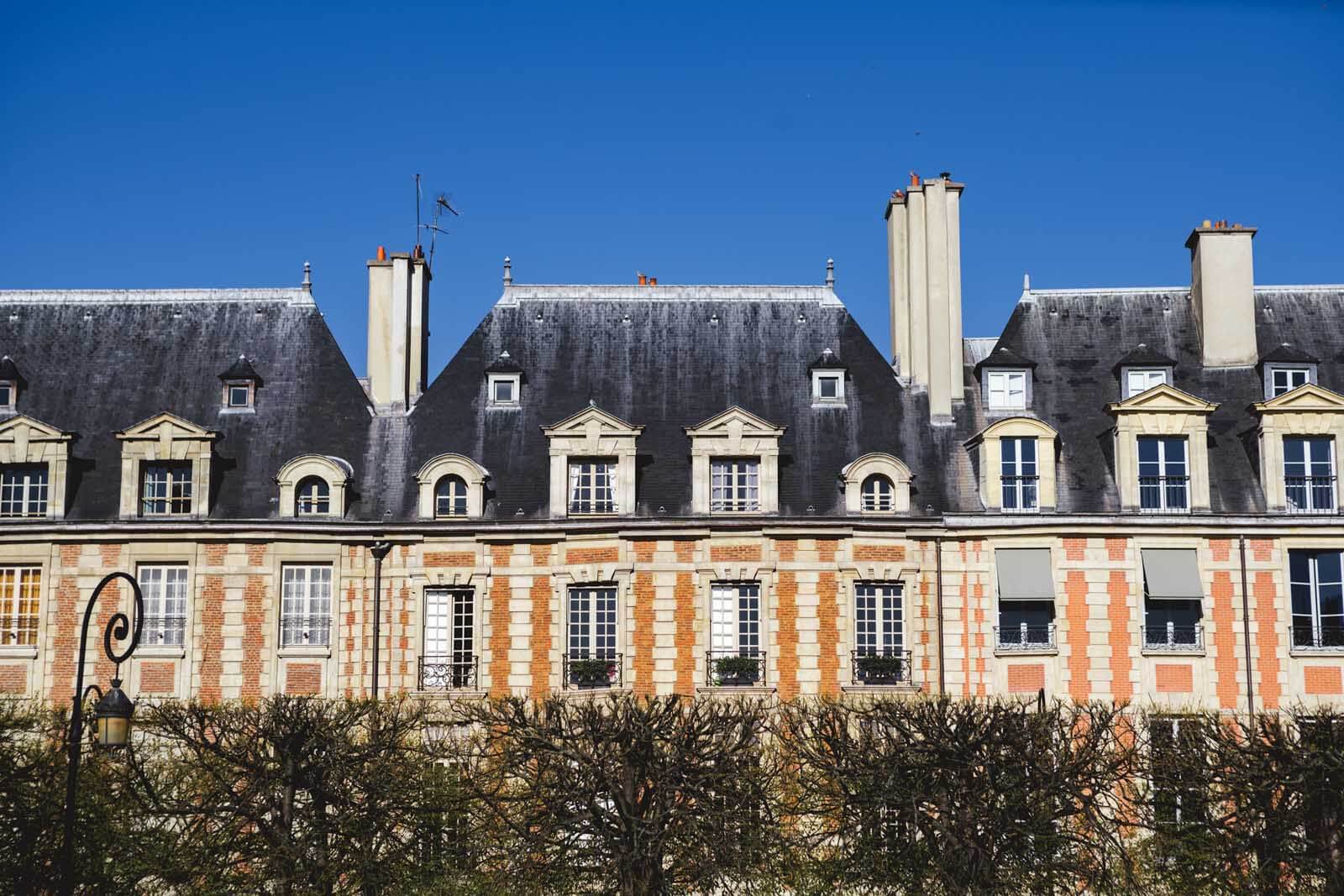 While this area isn’t the largest in the city there are quite alot of museums and art galleries in the area to explore which is why we picked this as another top pick for things to do in Le Marais, Paris. 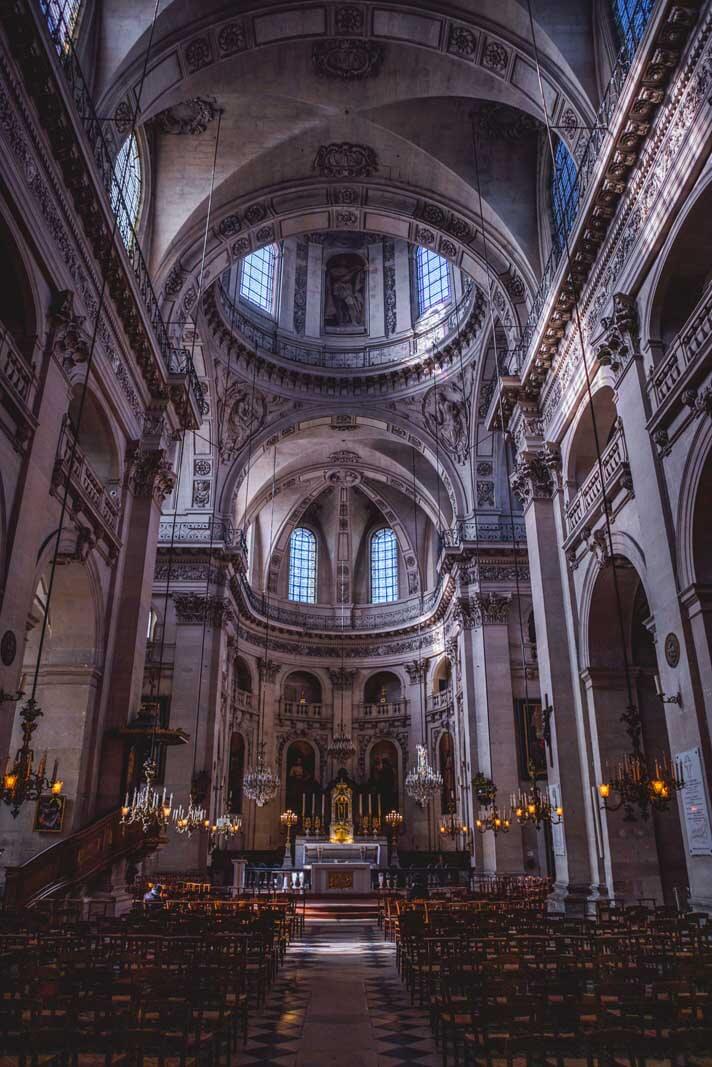 Another one of the best sites and things to do in Le Marais, Paris while you’re wandering is walk to the Église Saint-Paul-Saint-Louis church. There are two ways to get here, you can either go down the narrow passageway or down the main road on rue Saint-Antoine.

We came in the main entrance on rue Saint-Antoine and left through the passageway, we recommend doing both.

The church is done in both French and Italian Baroque styles and is the first church in Paris to break away from the Gothic style of architecture.

Next to the church is Lycée Charlemagne which is another site founded by the Jesuits founded by Napoleon Bonaparte. The lycée, for those who didn’t know like me, is a Jesuit secondary school with a full curriculum leading to a baccalauréat degree.

One of the charming areas to explore and things to do in Le Marais, Paris is stroll down Rue Chapon, not too far from The Pompidou Center. Here you’ll find beautiful lanes full of galleries, colorful murals, and Passage de l’Ancre.

If you were interested in visiting, its called Pep’s. During our visit, they were repairing the sign as we were there on a ladder, it’s too bad we didn’t come back to photograph it because its just as adorable as the rest of the passage.

Strolling through here you almost feel as if you’ve left the city and were transported in the countryside in a small town somewhere. 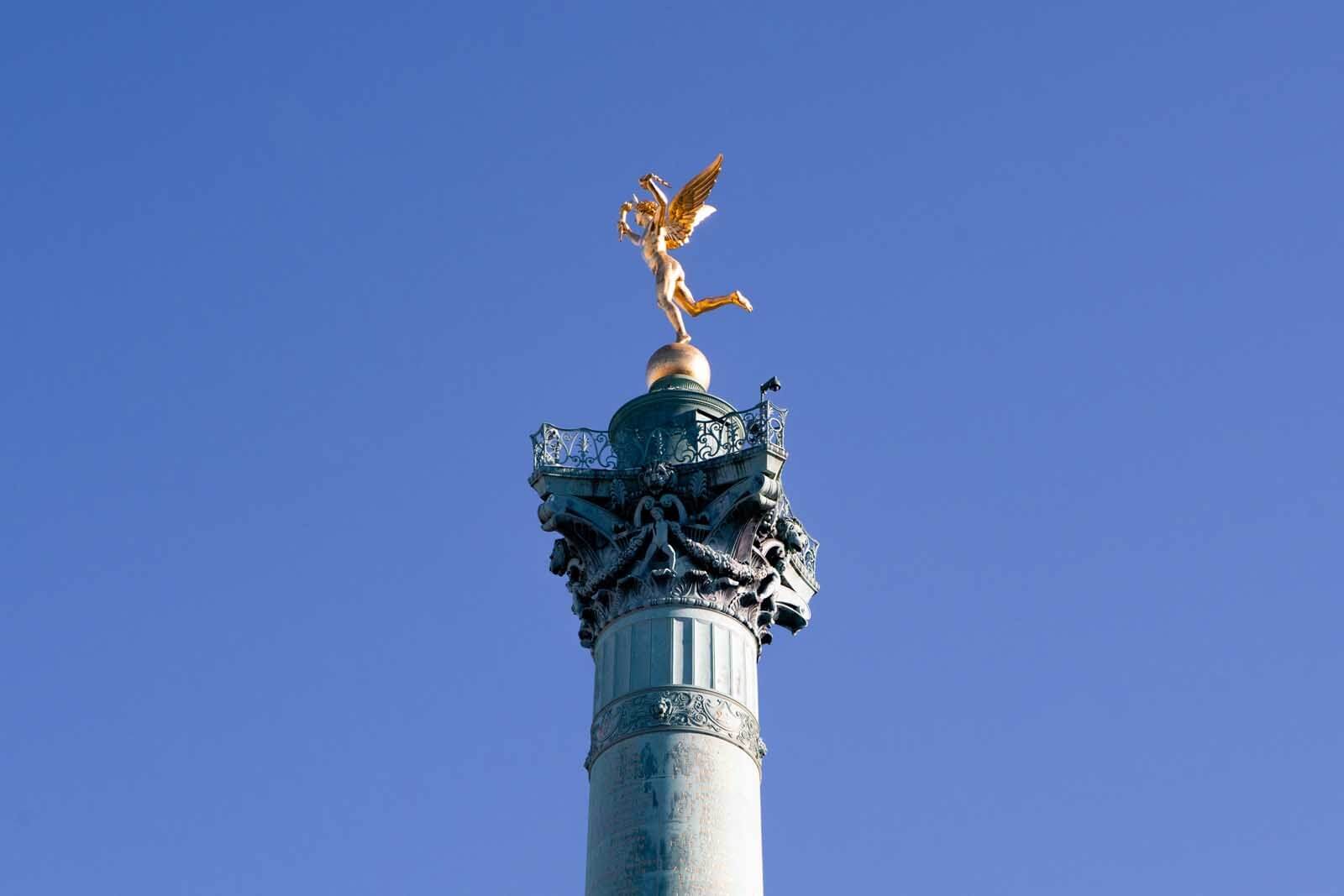 Technically not in Le Marais, Paris but close enough and iconic enough to mention is The Bastille. For those who don’t know the history of France so well, like me, the Bastille is an important symbol for the domestic conflicts in France for history as we know it.

The Bastille was originally a fortress built to defend the city from the English in the Hundred Years’ War in the 14th century. The design of the fortress was strategic and innovative that’s style was copied alot.

After the destruction, almost none of the original Bastille was left except for some of the foundation where you can still find today at the corner of Boulevard Henri IV and the Quai de Celestins.

The column you see and know as the Bastille today is known as the July Column and it stands in the center of the original Bastille.

Where to Stay in Le Marais Paris 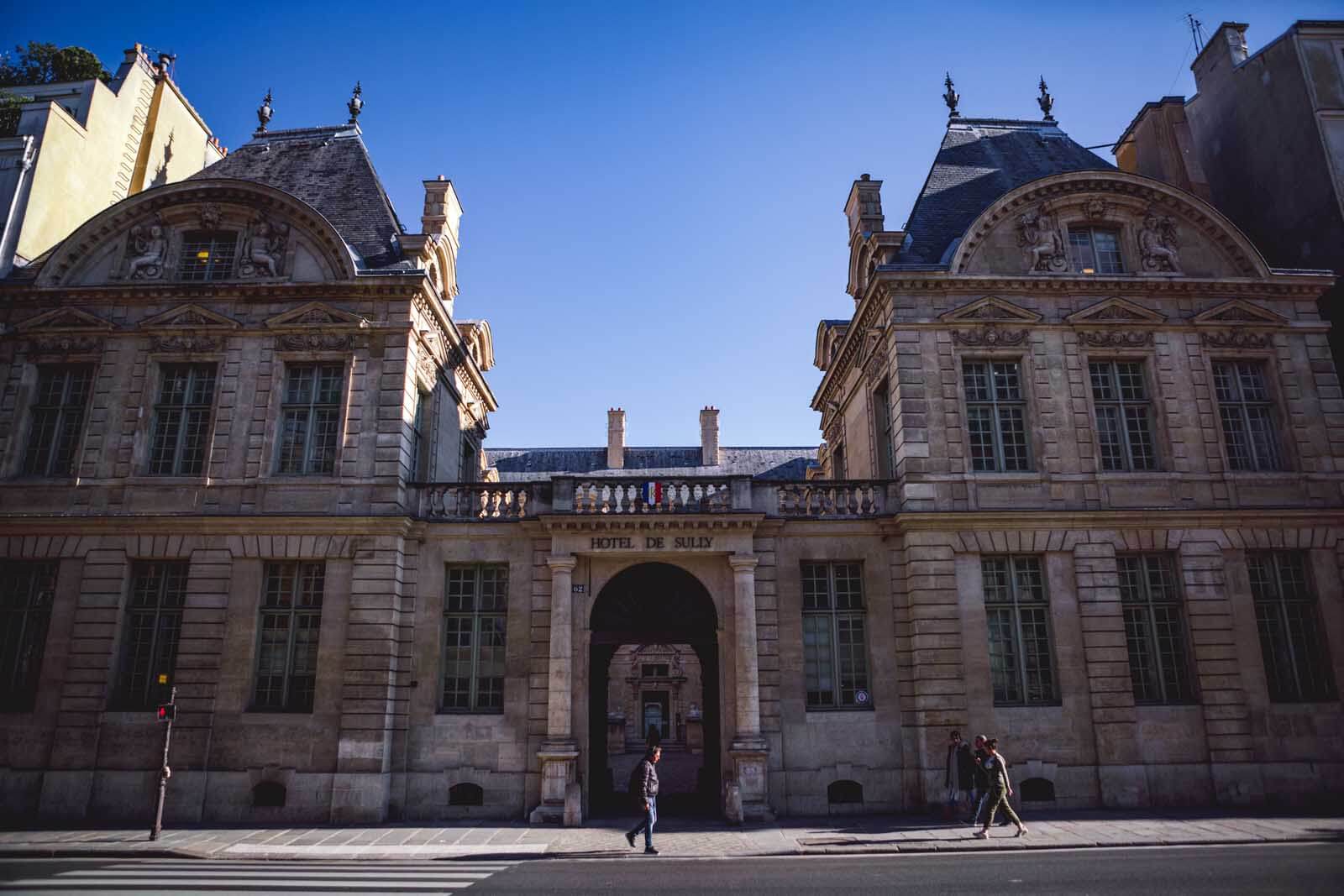 This beautiful hotel in Le Marais, Paris is a great option to stay in the area. The interior is inspired by 18th-century writer Beaumarchais who lived in the next door mansion. The hotel is quaint and close everything to do in Le Marais. The rooms are classic and some offer private balconies with incredible views. Personally, this is our choice of where to stay in the area as it is just too adorable it makes you feel more like you’re in the French countryside rather than in the heart of the city.

This is another great choice for where to stay in Le Marais, Paris. This stylish hotel has chic rooms with beautiful interior design with a prime location just a 4-minute walk to The Pompidou Center and a 2-minute walk to Hotel de Ville. The rooms are more cozy which is typical for a Paris boutique hotel.

Check out these great tours taking you through the best things to do in Le Marais, Paris.

Embark on a journey through the best things to do in Le Marais, Paris with a guide by foot. The tour will take you through the top sites, hidden gardens, and more.

Enjoyed this post and guide to all the best things to do in Le Marais, Paris? Bookmark for later or share the love below on Pinterest. 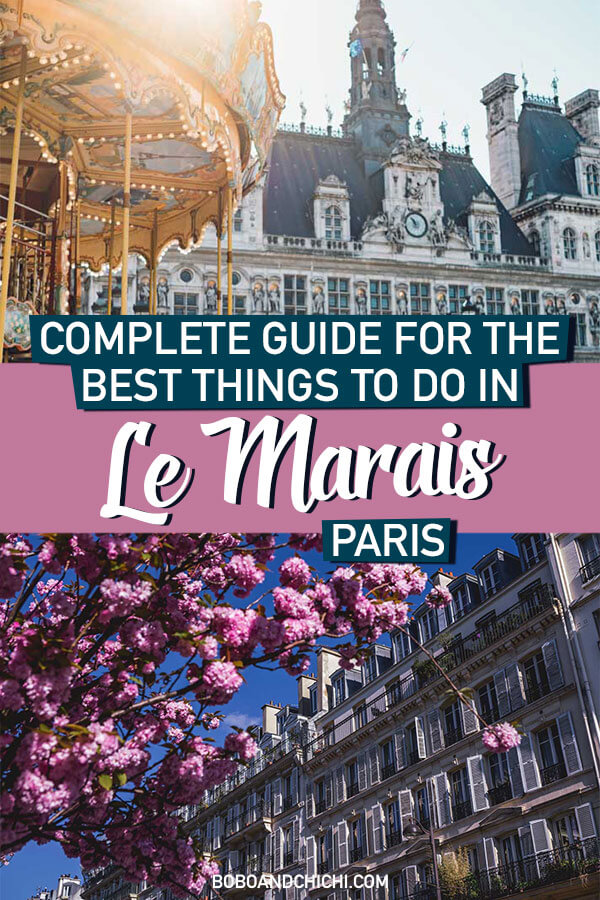