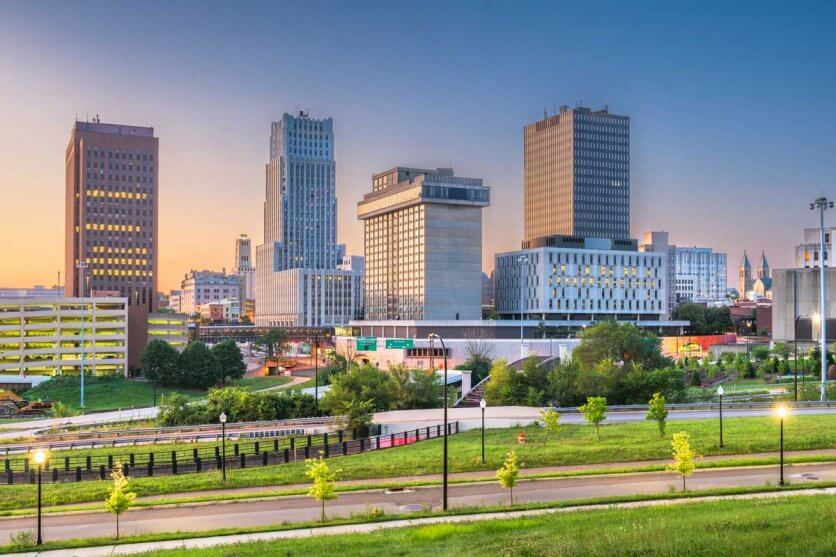 Ohio’s 5th Largest city, and nestled inside is a range of beautiful deco architecture, hip neighborhoods, exciting nightlife, exceptional food, and tons of great things to do in Akron. The Rubber City was once a bustling industrial mecca due to the foundation of Goodyear and Firestone companies at the turn of the century, and it only grew from there.

Sometimes you can catch a glimpse of the Goodyear blimp floating around on sunny days (sometimes even in Cleveland!). While the city can’t claim fame (people often ask, “where the heck is Akron?”) it can claim a bit of both serenity and vitality, depending on what you’d like to do in Akron.

Akron is a great place to eat, drink and explore and in this guide we’ll check out some of the best things to do in Akron Ohio.

What to do in Akron, Ohio During Your Visit

One of the most historically important sites and things to do in Akron, which is also one of the most famous sites, Stan Hywet Hall and Gardens. What was once the country estate of Goodyear Founder F.A. Seiberling and his wife Gertrude, now serves as a museum and event hall donated to the city of Akron in 1957 by Seiberling’s children.

Gertrude Seiberling was an avid art collector and gardening enthusiast-you can most definitely tell when you pay a visit to the Manor House and Corbin Conservatory.

Hands down, one of the best things to do in Akron is to take a tour of the gardens in springtime. The beauty that is the Gardens is renown in Akron and beyond. Gardens aren’t your thing? Join the community for many public events it hosts, or even take your dog for a walk on the sprawling 70-acre estate.

If you happen to be visiting in the winter, this is a great time to do a holiday tour of the interior where you can see this beautiful home decked out with holiday décor.

Stan Hywet is nearby many neat neighborhoods in Akron, including Highland Square- another fun thing to do while in Akron!

Be sure getting something sweet from Mary Coyle, for Italian gelato or if you want something more savory something off their fine Italian menu. If you need a pick me up after, head to Angel Falls Coffee Company, grab a drink and enjoy sipping on something delicious while looking at local art and eclectic decor.

Despite the newer additions to Highland Square, the neighborhood is still teaming with remnants of the rubber-era. The Highland Theater one of these gems and only a short walk down from Angel Falls. Stepping inside you take a trip back to the 1940s with its original interior design, neon-sign lit bar and concession stand. The theater only plays one movie for a time, but for a small price you can sit down and experience history- and have a cocktail while you’re at it!

You won’t be wondering what to do in Akron when you’re in Highland square at night, the main strip is home to many nightspots, like Ray’s Pub, Zubs, the Matinee, and Square Bar, and it’s only a short Uber trip to downtown.

The Music Scene in Downtown Akron

All the fun things to do in Akron (if you like city life) happens downtown. With many wonderful food and entertainment options, you’re guaranteed to have a good time.

You can see live music at Musica, BLU Jazz+, or High St. Hop House among many other places. Akron has a bustling and eclectic music scene that shouldn’t be missed; musicians such as Mark Mothersbaugh from Devo, The Black Keys, The Waitresses, and Ruby and the Romantics (to name a few) all claim Akron as their hometown.

Not only is there always a show going on in Akron but there’s always someone to tell you about it. Rock and Roll not your thing? No problem! The city also boasts a beautiful Akron Symphony Orchestra, you can check them out in various summer outdoor venues (hello, Blossom, hello Lock 3,) as well as the historic Civic Theater.

The Akron Civic theater is a true Akron beauty and what to do in Akron, Ohio if you’re looking for something unique to the city. Built in 1929, the Civic is one of the few “atmospheric” theaters still left in America. Beautiful, albeit perhaps distracting for some, you can actually see “clouds” move over the ceiling, and the sparkle from the stars as the theater darkens.

Not only is the ceiling a dynamic display, but the Civic still boasts original architecture and design elements throughout. A beautiful meld of old European charm and Mediterranean flare.

Catch a show, a concert or play here, and before your entertainment begins you should grab a gourmet grilled cheese sandwich and brew from the Lockview or a quick drink at Baxter’s. Both are located right across the street from the Civic (walking distance-THANK YOU!)

While in downtown Akron you should make a point to visit as many of the Lock Parks as you can. They all have their own charm, but probably the most visited is Lock 3. Open year-round, and hosting many community events from concerts to ice skating there is always things to do in Akron.

Even If you’re not around for one of their summer concerts, you should still take a walkthrough, see the Devo mural.

The museum is free on Thursdays and hosts a wide collection of art from the 19th century to modern art. The outdoor garden is free to the public.

Inside the museum, you’ll see pieces from Diane Arbus, Marina Abramovic, and Famed Cleveland Op Artist Julian Stanczak, among others.

If you’re thirsty after admiring the local arts and culture scene be sure to walk down to Akronym Brewing, one of the many Breweries around the city and it’s a pretty quick walk from the museum.

One of the best things to do in Akron for beer lovers! Why not sample some of Akron’s finest craft brews while in town? Craft Breweries have exploded in Northeast Ohio in recent years, but the oldest and probably most well-known is Thirsty Dog.

The taps are always changing but the theme remains the same, Barktoberfest? Ankle Biter? How about a Man’s Best Friend? Trust me, the beer won’t disappoint. Hanging out in downtown isn’t the only thing to do in Akron-with new hot spots popping up all over, there are many options for fun in the Rubber City.

Cascade Valley aka Northside District has been built up in recent years. With old staples such as Luigi’s Pizza melding pleasantly with the new additions, the atmosphere that’s been created is chic, friendly, and always a good time.

Get some dinner at Jilly’s Music Room and stay for the live music, drinks and chill Jazz bar-type ambiance.

Afterward, you can head over to the Northside Speakeasy and have some delicious artisanal cocktails mixed in the small, dimly lit bar that gives a vibe of a secret not meant to be shared. Unfortunately, the place is small, so go early and get a cozy private seat inside or by the patio fire pit (that is, if you can find the hidden door to get inside.)

While you’re there, make sure to check out the Northside Marketplace. Akron has transformed a drab industrial space into a hip urban shop, and inside you’ll find an eclectic mix of local businesses coming together to sell you some of Akron’s best goods.

Looking for something to take home from Akron? This is the place for you, with over 60 vendors they sell anything from local honey and hot sauce to jewelry, clothing, and more.

The Marketplace also boasts a social lounge complete with a bar and rolled ice cream shop. Something for everyone to check out- So don’t miss it!

If you’ve had enough of the city life and love the outdoors then this is what to do in Akron for you! Check out Akron’s more scenic side nestled in the Cuyahoga Valley National Park. A seemingly infinite green space nearby a bustling metropolis.

Enjoy a hike in their over 125 miles of trails, including a trail to Brandy Wine Falls, a beautiful 65ft waterfall in the forests of the Cuyahoga Valley.

The scenery is a mix of stunning greenery, rocky ledges, and beautiful pine forests. CVNP also boasts an awesome towpath trail where you can essentially bike/hike all the way to Cleveland if you wanted! The towpath is mostly gravel (with exceptions when the trail cuts into the city) and is situated in some of the most beautiful parks in the area.

A gorgeous way to get out and see all that the Valley has to offer, the wildlife, and the natural flora of the area.

If the trails sound appealing, but the energy exertion does not, you can hop a ride on the Cuyahoga Valley Scenic Railroad. Another great thing to do in Akron!

The railroad is a private, non-profit operation that promotes the historical restoration of train cars. They host specialty events on the train such as beer and wine tastings, holiday excursions, and murder mystery dinners.

The scenery is beautiful no matter what season you depart in, and can be an especially romantic way to spend the evening. The railroad also has stops that you can bike to and ride back on creating an experience that’s hard to find anywhere else.

Why don’t start your trip out in Akron and end up in Cleveland? The two cities are close enough that taking the train would be a perfect transition from cities, plus there are also a ton of awesome things to do in Cleveland too. Not to mention a beautiful end to your visit to Akron.

Where to Stay in Akron

There are some really great options for where to stay while exploring all the best things to do in Akron, Ohio. We’ve picked out the top places we recommend to enjoy your trip!

This is a great option for where to stay while exploring all our ideas for what to do in Akron, Ohio during your trip. Located along the scenic Cuyahoga River, this modern hotel offers a comfortable place to base near Cuyahoga Valley National Park. Don’t miss the outdoor patio that directly overlooks the river rushing. This is also a great location if you’re flying in and out of Akron as the Akron Fulton International Airport is just 10 miles away.
Book Now on Booking.com | Compare Prices for Later on Hotels.com | See Rates on Expedia.com

This is the best option for where to stay in Akron during your trip if you’re looking to be downtown and close to all the great activities and things to do in downtown Akron. You’re still just a short drive away from everything else including Cuyahoga Valley National Park. The rooms are sleek and modern and there’s even an indoor pool for guests.

About the Author: Dani is an artist living in Akron, Ohio. 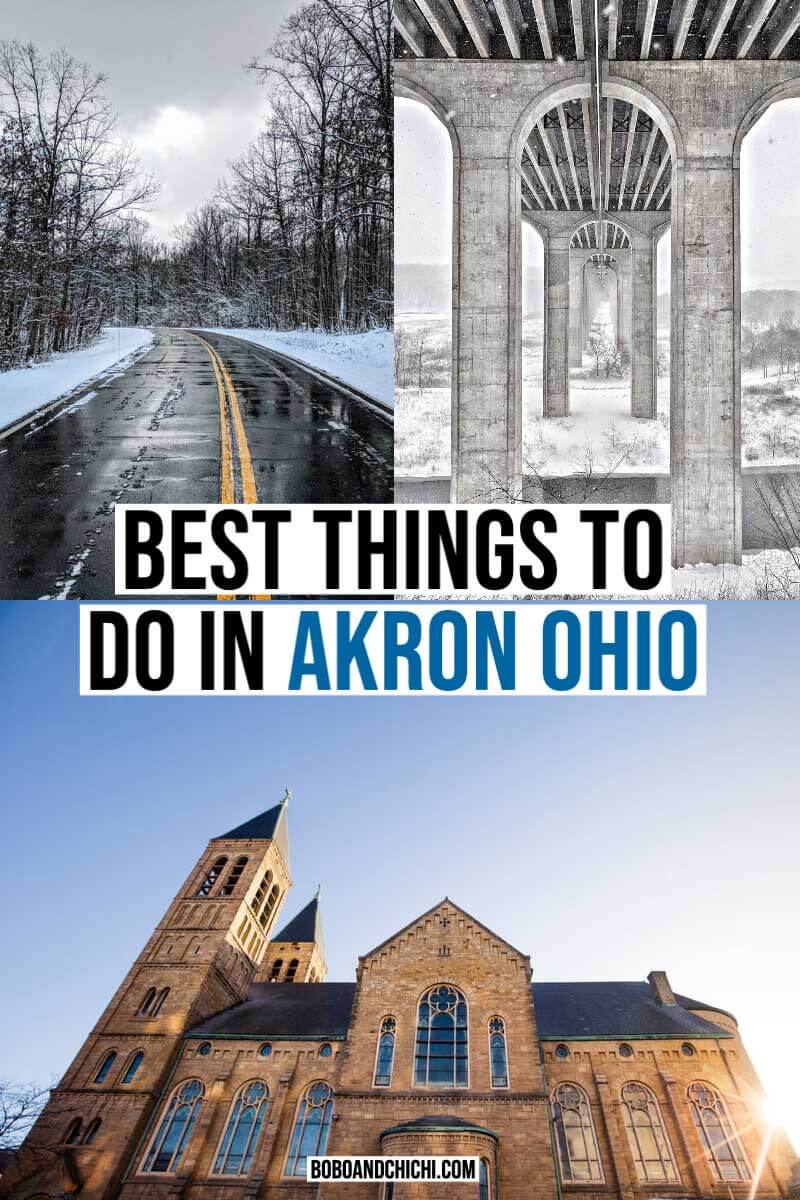