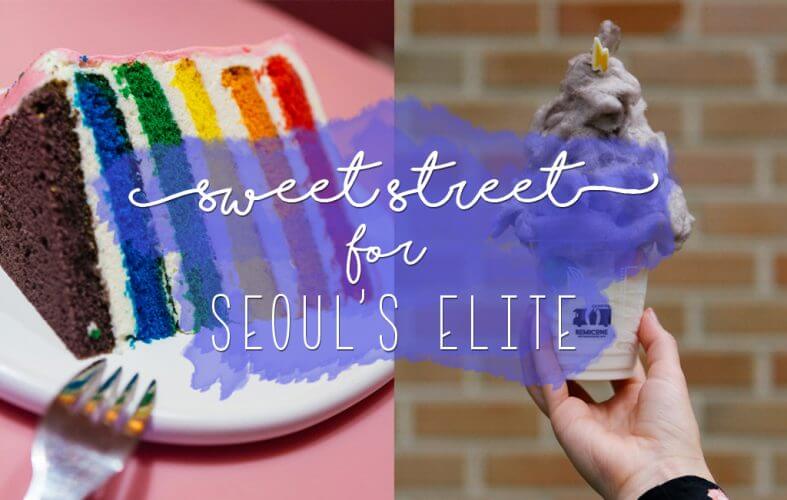 Have a sweet tooth? Check out all the sweet things to do in Garosugil, Seoul – one of the most ritzy neighborhoods in the city!

We aren’t known to have a HUGE sweet tooth, but every now and then there will be some sort of sugary delicacy that will tease us and start making our mouths water until we try it.

This just so happened to building up over time after seeing several photos of this famous rainbow cake and cotton candy ice cream in Seoul and knew we had to explore all the sweet things to do in Garosugil.

It turns out both places are located just doors away from each other in the ritzy neighborhood of Garosugil. We saw so many sweet tooth cafes on this street that Scott and I nicknamed this area as the Sweet Street for Seoul’s Elite.

Garosugil is not for your average consumer or budget-conscious traveler. This high-end luxury area does not see bobo and chichi frequently due to it’s expensive prices and our strict savings plan for traveling the world.

Although designer clothes, fancy restaurants, and expensive cocktail bars are nice, they don’t exactly fit into our budget for saving for our future and are things that we don’t really need to make us happy. Read all about it in our road to 42k here!

With that being said, we understand the allure of this area because each and every one of those expensive restaurants, bars, and stores we talked about all look very inviting with their posh or cool looking atmosphere. So tempting and some of the best known things to do in Garosugil is the designer shopping!

Anyways, we have been wanting to check out two places in particular in this area. One being a cafe famous for it’s cakes named Dore Dore, and the other being this cute AF looking cotton candy ice cream.

Instagram photos spoke to us and it’s been on our radar. I even named Dore Dore in our post about different types of cafes in Seoul! A friend of ours, Sam from There She Goes Again, was coming up to Seoul for the day and we only had a short time to see her, so what better way to spend some time with a friend other than get some tasty treats?!

Read Next: Coolest Things to do in Hongdae 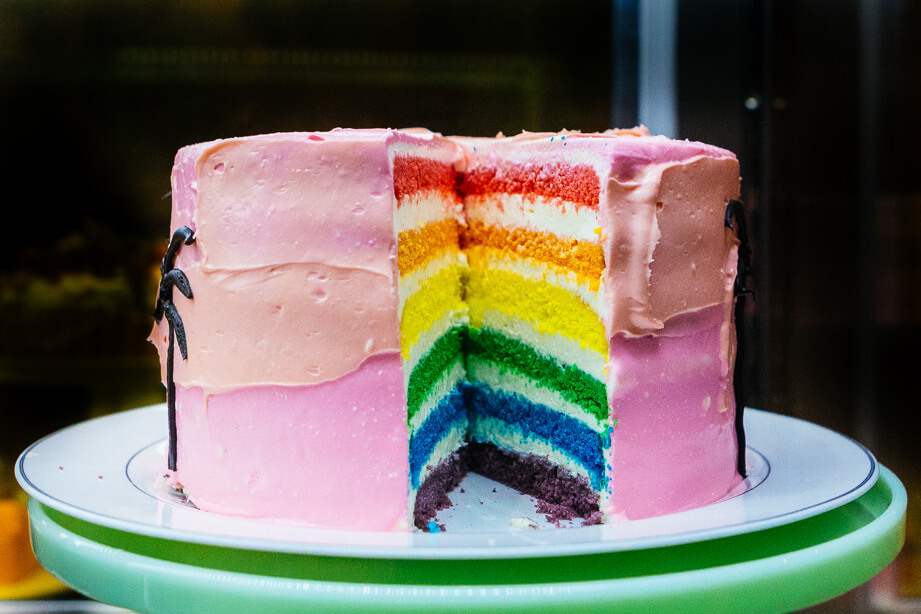 Our first stop and one of the sweetest things to do in Garosugil is Dore Dore.  We noticed as we were walking down this street that there were TONS of dessert places. When we found Dore Dore there was literally a 3 story building across from us that was soley for wine and cheesecake.

Dore Dore was also 3 stories with a basement, pretty impressive size for a cafe! But Koreans take their cafes seriously – which we love, and it’s not uncommon to see HUGE cafes covering multiple floors. The interior of this place spoke to us.

They decorated the walls with different soft pastel colors in each room and every floor. The colors were calming and made me want to eat a sweet treat. 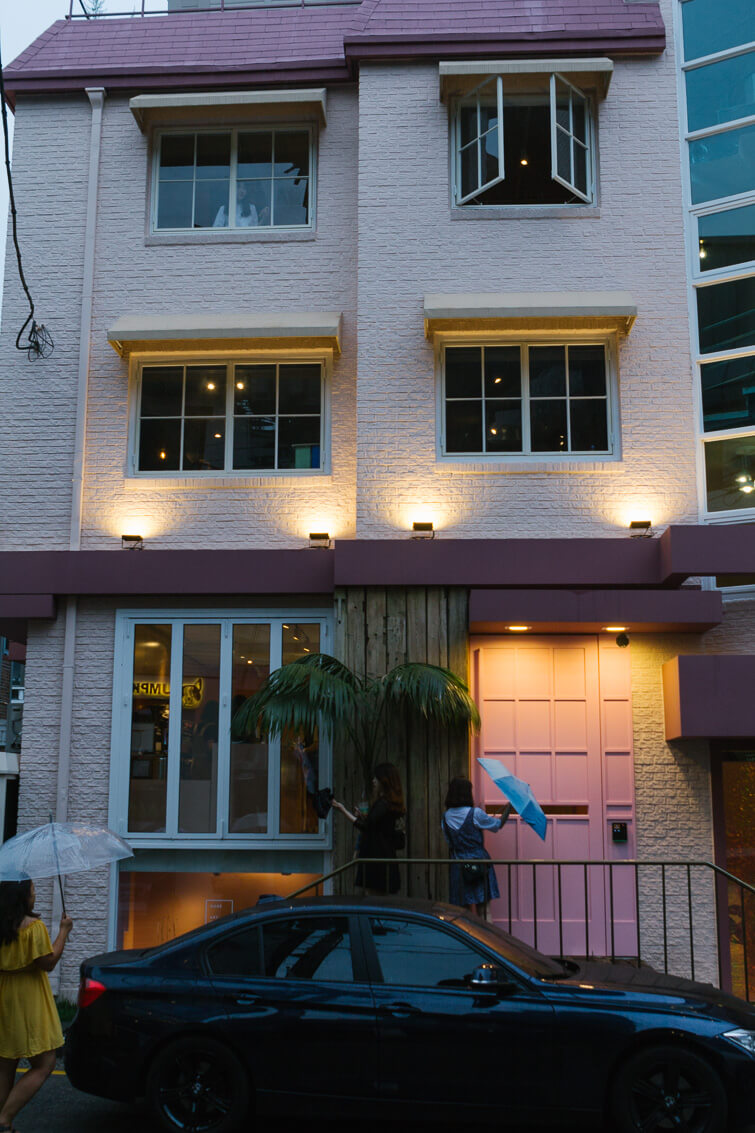 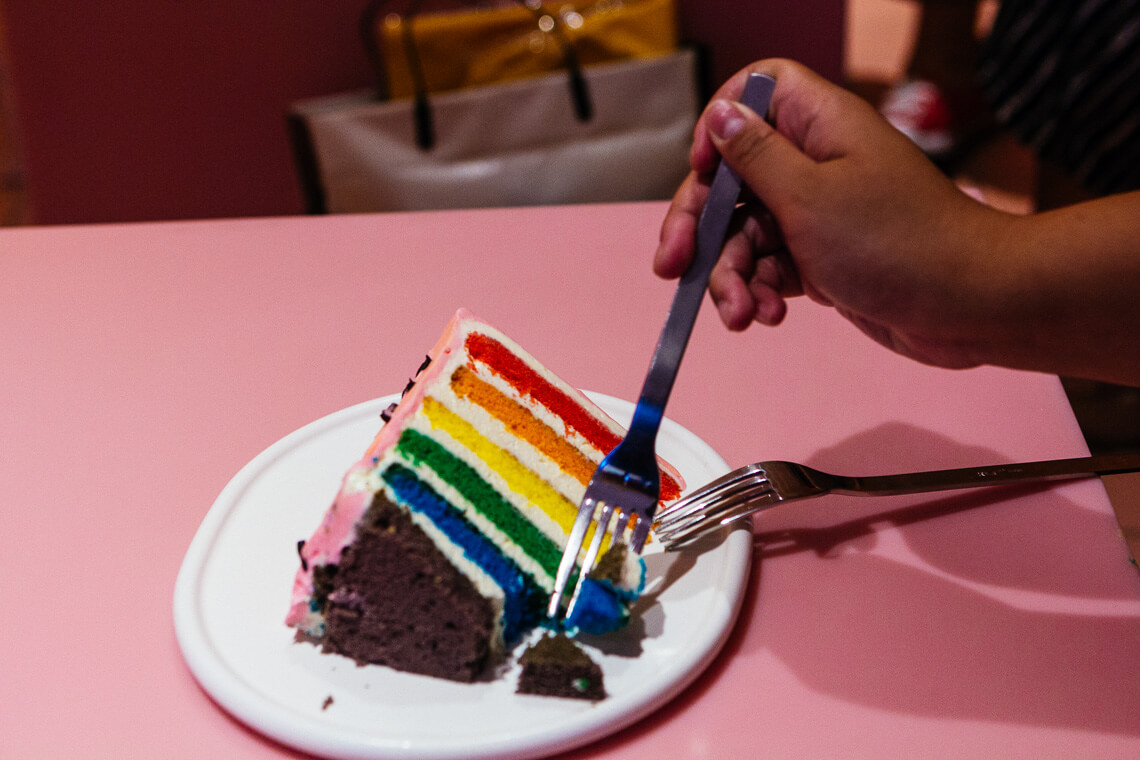 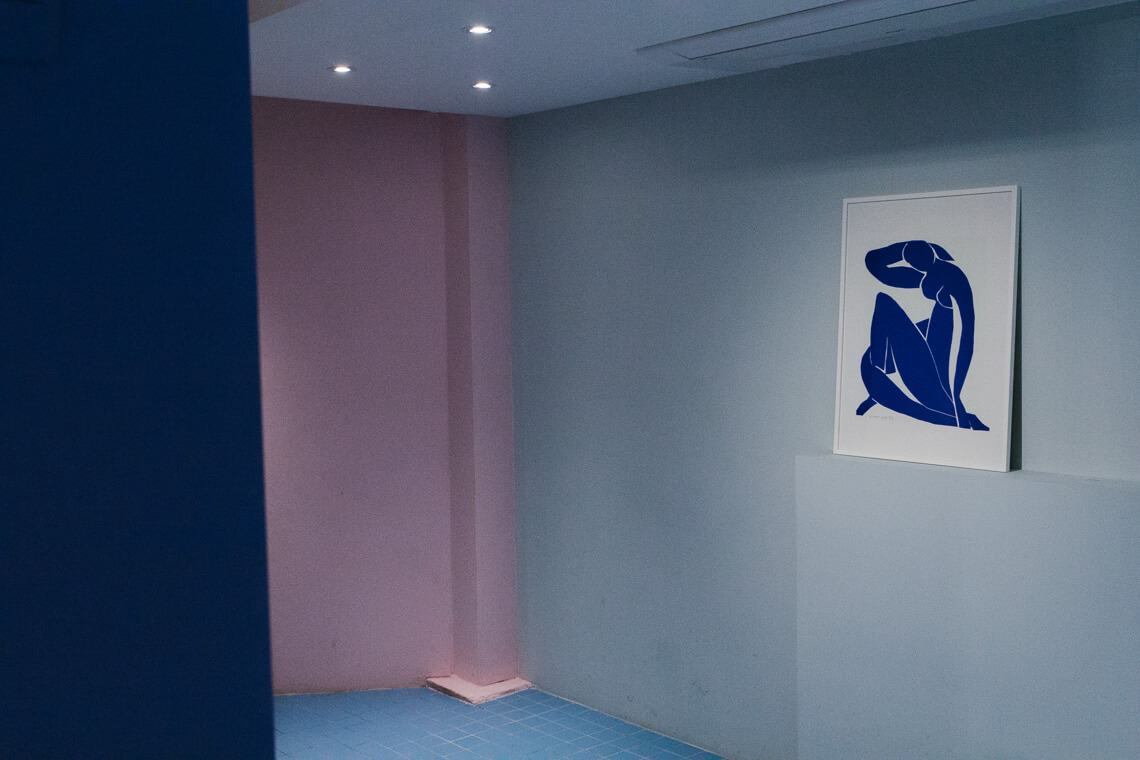 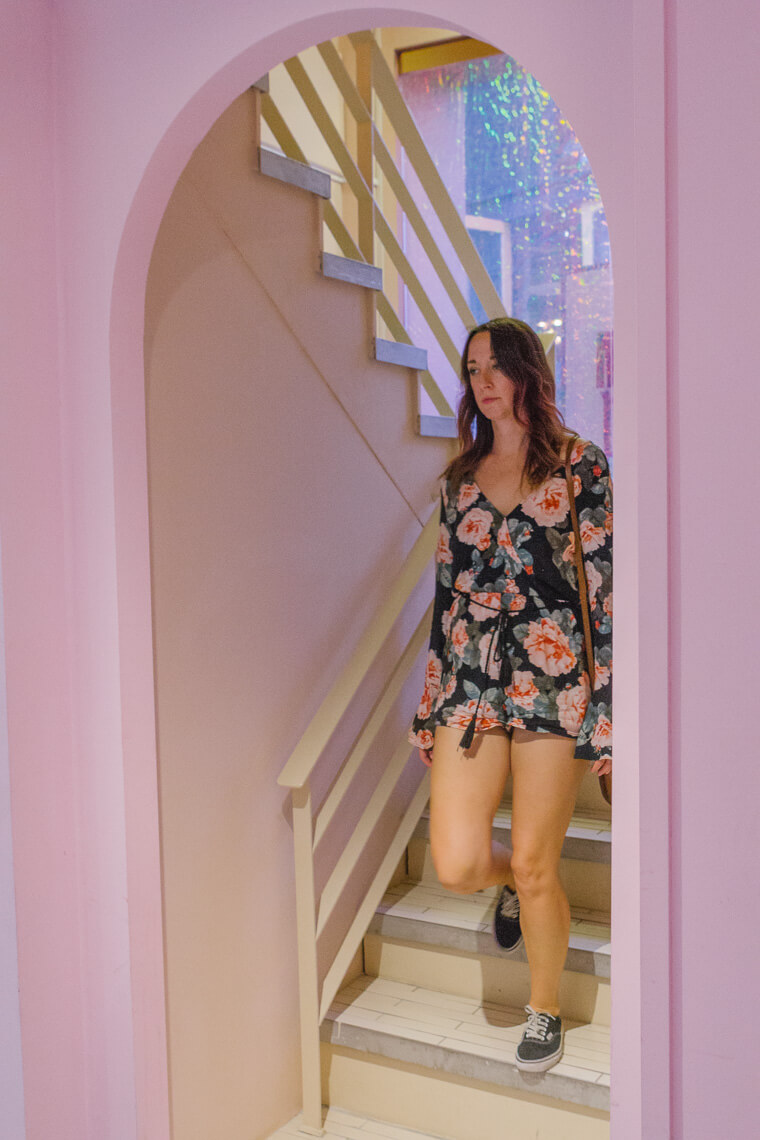 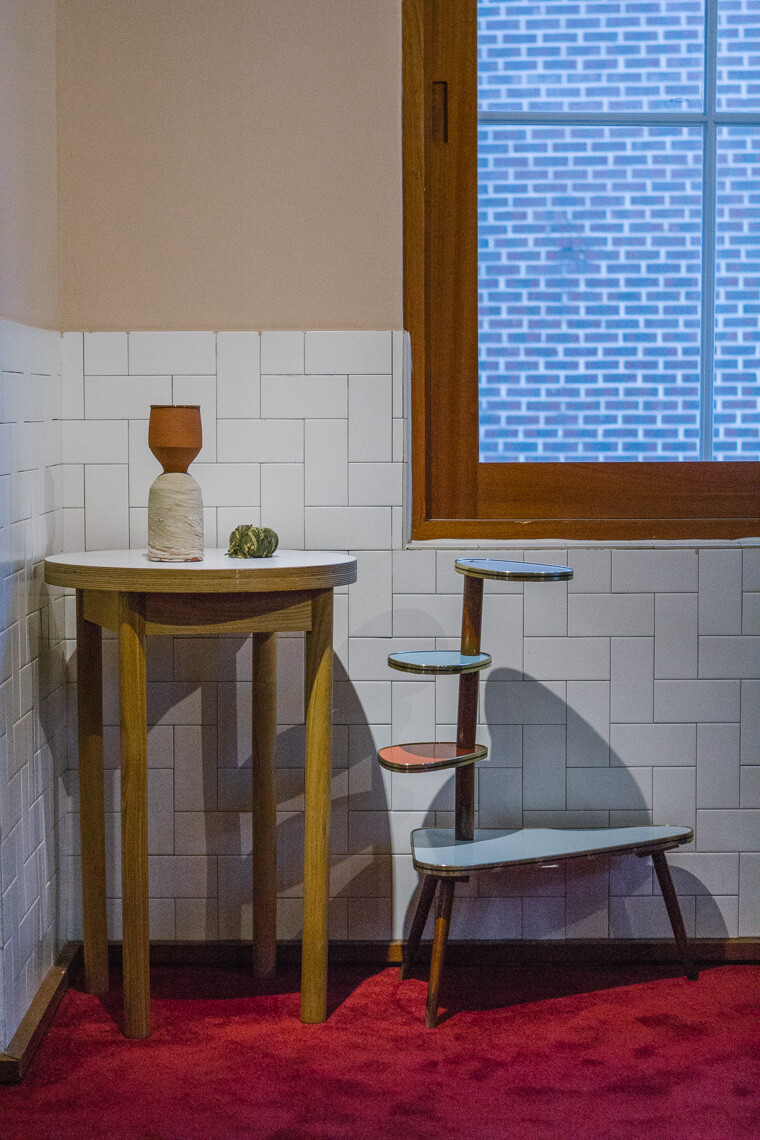 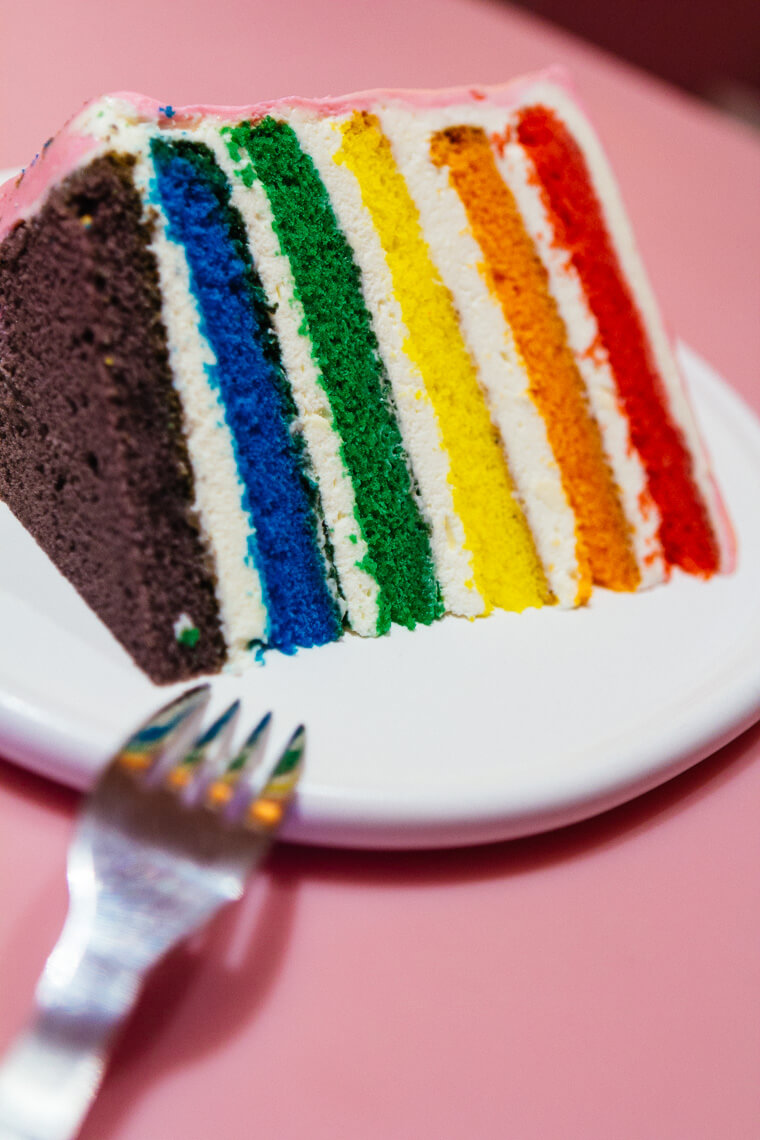 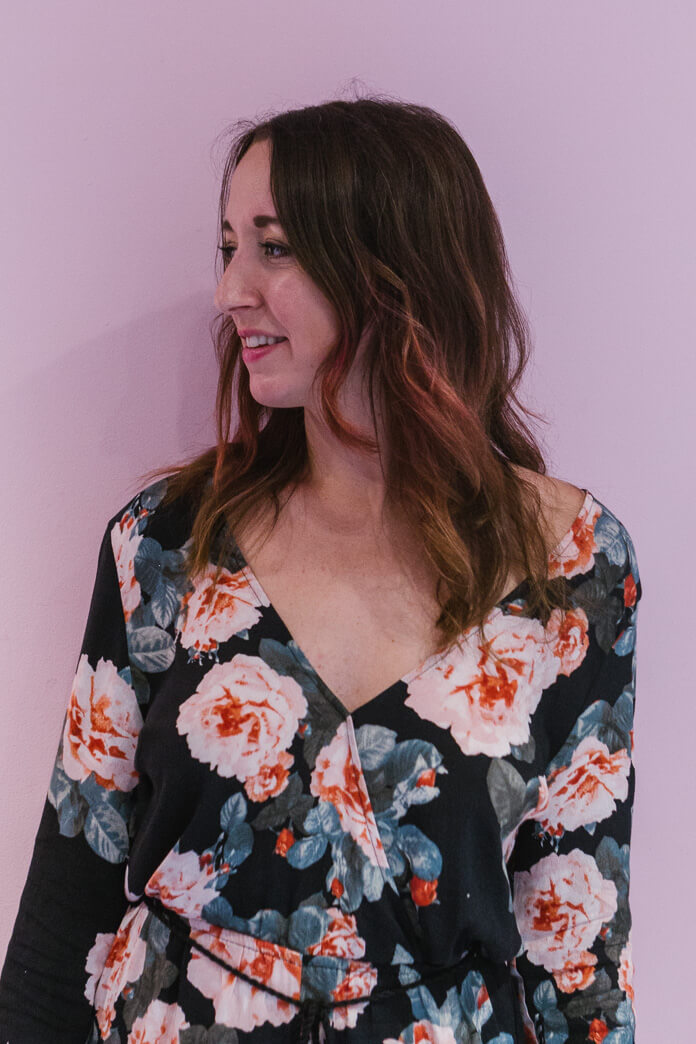 When you enter the store it’s impossible to miss the case of ornate cakes. We are talking about 8″ high cakes that all look heavenly. The one that stands out the most and what put Dore Dore on the map is their rainbow layer cake.

Without a doubt, we split a slice of the cream cheese frosted rainbow cake with our other friends. We also ordered their summer special coffee which was served on ice with a scoop of superman ice cream on it.

The coffee was a bit much, it reminded us of an ice cream float with coffee, but the superman ice cream left a weird after taste in the coffee. The two didn’t pair well together, but it looked cute. That’s all that matters, amirite?

Also, one of those tiny coffees were 6,000 KRW which is also a bit steep for Seoul. Was the coffee worth it? Well, if you’re taking a cute photo yes! For taste alone, nah.

Now the cake, holy moses did this cake TASTE and feel delicious in the mouth. Thank god four of us were splitting one slice because it was uber sweet, hence being one of the sweetest things to do in Garosugil!

I could have had a serious stomach ache if I tried to do an entire slice by myself. Especially with that superman ice cream coffee on top of it.

Talk about a sour sugar belly waiting to happen. Between the four of us we still managed not to eat all of that delectable frosting. It was just too rich and sweet to try and finish.

At 9,000 KRW a slice, again a bit steep *for Seoul*, the cake is worth it if you have friends to split it with.

You can see why we don’t frequent this area now? Two coffees and a slice of cake ran us 22,000 KRW, which again are normal for maybe cities like New York, but this is a sticker shock in Seoul where things are typically more affordable. 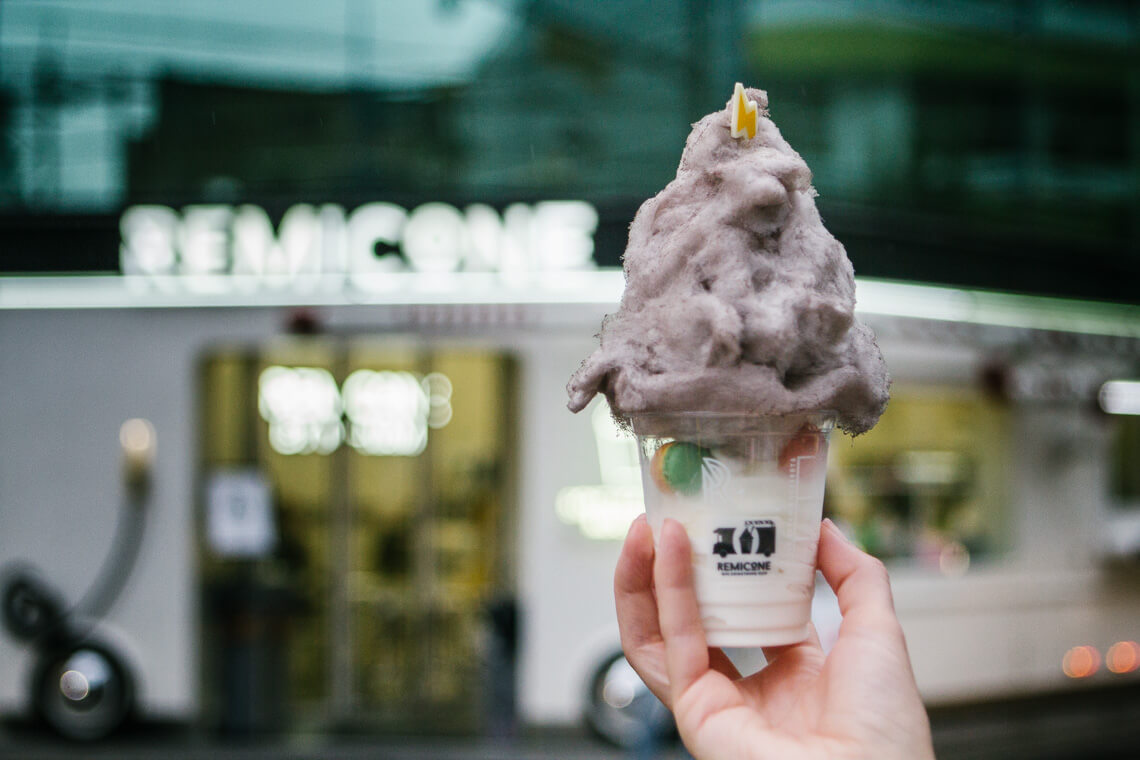 Part of the reason we shared the slice of cake between four people (and thank god we did) was so we could try the other Seoul hotspot and another great sweet thing to do in Garosugil named Remicone.

Remicone is known for it’s soft serve ice cream with cotton candy on the top. We were suckered in my the pictures of it because it looks pretty awesome.

Scott and I decided to split one ourselves and ordered the original milk flavored ice cream with macaroons and the cotton candy. We were so excited to try our first bite, but a little shocked at how SMALL this ice cream was.

It’s just soft serve ice cream guys, I can get a soft serve cone at Lotteria or McDonalds for under 1,000 KRW then go buy a think of cotton candy (that’s huge) for 3,000 KRW, this one was priced at 6,000 KRW. But you gotta pay for that Insta-worthy food!

While it might be pretty in photos, we learned the hard way that cotton candy and ice cream do not go together AT ALL. In fact, it’s impossible to eat them together in the same bite unless you bite the cotton candy, hold the cotton candy in the air, then get a spoon of ice cream. Seems like common sense, but I didn’t think of that until it was time to eat.

The cotton candy had a strange flavor for starters, then the ice cream literally tasted like milk. I know the flavor was called milk, but sometimes things get lost in translation and I figured that milk must really mean plain.

Neither of us were fans of this tiny cup of expensive soft serve, but again – do it for the ‘gram! They do get an A for the experience and vibe though! 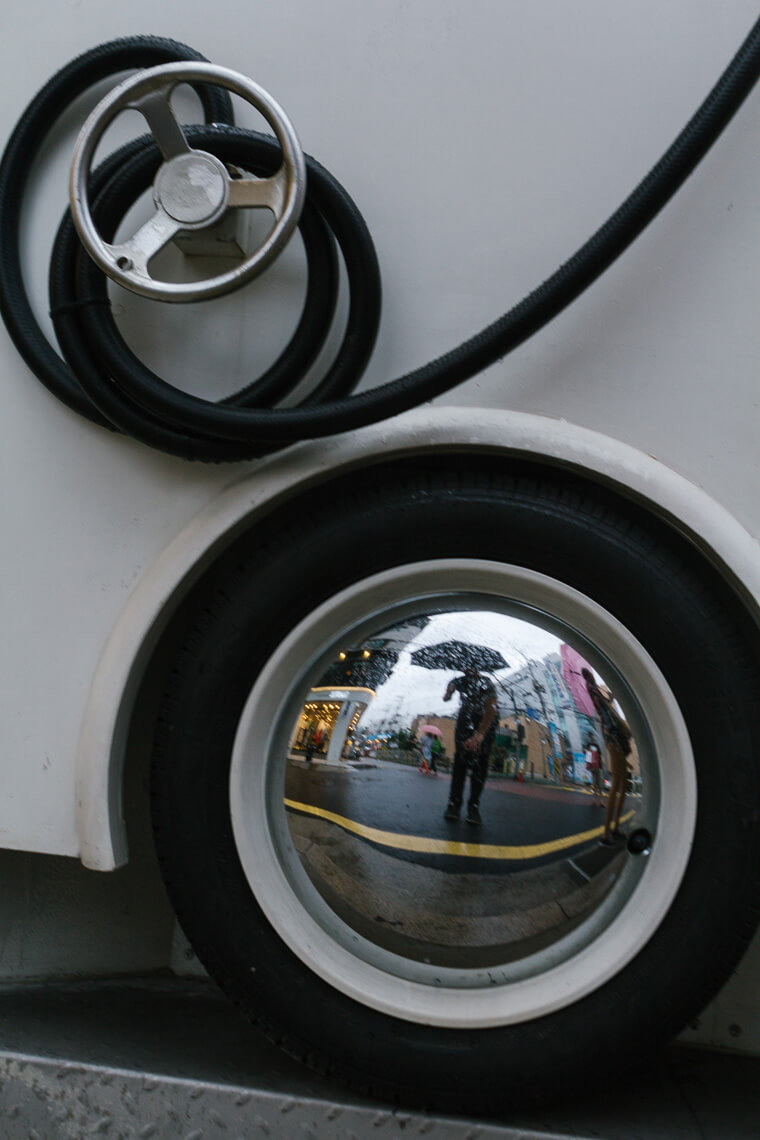 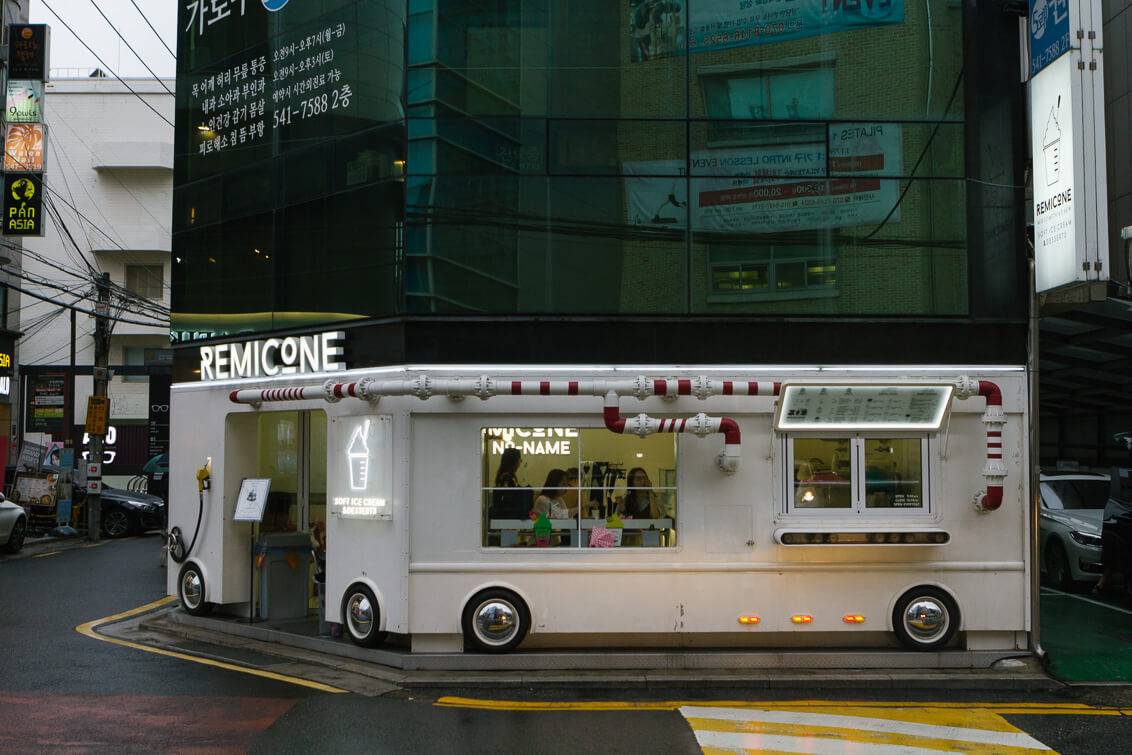 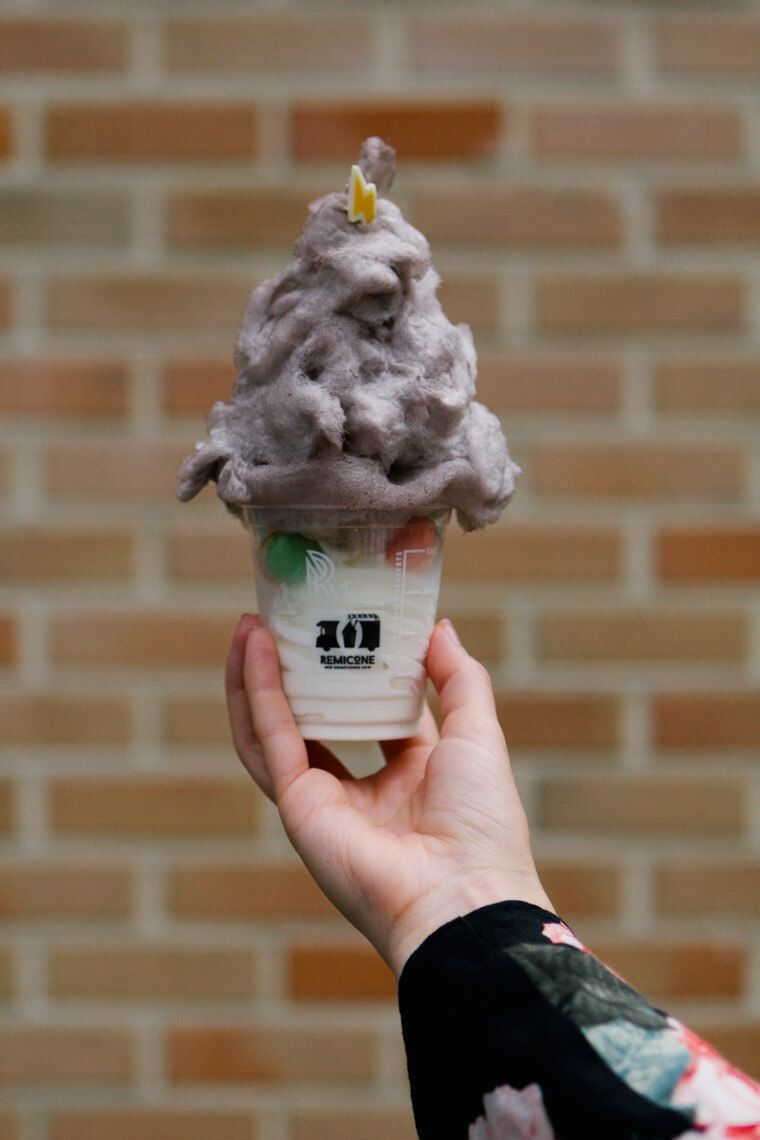 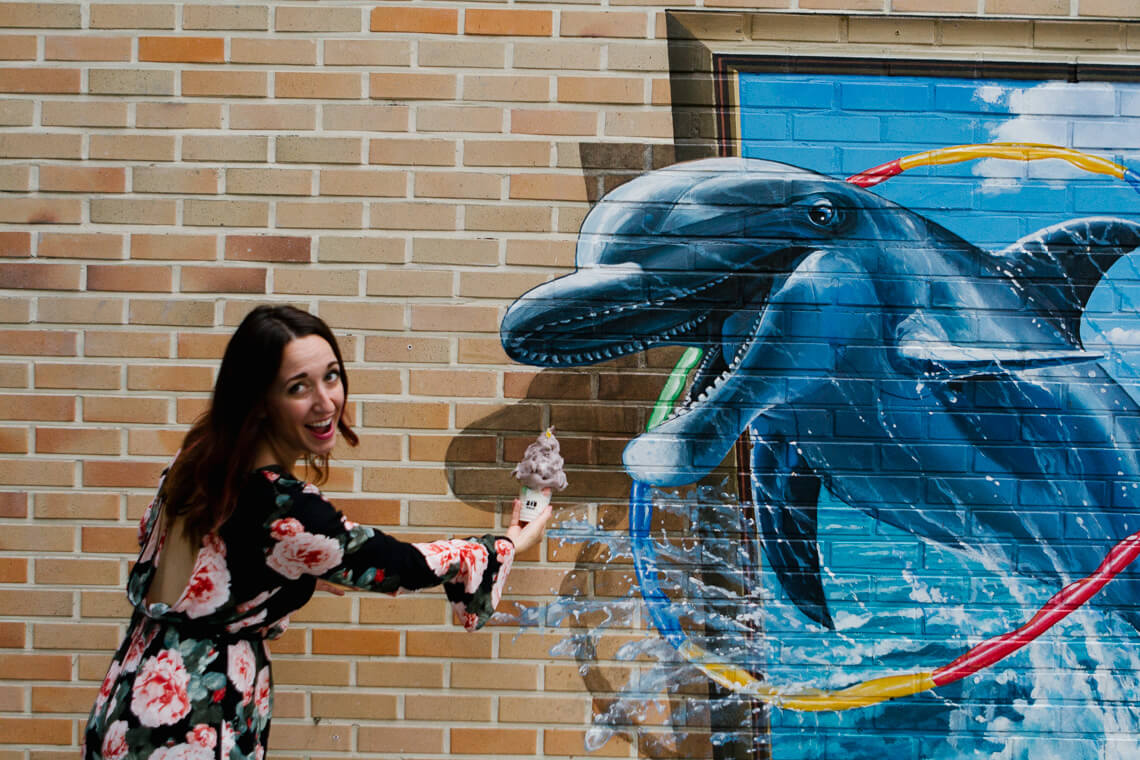 What boggled our minds even more were the signs inside saying “don’t go to the fake Remicone locations.” Apparently there were fakes!

I couldn’t wrap my head around it other than when we first got to Korea the biggest trend was putting a honey chip in soft serve ice cream. This became all the rage in Korea and before you knew it everyone and their brother was selling honey chip ice cream.

We actually tried to get it a few times and failed because places would run out. But to be fair, honey chip ice cream is incredible and the craze around it was understandable after your first bite.

So my only rationale is now this cotton candy ice cream is the new “honey chip” but this ice cream tastes like a mouthful of old socks and cold milk.

Everything in this area is a tad bit overpriced in our opinions, you can find equally as good foodie experiences in Myeongdong or Hongdae.

However, that being said, we do love exploring this neighborhood and it’s one of our picks for best things to do in Seoul as well as a great neighborhood for where to stay in Seoul on your upcoming trip! 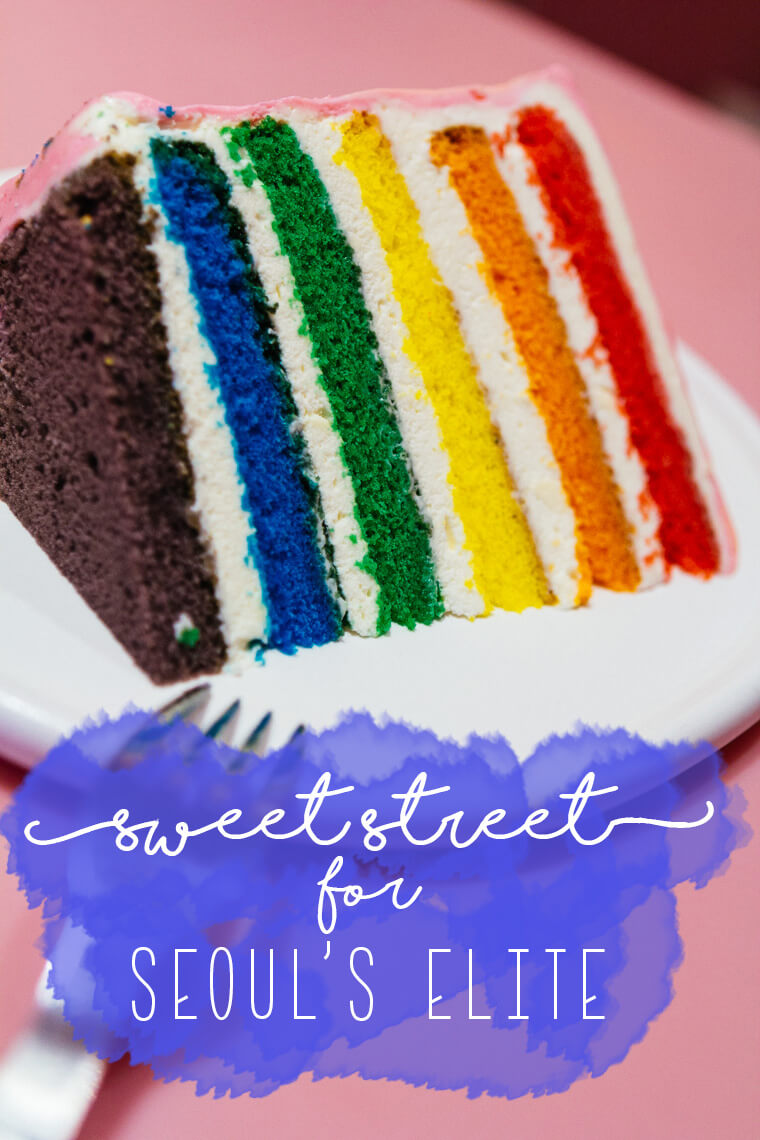